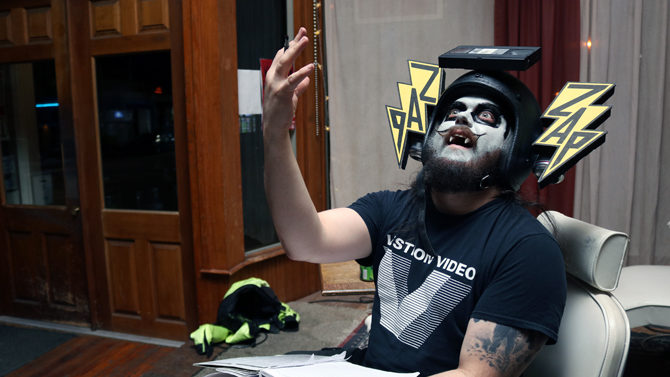 While celebrating “Treat Yourself Tuesday” by enjoying a TLT with fries at Hi-Lo in Normaltown recently, I was greeted by a loud rush of people who quickly filled up all available seating in the usually relaxing, sofa-filled section of the lounge. After exchanging a few confused stares, I heard the ritualistic chanting of pun-based team names, and it became clear—this was trivia night.

Pub trivia began in Britain in the 1970s and spread to the U.S. a couple decades later, but its origins in Athens are vague. Klon Waldrip, the host of movie trivia at Flicker Theatre & Bar, says trivia has “pretty much been the same for all of eternity.” So, what compels this strange gathering of people, who excel at answering niche pop-culture questions with amazing accuracy at lightning speed—why does it hold such intrigue? I had to dig deeper.

According to Ryan Vogel, the host of “Seinfeld” trivia at Flicker, trivia has become popular among millennials due to the “precipitous rise of ’90s nostalgia resulting from our generation’s longing for a brief respite, a desperate grasp for tangible meaning amidst a vacuous sociopolitical climate in a cold and empty universe.”

Satisfied, I infiltrated the room, pickle spear in hand, and quickly blended into the crowd of frat boys, hipsters and every other Breakfast Club stereotype. Despite differences in appearance, each group showed the same adrenaline shot of excitement every time the announcer picked up the microphone. The air was electric.

As the night continued, the six teams established a hierarchy from first to last. A few teams kept slapping each other when they thought they knew the answer to a question, and other teams seemed to have good guessers—suspiciously good guessers.

While having phones conspicuously out and engaging in loud conversations about questions are prohibited at most trivia events, the overall point is to have a nice time and learn a bunch of seemingly useless information. So, if a team is caught cheating, there’s usually no permanent penalty. That team likely won’t be eligible to win that week’s cash prize (or other free goodies) for first place, though.

Watching the competition unfold at Hi-Lo, I learned a couple things. First, these people have a hunger for information, and a desire to show off their expertise. The quick questions and know-it-or-you-don’t subject matter makes the event a sport of total recall.

Caitlin Wilson, the host of Hi-Lo trivia, affirms this. “I can’t remember to pay a bill on time, but I can tell you the exact date and location that the first Hooters was founded and the three largest in the world,” she says.

Second, I learned once again to never judge a book by its cover. The amount of information that trivia teams have stored into their memory banks is unbelievable, considering most players range from 20–40 years old, and the questions encompass all aspects of history until the present. How many readers know off the top of their head which actress has won the most Golden Globes, or what year Shrek was released? Trivia players are clever—evident by team names like John Travulva and Carly Rae Romano—and have apparently spent their fair share of time down Wikipedia rabbit holes.

Third, and most importantly, the host makes the event. Each trivia series has a different style, and much depends on the host’s effort to make his or her event interesting and unique. For a shining example, see Count Zapula, aka Jeremy Dyson, the host of Little Kings Shuffle Club’s movie-trivia series. While Dyson first seems like just another host of just another trivia night, as Zapula he has spent time and energy creating a fun backstory and questions that match.

“Count Zapula is a vampire who moved to Athens because of its reputation of being a college drinking town, figuring that it would be a target-rich environment for feeding,” says Dyson. “One night, he chose a stumbling drunk frat boy as his intended victim. As he sank his teeth into the frat boy to drink his blood, they were struck by lightning. This caused the vampire’s thirst for blood to be fused with the frat boy’s thirst for cheap beer.

“Now, instead of looking for blood to drink, he spends his days drinking PBR and watching old VHS tapes,” Dyson continues. “Now that he is no longer a threat to people, he likes to share his movie knowledge with the locals by hosting trivia nights and movie nights in exchange for beer.” 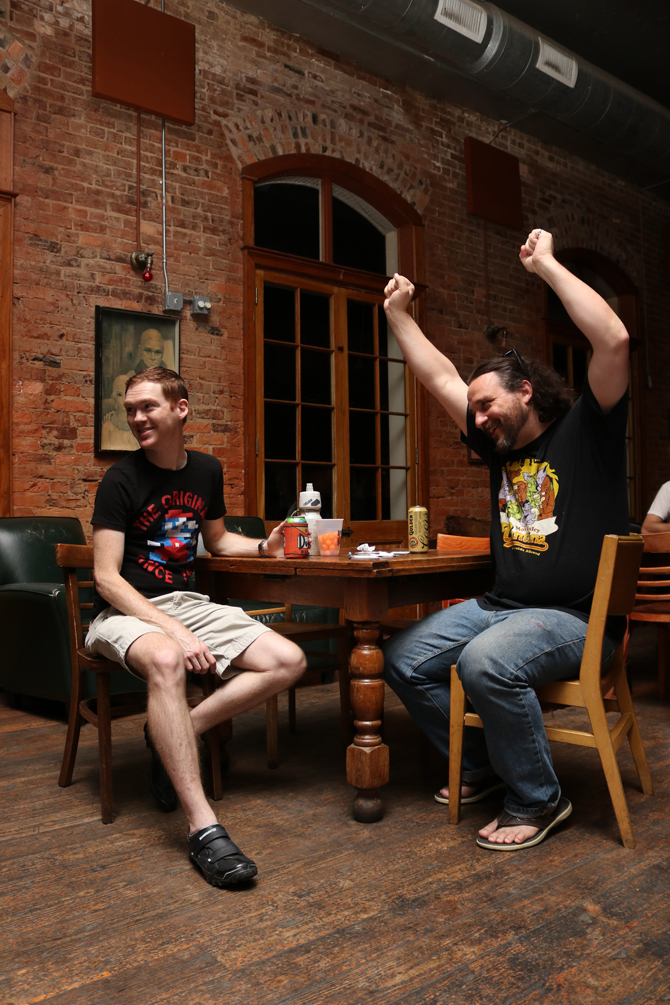 That kind of enthusiasm is generally met with an enthusiastic audience—sometimes too enthusiastic. The few hecklers that I have seen at trivia nights in Athens have been quickly shushed, or quietly escorted outside by bar staff to calm down.

Dyson’s event is emblematic of a more recent trend. While most trivia nights feature a range of topics such as movies, history, sports and music, specialized trivia has become popular in Athens. Flicker hosts many of these events, with “Seinfeld” trivia on the first Thursday of every month and monster-movie trivia once a month. Little Kings hosts rock and roll trivia every Monday, and movie trivia every first and third Wednesday.

Back at Hi-Lo, as the night came to a close, complete with a little spilled beer and a few disgruntled employees, the first- through third-place teams collected their spoils—gift certificates worth $30, $20 and $10, respectively, plus bragging rights. Although the competition was over, the teams were excited at the prospect of coming back the next week to do it all over again.

And everyone was friendly afterwards. More than many events in this hard-drinking college town, bar trivia is a surprisingly wholesome event—a lifestyle more than a hobby. Local trivia buffs genuinely enjoy coming together and testing out their chops. Says Waldrip, “Some people have crosswords… I have trivia.”

For trivia listings, see The Calendar.