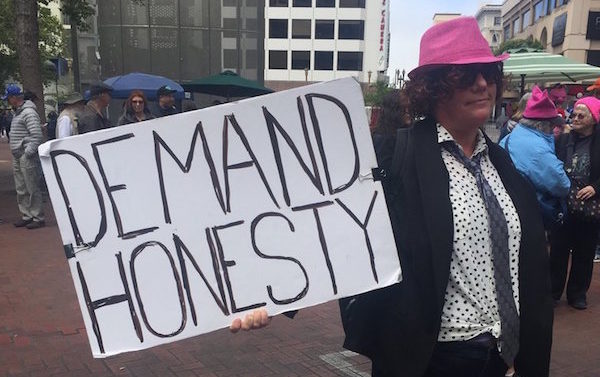 Gretchen Spieler, 53, a protestor at San Francisco’s March for Truth on June 3.

Ten members of St. Gabriel’s Celestial Brass Band gathered at the trolley turnaround at the corner of Market and Powell St in San Francisco last Saturday. The New Orleans second-line brass band usually just “marries ‘em and buries ‘em,” as one band member told me, but today the band volunteered to lead a Market Street procession of protesters gathered for the the San Francisco March for Truth.

The Celestial Band, wearing their uniform of red polo shirts with the band name on the back and black pants, warmed up with a version of “When the Saints Come Marching In.”

But it wasn’t New Orleans that was on the mind of many in the crowd. It was Russia.

Across the country, there were marches for truth scheduled to take place in 150 cities. The stated objective of the march was to call for “urgent investigations into Russian Interference in the US election and ties to Donald Trump, his administration and his associates,” according to the #MarchForTruth national organizing website.

A small group of protesters were dressed as FBI agents, wearing black suits, faux earpieces and fedoras—a nod to the FBI’s investigation of contacts, if not collusion, between the Trump campaign and administration and the Russians. Former FBI director James Comey, who was fired by Trump at least partially because of the investigation, is expected to testify before the Senate Intelligence Committee on Thursday in his first public appearance since he was fired.

Gretchen Spieler, 53, an interior designer from San Francisco is a self-described introvert who has never been involved in politics. Until now.

“I am hoping that Comey really hands it to Trump in the hearings next week and gives him his head on a platter,” Spieler said while clutching her “Demand Honesty” sign and wearing a black suit and pink fedora.

“Trump has pushed me outside of my comfort zone. I don’t even like to talk to people most of the time but this to me feels like it is the only thing I can do,” she said as a car drove by and the driver honked at the crowd.

Spieler started to cry as she talked about Trump. “This is the worst thing I could ever think of happening in our country. He is pulling the rug out of America’s democracy,” she said with tears streaming down from behind her black FBI-style aviator sunglasses.

Margaret Herzen, 70, and her husband Michael Herzen, 78, came to the event even though they had other things to do. “There is always something else to do. But I thought it was important to show up,” Michael said.

Margaret knows about Russia and authoritarianism all too well.

“I am an immigrant, so I know what I’m doing here. My father was born in Russia. We were displaced persons from World War II,” she said.

Margaret sought asylum in U.S. as a refugee in 1956. “I lived in the refugee camp Trieste in Italy, where displaced persons went while waiting for their visas to countries that were welcoming them, like the U.S,” she said.

“I have a very guttural and visceral experience of totalitarian regimes, and this really smacks like we are headed that way. Not that we’ll end up there, heaven forbid, but I mean it does feel that way,” Margaret lamented.

Michael Herzen, a retired professor of Russian history, is skeptical about the impact of marches like this one.

He said that today’s march remind him of what happened to the small group of protestors who were shot at in the Bolshevik revolution in Russia. He said that the small numbers of protesters caused them to be exposed. “They never would have been shot at if they have been 20,000 people instead of 200,” Michael said about the 1917 Russian protest.

“I get a lot of sadness from being here, because there are not 20,0000 people. I am hoping that at the next one I attend that there will be 20,000,” he said, “If it is like this every time, it is a downer and not enough to make a difference.”

Marchers approached Justin Herman Plaza across the street from the SF Ferry Building, where they were met with a five-foot-tall paper mache Donald Trump Russian doll flanked by march organizers dressed in FBI garb.

The mock FBI agents unveiled each Russian doll one at a time with the crowd guessing who was next. A protestor shouted, “Flynn!” and then “Lock him up!” when the Gen. Flynn Russian doll was revealed. In total, there six dolls revealed: Trump, Pence, Kushner, Page, Flynn and a tiny Putin.

Rohini Prabhu, 23, an engineer from Singapore worked with a group of a dozen artists to create the Russian dolls. The group used chicken wire, paper mache, and “gallons of house paint.” Prabhu doesn’t think this will be the dolls’ only appearance in San Francisco.

“This is not a one time use. They will make appearances around the city,” Prabhu said. “Every time you listen to the news there is another person involved in the scandal and we’ll have to have more dolls coming up probably.”

I asked Christine Pelosi, Rep. Nancy Pelosi’s daughter, who spoke at the event, what she thought of the life-sized Russian dolls. “The arts are going to save us from Donald Trump,” she said. “A great country can survive anything, including Trump, but beautiful protest art really just brings people together and gets us out of ourselves and into a common humanity.”

Art Contest’s Two Songs Was Two Years in the Making