Art Contest’s Two Songs Was Two Years in the Making 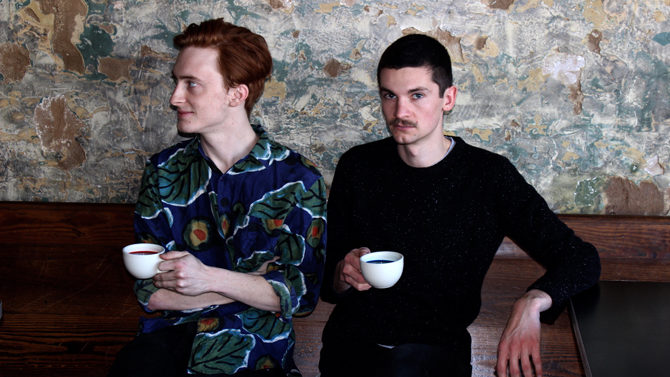 Math rock is characterized by rhythm. Its bands pay excruciating detail to time signatures, but allow enough wiggle room to change everything at a moment’s notice. In a sense, math rock is organized chaos. However, much like the concept of mathematics itself, it sticks to a set of predetermined rules. And sometimes, math is too strict.

True to its mission, Art Contest often plays a game of “why not” with its music. A song that has two lyrics? Why not? Naming an album Two Songs, even though it has more than two songs? Why not? Monroe explains the title of Art Contest’s new album, which is finally out this week after years of fits and starts.

“Garrett and I were sitting inside of The Whig, a bar in Columbia, SC… and we were coming up with a title for the album by throwing semi-thoughtless phrases around… There were two candles on the wall, and so I joked, ‘What about Two Candles?’ which we both agreed was a terrible idea. But I pretty quickly in that moment tried changing the word ‘Candles’ to ‘Songs.’ When we said it out loud, both Garrett and I were like, ‘Oh, well actually…’”

Art Contest began making waves with its debut album, Math Major, in 2014. The record featured a slew of intrinsically goofy tracks, the kind that seem ridiculous on first listen but click when you least expect it. With ambiguous lyrics matched by tight, technically sound guitar and drum parts, Math Major was an exercise in controlled chaos. Art Contest created a world entirely its own, and invited listeners in.

With Two Songs, Art Contest has grown. The album retains the same fun, energetic—but sometimes intentionally lethargic—spark, while refining the band’s compositions through trial and error. Given that the album took two years and two recording periods to finish, it makes sense that it is twice as confident as its predecessor. Two Songs is cohesive and coherent; every song feels like it was meant to be right where it is.

“Wall Ball” and “Tokyo Megaplex” were released in 2015 as singles on the Art Contest Bandcamp page, then re-released in April 2017. The two versions relay different messages through the same songs, and show different stages of Art Contest over the process of making the new album. A peek into the world of music creation, the two songs serve as intimate conversations with Burke and Monroe themselves.

“’Tokyo Megaplex’ is one of the first songs Garrett and I both put together and then recorded,” says Monroe. “After both playing it through for the first time and putting it together in the studio, I think we both had a genuine moment of ‘Damn, we really did that.’”

The group’s influences are clear. Two Songs’ title is directly influenced by Animal Collective’s Sung Tongs and Campfire Songs—an inspiration that also appears in Art Contest’s guitar melodies and vocal styles, among other things. The album’s format was influenced by Flying Lotus, the guitar tone by Grizzly Bear’s Daniel Rossen.

There are some unexpected sounds, too. “Both Garrett and I are into… footwork and juke music, mixed with hip hop and other electronic influences,” Monroe says. “It’s a kind of music that prides itself in its technical, thoughtful capacity, accessibility, danceability and sonic experimentation and exploration.”

So, with influences as wide-ranging as that, what exactly is Art Contest? Monroe searches for the answer.

“Art Contest is a form of pure, practically unconscious expression,” he says. “I feel there is a strong sense of repressed and heavily calculated emotion and action around me… It would be wrong of me to say I’m not like that myself sometimes. But I sincerely attempt to not think so much and be myself in the purest way possible with this music.”