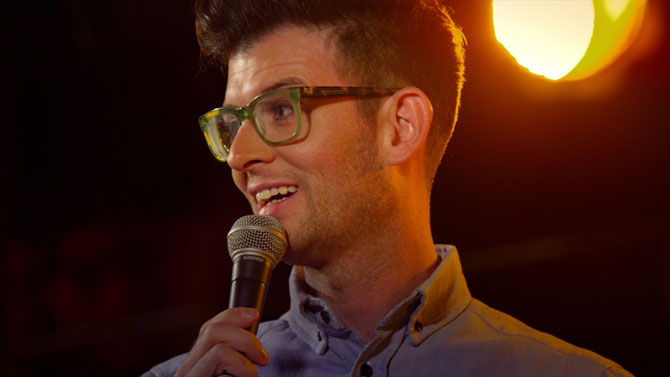 Interviews with comedians are tricky—especially comedians like Moshe Kasher. Kasher is extremely sarcastic, which basically means his jokes (about, say, never bombing once in his entire career, or waiting for the expiration of his contract with the Zionist cabal that controls the world’s entertainment industry so he can scale back the Jewishness of his act) don’t translate well to print. A veteran of countless interviews, Kasher knows this, but he can’t turn off the defense mechanism.

“Every comedian has had the experience of a person latching onto very weird, sincere themes, where you sound like, ‘I’m a self-important, overly serious, saccharine kind of asshole,’” Kasher says. “You just pepper these little jokes in, in the desperate hope that your interview will come off like, ‘This guy knows how to have a good time in an interview.’”

So, without dwelling on specifics, take it from this writer: Kasher actually seems like he knows how to have a good time. In interviews, most comedians tend to either refuse to make jokes, lest they spoil their act or see their humor lost in translation to print, or force prepared and print-tested answers, regardless of whether they address the question asked. But Kasher is off-the-cuff funny in a way few comedians are.

At Slingshot, Kasher is performing with Nate Bargatze, whose sparklingly clean act is a stark contrast to Kasher’s blue-as-the-deep-sea routine, reflecting their divergent backgrounds. Kasher’s act touches on his upbringing, split between Brooklyn with his Hasidic father and Oakland, CA with his atheist hippie mom, as opposed to Bargatze’s, which Kasher describes as an “articulated defense of the Tennessean in him.”

The bill at Slingshot’s Comedy Night also includes Luke Fields and Caleb Synan, who both have Athens ties, and Atlanta’s Cherith Fuller.