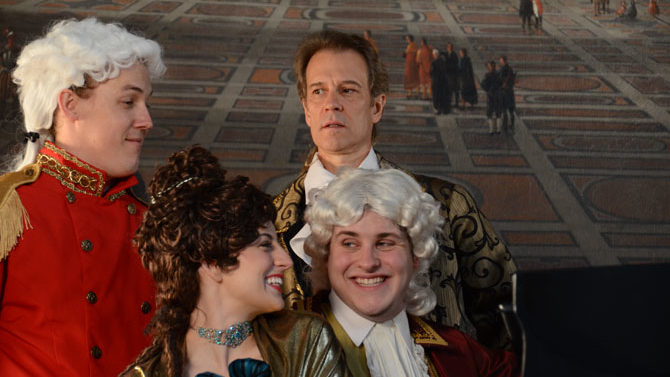 While we have been told since childhood that each of us is special in his or her own special way, the hard fact is that most of us are destined to live out our lives as worker bees, one or two paychecks away from skid row and taking our simple pleasures where we can. We lack the crucial mix of talent and ambition that leads to extraordinary lives of brilliance and fame. It follows then that people who do achieve these heights are wired differently than the rest of us in all sorts of bizarre and shocking ways. In order to appreciate genius, it is often necessary to separate the artist from the art.

The inability to do this very thing is the tragedy that drives Peter Shafferâ€™s play Amadeus. For those unfamiliar with the play or the Academy Award-winning 1984 film, it is the story of the rivalry between Wolfgang Mozart, the wunderkind prodigy who composed some of the most enduring music of all time, and Antonio Salieri, composer for the court of Austrian Emperor Joseph II, who discovers that his rising star has been eclipsed by a vulgar, giggling man-child who possesses a natural talent that dwarfs Salieriâ€™s own and causes him to declare war on God.

Music, empire, blasphemy and revenge. It takes a sure hand and serious skill to bring these themes to life, and the Town & Gown Playersâ€™ production of Amadeus does not disappoint. Director Terrell Austin and her cast and crew have put together a remarkable show, one that will please the eyes and challenge the mind.

Told in flashback by an aged Salieri (Allen Rowell) in his last hour of life, the play opens with the highly anticipated arrival of Mozart (Patrick Naijar) in Vienna. Having gained fame as a child with his ability to play blindfolded and compose concerti, the adult Mozart is preceded by rock-star buzz. Salieri, eager to learn what all the hype is about, is blindsided at a party when he discovers Mozart rolling around on the floor with his girlfriend Constanze (Chelsea Toledo) and then hears one of his compositions, a work of such wondrous ability that Salieri is convinced it must be a fluke. He soon discovers, however, that Mozart is the real deal, a fact that he alone in the court of the tin-eared Emperor (Tim Dowse) and his conservative lackeys realizes. Maddened by envy, Salieri curses God for afflicting him with personal mediocrity and a torturous appreciation for his rivalâ€™s unique acumen. He vows to destroy Godâ€™s unworthy vessel and dares the Creator to stop him. Unfortunately, despite his talent, Mozartâ€™s unwillingness to compromise and kowtow to the court, coupled with his egomania and wretched excesses, makes him fairly easy to destroy.

This is a flat-out gorgeous production. The set is stately and baroque, done in gold and burgundy and faux marble. Scene changes are accomplished through the movement of furniture and the use of a giant picture frame with changing images appropriate to each scene. As is to be expected, the costumes are bright and brocaded approximations of period dress (I want Salieriâ€™s second-act coat so badly it hurts) and, amazingly, nobodyâ€™s powdered wig looks ridiculous.

As for the performances, the rest of the cast is very good. Naijar is appropriately over-the-top as he puts his Mozart through his giggling, petulant paces, and Toledo is a charming ingÃ©nue; they make a cute couple. Dowse is wonderfully dense as the Emperor, and the courtiers conduct their intrigues with the requisite pomposity. The play, however, belongs to Salieri, and this production belongs to Rowell. Onstage for virtually the entire play, shifting visibly between Salieriâ€™s older and younger selves, and running the gamut from rage to remorse while hitting all the stops in between, Rowell delivers an intense and mesmerizing performance that put me very much in mind of John Malkovich when heâ€™s eaten his Wheaties. Never mind that this is community theater; there are professionals who couldnâ€™t pull off this role so well. Seriously.

Fair warning to parents: this is a long production, clocking in at over two hours, and it incorporates some adult language and situations. This is definitely a play for grown-ups, so find a sitter if you have to, but make plans to see Amadeus.