I saw him play in Houston once, so that makes me one of a privileged few… but wait! I’m already ahead of myself. Let me start at some sort of beginning—Hop’s worth that.

Some years ago, I ran a record shop in Athens. I mostly sold 45’s, but whatever LP’s came in would be fair game, too. Over time, I developed quite a regular clientele. Some of these friendships. cemented then, still flourish today.

One staunch regular was Rob Hall. He loved blues and real “roots” music, and he was one of the first people I called when a book crossed my desk chronicling the story of Goldband Records of Lake Charles, Louisiana. Established in 1947, Goldband started with nothing but local Cajun bands and expanded into blues and rockabilly as tastes changed and need arose. The book gave an address, so at Rob’s behest, I wrote off for a catalog. A week later it, too, crossed my desk, fairly shouting its arrival.

Artist after artist graced its pages: folks unknown to me with names too delicious to be imaginary: there was Juke Boy Bonner, Mad Dog Sheffield, Hopeless Homer, Katie Webster, Jay Chevalier, Guitar Junior, and Hop Wilson and His Chickens. Checking names in the catalog against photos and text in the book I already had was easily accomplished over a few beers, and a first order was immediately prepared, a check written, and alternates listed in case something was out-of-print. The next day’s mail slid off to P.O. box 1485, Lake Charles, LA. 70601. 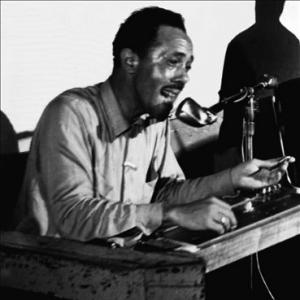 A tense week passed. Specialty Records’ order arrived, as well as something from a one-stop. Then, looking just like any other little box, in wandered the Goldband shipment. I called Rob. This time I bought the beer and we retired to his Tibbetts Street duplex to audition our treasures. When we heard Hop Wilson play the mind-shattering steel guitar solo on “Always Be In Love with You,” we both broke and cried. When we recovered, we flipped the record over. When we heard Hop lament “Can’t find no job, can’t pay my rent and bo’d,” the tears began again. Another solo too amazing to be real flew like lightning from the speakers as notes struck in 1958 lived again. “Broke and Hungry,” read the title. Goldband # 1078. We drank a toast to Hop and to Edison and the amazing process that could put Hop in a living room in Athens, Georgia 16 years after-the-fact. The other 45 by Hop, record # 1071, “Chicken Stuff,” proved to be out-of-print. we concealed our meagre disappointment by enjoying what we did have. “Every One A Musical Treat,” their slogan, rang mighty true: even though we were “Chicken Stuff”-less, we were listening high on anyone’s hog.

Time went by and a vacation-of-sorts was planned. We both needed to get away, so we suggested to each other that a trip to Louisiana might be in order. “Maybe we can track down T.K. Hulin,” Rob offered, grinning merrily at the concept. “Eeeeeee!” he exclaimed, glad to be alive. Hulin is a legendary Cajun singer known as “The Voice With A Tear.” He is still active, as far as I know, in St. Martinville, Louisiana as I write. T.K. is most noted for his record “I’m Not A Fool Anymore,” originally released on the local L.K. label and leased nationally to Smash where it charted to # 92, selling 100,000 copies in two weeks in Louisiana and Texas alone. That was, and likely still is, Rob’s favorite record of all time. It’s up there on my list, too. One sticky summer day, we left.

All went well. We hunted records, ate plenty, and slept enough. He and I agreed that we should make a pilgrimage on to Lake Charles since we were in Lafayette already, so on 70 miles we went. Goldband Records was easy to find it: it squats right beside the Interstate at the corner of Church and Ryan Streets, a scant block from an exit. We were there in a flash. Once inside the converted church, owner Eddie Shuler welcomed us like family and took us up to the attic, which served as the warehouse. He later confided that he noticed that neither of us smoked, and that was why he allowed us free rein. We sneezed and hunted for two days, passing box after box of titles we knew and discovering some we didn’t. After lunch at Phillips’ Cafe, open since 1946, (I still remember how good the beans were), we returned to 313 Church Street and went back to “work.”

I was the one who found it. It was crammed clear back in the corner. If I could take you there, I could still show you just where it sat, forgotten, ignored by collectors. “Rob! Take your nitroglycerin!!” I hollered to my friend across the way. He came a-running as well as anyone can in an attic and I handed it to him. “Goldband # 1071—100,” he read, shaking. We had located the last copies of “Chicken Stuff” in the world. We took them downstairs, showing them to Eddie Shuler. “You boys sure are lucky,” he allowed. “The last ones of those went out of here 8 or 10 years ago.” We took half, reboxed the other half, and resecreted them for someone else to find.

The road beckoned. Since neither one of us had been to Texas, we lit out to Port Arthur to cruise Proctor Street just once, reasoning that Janis Joplin must have been right. She was: she managed to get out of that city, one of the most utterly run-down places I’ve ever seen. Some rare records more than made up for the lack of scenery in the tough waterfront town. We hit Beaumont with some success and decided to go ahead to Houston for one day. Time was getting short, after all.

We hit 86 thrift stores and were preparing to blow town when we heard a radio show on the famous Pacifica station in Houston: the one the Klan tried to silence with dynamite; the one the played The 13th Floor Elevators and Lost & Found and The Red Krayola and Bubble Puppy: really amazing stuff: the hippest music of the late ’60’s and early ’70’s, and all of it out of Houston. This show was on local blues, and we were assured that there was still an active “scene” for blues in Houston. I called in and asked about Hop Wilson. The host less than generously allowed he’d heard of him, but that was all he’d say. “You might try calling Ivory Lee Semiens,” he sniffed. “He used to play with him. He’s in the book.” We did: the line was busy.

The next day, our last thrift store turned out to be two blocks from Ivory Lee’s house on the teeming Southside. The line was busy again. We drove over. It was like a dream. Ivory Lee Semiens was home. His kids stayed on the phone, he told us, and he was playing with Hop the very next night at a place down on Scott Street. “It’s a pretty rough place, but you with me, won’t be no trouble,” he confided. We floated back to the motel, ate one hell of a supper to celebrate, and slept mighty little.

The next night, we drove back to Ivory Lee’s, where he greeted us heartily. He was wearing his best suit. ” I always get dressed up when I go hear Hop,” he offered. “Hop don’t play no working-clothes guitar.” We maneuvered that knot of streets the form the Southside to a small white-frame beer joint next to a railroad yard: the kind of place that has “rough” up in neon next to “Pearl” and “Falstaff” and “Lone Star.” We slid in early, way into the back booth, and soon a slight, light-skinned man limped up to the makeshift stage. For the next hour, we sat transfixed: this guy played a lap steel guitar like nobody else could. There is no frame of reference to deal with the likes of Hop, a true original. “Nobody can play no guitar he’s tuned for himself,” Ivory informed us. “His tuning don’t be in no ‘struction book.” Then Hop took a break: he was told to expect us, and came over and introduced himself and took a seat. He was from up by Crockett, Texas, he told us, and was a disabled Korean War veteran. He played on weekends, mostly, to earn pin money. “You don’t put up with no drunks for no living,” Hop opined, “’cause you can’t always depend on bein’ able to make it that way. You got to play for what’s inside you, to hell with WHERE you play, that’s not as impo’tant as THAT you play.” Ivory Lee agreed. “We done played in some tough joints, ain’t we? Remember Irene’s over by Navigation? Feller got killed in there, we jus’ kept on playin’.” “Knew better than to stop,” Hop added. “Some of those times, you quit playin’, you be next. I done felt a knife enough by the doctor; I don’t reckon he need no drunk jivin’ help.”

We drank deeply of our Lone Stars and Pearls, toasted each other and life itself, and then the treat began. The music started again, and Ivory took off his suit coat and went to town playing drums and singing. He and Hop did fifteen minutes’ worth of “Rockin’ In The Coconut Top” and Hop sang both “Always Be In Love With You” and “Broke and Hungry.” Then they lapsed off into  an extra-long “Chicken Stuff” that got wilder and wilder. We shook Hop’s hand mightily at the end of the performance, took Ivory Lee home, and then crawled into our beds. We fairly floated back to Athens, making the trip virtually non-stop, fueled by our experience.

A year later, Hop dies in the Veteran’s Administration Hospital of brain disease. His last gig was two weeks before his death and he had to be assisted to sit up, but he kept on playing as if to satisfy that demon within him. Virtually unknown by white audiences at the time, Hop’s name was a legend among working Black folks in Houston. People took him for granted in the Community, as he played fairly often. He is, doubtless, still missed by those he entertained. Johnny Winter took “Black Cat Bone” from him, but Robert Cray paid righteous tribute to Hop on the LP he made with Albert Collins and Johnny Copeland for Alligator Records… and bless him for it!!

As for me, I’m gonna go out to Texas as soon as I can. Spring will be here in a flash, fields will fill with flowers, the sun will warm again: this is as sure as death and taxes. I’m gonna go to Grapeland, drive west on F/M 2544 for 12 miles or so, turn off south, and pull off at Mt. Zion Cemetery and visit Hop: he’s worth the trip. Out of the radio speaker as I write comes Robert Cray’s tribute to Hop off the album I mentioned before, and it couldn’tve been better timed. “HOP WILSON LIVES!!” would make a great bumper sticker.

I visualize his “cowboy” lap steel guitar, orphaned, sitting in a pawnshop on Dowling Street; someone buying it, not knowing its significance; them trying to play it and having to stop to retune it. “Whoever had this sure tuned it weird,” they lament. If only they knew why. I think of a quote I cannot attribute at the moment: “Talent learns chiefly from others; genius learns mostly from itself.” Hop Wilson was a musical genius; he is not forgotten. If anyone out there knows about Hop, especially anyone in Texas who reads this, I’d love to hear from you. My latest address: Ort, P.O. Box 120, Arnoldsville, GA 30619. Thanks for your time.