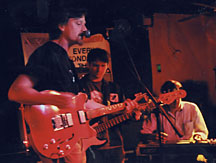 Ben Mize’s 2002 album Nantahala is about as Athens-y a local release as you can get; it encompasses numerous aspects of the local scene while still remaining a cohesive and unique whole. Any number of musicians will tell you they could take their show international if, y’know, they really wanted to. Mize is the kind of artist who can (and has) but resides in the nurturing environment of Athens by choice. He famously tagged along with alternative mid-level success Cracker in the early 1990s; it was through this touring gig that the Counting Crows tapped him for a full-time drum stint. “I certainly enjoyed my experiences, but I was always anxious to get to my own songs,” says Mize in a recent press release. “Being in a band is a full-time thing, and didn’t allow enough time for my own stuff.”

“I’m most excited by non-traditional venues,” says Mize. “I’ve had some of my best reception at places other than the usual.” Keeping in that vein, the Ben Mize Band also performs this week with local world-folk duo Dromedary at the Botanical Gardens on Tuesday, July 13.