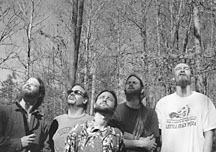 The local acoustic-based fusion group Little Green Chairs underwent a slight lineup shift in late 2003; the group decided to take advantage of the cold winter months by holing up and refining its sound. “We re-rhythm-sectioned, if you will,” says Dan Roth, the band’s guitarist. “We co-opted Papa Funk, whose keyboard player left them several months back, so Little Green Chairs picked up the remaining players and basically just took off with a new sound. There’s just a lot more more going on, if that makes sense.”

The addition “The sound’s full, for sure,” says Roth. “Little Green Chairs is [singer] Ryan Taylor’s baby, really, and he’s gotten it to the point where everything we play is wider than a football field, really.” Taylor and bassist Paul Fulbright have performed together for more than 12 years, and the familiarity has allowed for an organic, fluid relationship to form, according to Roth. The band blends funk, reggae, bluegrass and jazz into a curious blend that is less self-indulgent than most of the bands falling into the “jam” category.

“Well, I’m not much of a guitar wanker, and I never intend to be one,” Roth says, “I’ve always thought that less is more with a guitar, so a lot of pressure is off me to do some crazy ripping solo because our new saxophone player Luke is perfectly comfortable doing melodic solos, and that’s a huge plus.” Little Green Chairs has plans to go into the studio in the fall in an effort to scratch to wax the still-fresh energy of the new lineup, according to Roth. He adds, “We’ve also got some big plans with the Theatre for when the students get back in the fall, so watch out.”