Everything You Need to Know About the Solar Eclipse 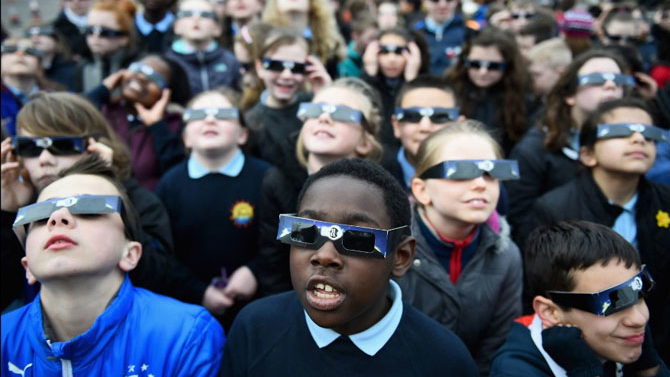 Sometimes it can be easy to get caught up in our day-to-day routines. After all, who could get anything done while constantly thinking about our minuscule place in the cosmos? It’s tough enough to remember where we put our keys, let alone that we live on a twirling ball inside a spinning disc inside a swirling cloud. But then things come along that lift the veil of everyday life and remind us that, hey, space is the place. Things like the Aug. 21 total solar eclipse.

An eclipse occurs when our sun, moon and home planet are in alignment. The moon moves between Earth and the sun during the daytime, casting a shadow on the face of the planet. The moon can cover part of the sun or the whole thing.

Why is this one a big deal?

This is the first time the path of totality (where the sun’s light is completely blocked) will pass across the entire continental United States since 1918. People in Oregon will experience an eclipsed sun rising above the ocean. Here in the Southeast, we’ll have an afternoon delight. Georgians in particular are excited because the path of totality will cross the northeastern part of the state, and spots not too far from Athens—like Lake Hartwell and Clemson, SC, among others—will experience a total solar eclipse. 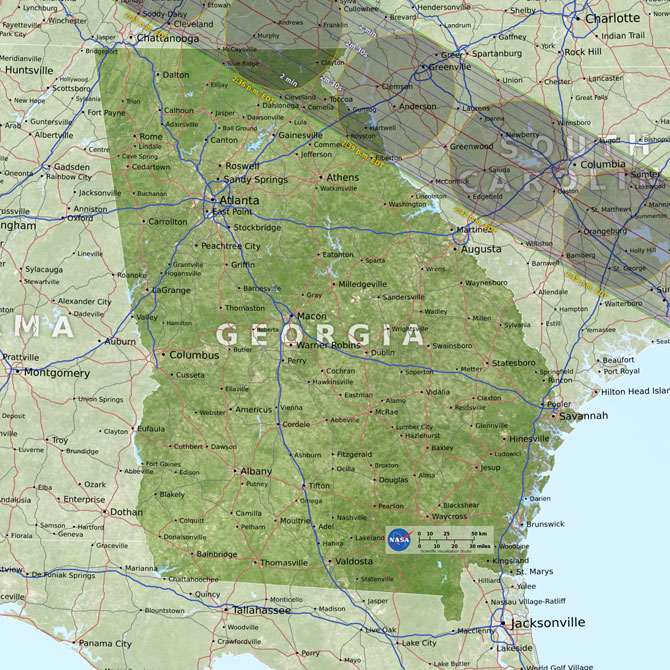 When does this happen?

Monday, Aug. 21. Times vary depending on where you happen to be; if you’re here in Athens, the eclipse will peak around 2:37 p.m. Things will start to get dark about an hour before that, as the moon moves in front of the sun, and last for about an hour after that.

Will I be able to look at the eclipse?

If you’re in Athens, the only way it’s safe to look at a partial solar eclipse—remember, Athens is not in the path of totality, and the sun will only be about 99 percent covered—is with ISO-approved protective eyewear. (Beware of sketchy products on the internet that may or may not be ISO-approved, even if they claim to be. The American Astronomical Society has a list of reputable vendors.) Do not look at the eclipse without protection. Even then, you should look away from the sun regularly, as the rays of the sun can heat the liquid inside your eye even with protection.

If you make the brief trip to the path of totality, about 45 minutes (traffic permitting) north or east of Athens, you’ll still need protective eyewear to look at the sun when it’s partially covered. However, during the two-and-a-half minutes or so of totality, when the moon completely blocks the sun, you’ll be able to stare directly at the eclipsed sun.

“It’ll be like a deep twilight” here in Athens, says UGA geography professor and meteorologist John Knox. If you travel to the path of totality, think of an even weirder twilight. And only in the path of totality (free band name, btw) will you be able to see phenomena like the diamond ring (another band name)—the eerie moment when the last sun rays peek from behind the moon—or Baily’s beads (another band name), which is the gorgeous twinkling of light that intermittently occurs around the border of the moon during totality, made even more mind-blowing when you know that it’s caused by light making its way past craters and mountains on the surface of the moon.

What if it’s cloudy or raining?

That’ll put a damper on things, sure. If there’s complete cloud cover, the observable effects of the phenomenon here on the surface of the planet will be diminished. If you’re planning to travel to the path of totality, check the forecast a day or two beforehand. And at worst, take it as a good reminder that there’s much in life beyond our control.

Do I have to know a lot about science or astronomy?

Scientists tout the unifying force of a solar eclipse. “For us to come together in the country, this is a really amazing chance to just open the public’s eyes to wonder, and get people to think about the most amazing natural phenomenon that can happen on the surface of the Earth,” said Angela DesJardin, the principal investigator of the Eclipse Ballooning Project and director of the Montana Space Grant Consortium, during a NASA press conference in June. “It gets people to wonder and think about what’s going on in the cosmos and come together in that very human way.”

Astrophysicist Angela Speck, a co-chair of the American Astronomical Society’s national solar eclipse task force, draws an analogy that folks in Athens should connect with.“I love encouraging people to be interested in pursuing science,” she said during the NASA conference. “One of the things that has happened in recent years is that scientists are seen as weirdos, and that we’re not normal, and that the public in general is not a fan of science. So I’d like to generate science fans. I like football, and I’m 5 feet 3 inches and pretty petite. I’m never going to play football, be it professional or amateur, but I appreciate the game and can be a fan. So I hope the event draws people from across the country to love science, even if it’s not something they practice.”

But this is going to happen again, right?

Well, sure. Earth can experience up to five solar eclipses a year. There will be total solar eclipses passing near Athens in the future, but not this close, and not for a while. The next one to hit Georgia will just barely clip the southwestern corner of the state on Aug. 12, 2047. And on March 30, 2052, a total eclipse will darken Georgia’s coast, passing directly over Savannah; book your Tybee Island beach house now, if you like. (Though with rising sea levels, who knows what’ll happen between now and then.) Those who manage to still be alive May 11, 2078 are in real luck. That’s when a total solar eclipse will pass directly over both Atlanta and Athens.

Oh. So, like… this is pretty much it? I should go?

Unless you can wait 61 years, or can travel to other parts of the country or world, yep. If you want to experience totality, you should make the hour-ish drive. Things will be—quite literally—astronomically spectacular.

But don’t be bummed if you’re here in Athens for the event, either. UGA professor Knox isn’t, and he’s never experienced a total eclipse. “I’m more interested in seeing how the event affects my community and where I am,” he says. After all, you’ll see Athens—quite literally—in a new light.

It’s not during the eclipse per se, but the Athens-Clarke County Library will host Family Eclipse Day Saturday, Aug. 19 from 10 a.m.–2 p.m., featuring crafts, storytelling and a screening of Ladyhawke, a 1985 Richard Donner fantasy film starring Matthew Broderick, Rutger Hauer and Michelle Pfeiffer in which a solar eclipse is a key plot point.

The largest Aug. 21 gathering in Athens will no doubt be at UGA, where Sanford Stadium will be opened up to eclipse-watchers from 1–4 p.m. Scientists from the schools of geography, crop and soil sciences and physics and astronomy will host a massive event featuring eclipse-related music, trivia, free giveaways, autographed items, and showing the total eclipse from across the country on screens. They’ll be passing out 10,000 pairs of ISO-rated safety glasses.

“This has been a dream of mine for a long time,” Knox says. “I’ve walked past Sanford Stadium for 15 years as a faculty member. It’s such a focal point for the college community, and to put on a science-related event there is a dream.”

Clarke County public schools will release 45 minutes late so that students can watch the eclipse. UGA has provided 17,000 pairs of glasses to local schools.

For those who want a beer while their mind is blown, Southern Brewing Co. has a 15-acre lawn and plenty of open sky. Bring blankets and chairs. Dogs and kids are welcome. Terrapin Beer Co. also has a big lawn away from the city lights, and its Blackout Bash will feature beer infused with Moon Pies and eclipse-themed music.

Other eclipse-watching spots include Athens City Hall, the Madison County Library, the Bogart Library and the State Botanical Garden. See the Calendar for more.

Further afield, Rabun County, in the North Georgia mountains, is hosting several parties across the county, including an Elvis impersonator at the Tiger Drive-In movie theater, a square dance and fish fry at Andy’s Trout Farm, a wine tasting at Stonewall Creek Vineyards and bluegrass at Tallulah Falls. For more information, visit explorerabun.com/solar-eclipse.

At the center of the path of totality is Southern Wesleyan University in Pickens County, SC, which will enjoy a full 2 minutes 37 seconds of totality. Gates at its track and field complex open at noon, and there will be food vendors, live entertainment, children’s activities and a presentation by 31-year NASA veteran Mike Evans. For more information, visit swu.edu/eclipse.