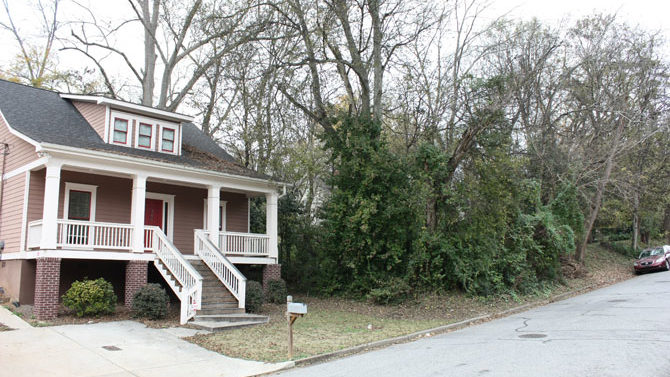 This is the second time within a year that Cobbham residents have feared for the character of their neighborhood.

Several months ago, it was the debate over whether Sigma Chi would be allowed to build a monstrous fraternity house on the corner of Meigs Street and North Milledge Avenue. Since the proposed house was too large and out of scale and character with the neighborhood, the Historic Preservation Commission (HPC) would not allow it to be built. (Yep, the same guys are moving into the Flagpole building soon.) 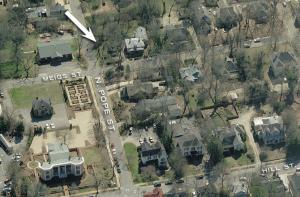 Elated though they were over the win against the fraternity, Cobbham residents now face with the prospect of another large house—this one on the corner of Meigs and Pope streets—clearly aimed at the student housing market coming into their historic neighborhood. Though comparison to the proposed fraternity house is somewhat unfair because this house will only be 1,580 square feet (a smaller footprint than some neighboring houses, though larger than others), it would be 33 feet tall, a good eight feet taller than surrounding houses.

Neighbors have raised issues like the house being set back too far from the street, with siding and windows that would not fit in the neighborhood. However, architect Brett Nave of Studio BNA said at an HPC meeting Wednesday, Nov. 20 that he and the developer, a company called GA Dawghouse Holdings, want the house to fit in with and be a part of the neighborhood. Nave agreed to make the changes planners recommended, except for lowering the height, which will be discussed at a later meeting. Cobbham resident June Ball said she was impressed with the architect’s willingness to make changes to house.

The biggest problem Cobbham residents have with the house is that it appears to be marketed to students. The proposed house will have five bedrooms and five bathrooms, and the developer has built many houses of this nature around town in the last 10 years or so that are rented to students. Cobbham resident Clint McCrory said this is the “first example in many years of infill student housing” in the Cobbham Historic District. Other Cobbham residents expressed similar concerns, as well as aesthetic concerns over the scale of the proposed design and parking constraints. With only two spaces located on the lot for parking and a likely need for spaces for five cars, at least three cars will park on the street on any given day.

With the architect agreeing to make aesthetic changes to fit into the neighborhood and please the neighbors, the real issue at hand is zoning. That part of the neighborhood is currently zoned RM-1 (mixed density residential), which basically means that both single and multi-family houses can be built in the area. The proposed house fits into that category, meaning that there’s no legal reason to keep the house out as long as the design is approved by the HPC, an appointed commission whose decisions are based on aesthetics, not purpose or use.  Historically, parts of Cobbham do have a history of being multi-family, as many houses were turned into duplexes after World War II.

The only way to keep housing of this nature out of the Cobbham Historic District would be to rezone it RS-8 (single family residential with 8,000 square-foot lots). The ACC Planning Department tried to do that in the late 1990s; however, there was opposition among Cobbham residents to the rezoning, according to Senior Planner Bruce Lonnee.  The part of Cobbham on the east side of Milledge Avenue is largely, though not exclusively, rental. Opposition to the proposed 1998 rezoning came from property owners who own rental properties there. At the time, no one guessed that keeping the zoning RM-1 would allow new student housing into the district.

The parcel of land at the corner of Pope and Meigs is one of the last empty lots in the district, meaning that in order for more student rental houses to be built, historic houses would have to be torn down. Demolishing historic structures is a whole other kettle of fish, though not impossible, as we have seen in Athens before. Demolition would require approval by the Historic Preservation Committee since Cobbham is a historic district.

For the time being, if it’s approved, this house will stand alone as the only one of its kind in the Cobbham district.