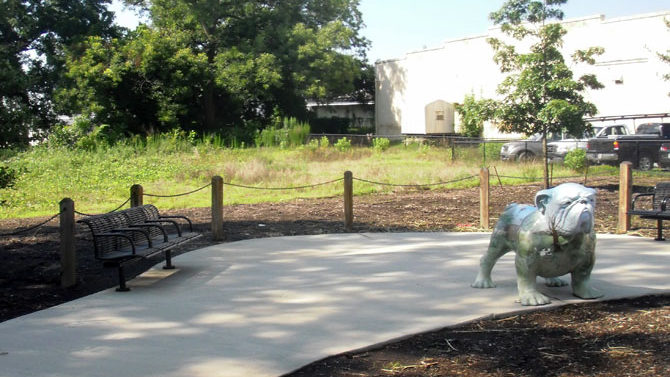 Unfortunately, we sometimes forget that Selig Enterprises’ plans for the former Armstrong & Dobbs property meet almost all Athens-Clarke County zoning ordinances, and we don’t have much input on the design process.  That said, Selig has revamped its plan several times and, while the plan is not perfect, it is getting better.

Tuesday, July 16, Selig met with the Greenway Commission and Rails to Trails Committee to present its preliminary plan for the connective space between its development and the Firefly Trail that will run along the old Georgia Railroad between East Broad Street and the Loop.

The presentation was complicated by the fact that the county engineers have yet to design this portion of the bike and pedestrian path.  In order to make the entrance from Firefly Trail to the new development more attractive and interesting, Selig is requesting an easement on a strip of government-owned land between their development and the trail.

The Mayor and Commission required Selig to present their plans to the Greenway Commission and the Rails to Trails Commission as part of a July 2 vote to approve a special use permit for the development. The plans for the proposed easement meet two requirements: that they include at least 10-feet-wide bike lanes and sidewalks, and those paths have no more than a 5 percent grade from Firefly trail to the development.

Selig could build the connection on its own property, but Senior Vice President Jo Ann Chitty said the company wants a visual connection from the development to the trail. The back of the development is the side that will be seen from Firefly Trail. In the center, Selig is proposing a lawn and a plaza.  They will be connected by a set of deep steps that run the 120-foot length of the lawn and plaza and can also be used as seating. The lawn can be used for recreation—bocce ball being a popular pick—and the plaza will be paved.

Brian Edwards, landscape architect for Selig, said the lawn and plaza were designed to sit at different elevations to respect the existing topography and to activate the space both visually and physically.

The overall design calls for commercial space on the ground floor of the buildings flanking the lawn and plaza, with much of the commercial space designated for restaurants with patios. Selig representatives said they want to create an attractive view for customers.  (The earlier decision to create 15 residential units on the ground floor only applies to the building facing Wilkerson Street.)

From the lower plaza, the terrain will gradually run down towards Firefly Trail at a 5 percent grade.  There will be two paths down to the trail: a longer curved path for bicycles featuring two 5-foot-wide bike lanes and a shorter path with steps for pedestrians. While Selig’s designs are far from complete, they do call for native plant species to soften the edges of the lawn, plaza, stairs and paths down to Firefly Trail.  Bike racks, benches and trash bins all part of the rails-to-trails plan and will be paid for with SPLOST funds.

Committee members also discussed what else could be done with the land where Selig is requesting the easement.  The idea of a theater or concert space was tossed around several times and seemed like a very popular idea. The use of the space will ultimately be up to the Athens-Clarke County government and not Selig Enterprises.  Beyond connecting their development to Firefly Trail, Selig will not have any input into what happens in this narrow corridor of land because they do not own it. It is government-owned land and Selig is only requesting an easement to build two trails.

Selig’s willingness to build a pathway to connect with Firefly Trail is a far cry from the original design that had a monolithic parking deck towering over the path.  While the design is still not where many people want it—committee members complained that it needs less student housing and parking, smaller proportions and more varied architecture—it is getting better and more in tune with what our community wants.

As voiced by many people, we are not Atlanta, and we don’t want a development that belongs in Atlanta. We want a development that belongs in Athens.  Although they disliked the development as a whole, members of the Rails to Trails Committee and the Greenway Commission thought the proposed path design by Selig was good enough for Athens and that it did not negatively affect the rail-trail.  The proposal will now go on to the Mayor and Commission for a vote Aug. 6.