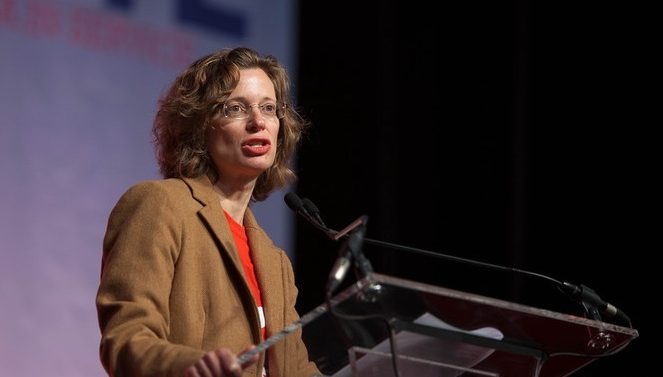 After better-known candidates like U.S. Rep. John Barrow (D-Athens Savannah Augusta) took a pass, Democrats may have finally found someone who has even an outside shot at taking Sen. Saxby Chambliss’ seat.

Michelle Nunn, 46, is a political novice who, until yesterday, ran the nonprofit Points of Light, which was inspired by Republican President George H.W. Bush’s call for community service. Her father is the legendary Democratic former U.S. Sen. Sam Nunn. Judging by this morning’s announcement, Michelle Nunn plans to run as a moderate like her daddy:

I have a family heritage that has taught me that there is no higher calling than service. I am a ninth-generation Georgian, the granddaughter of a farmer and Mayor of Perry and of a grandmother who took me to church on Sundays and taught me that we live out our faith by serving others.

I am also the daughter of U.S. Senator Sam Nunn and Colleen Nunn, who taught me the value of hard work. My father was an independent-minded statesman who accomplished an enormous amount by working with others to solve problems and keep our country safe. He’s someone I continue to learn from every day.

But the Washington that my father worked in not so long ago is a place that just doesn’t exist anymore. Instead of searching for common ground and working together to create solutions, too often our political leaders are simply trying to win the latest battle. Meanwhile, we are running up our national debt and failing to make tough choices to secure our economic future.

We need to face the fact that government cannot and should not do everything. Instead, we should cultivate self-sufficient families and strong communities.

We need to rein in our debt and grow our businesses to restore our economy and create jobs. We need to ensure that every child has the opportunity to reach her fullest potential and to contribute to our communities and nation.

She will face an unknown Atlanta doctor, Branko Radulovacki, in the Democratic primary.

“I’m glad that Ms. Nunn has jumped into this contest,” Radulovacki said in a statement. “Georgia deserves the chance to hear from many qualified candidates, and I expect that her entrance will draw even more voter attention.”

Nunn must be the favorite among Democrats, because at least one Republican, Handel, is already coming after her. Handel called Nunn “President Obama’s liberal, handpicked candidate” this morning.