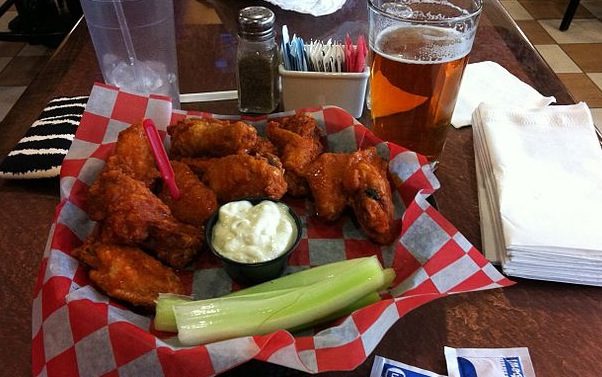 There’s quite a bit of news to get through here, so bear with me. You may have noticed that Rustica, occupying the former spot of Las Conchitas Caliente in Normaltown, shuttered a while back, and now some folks are working on the space again. But don’t confuse it with The Old Pal, the bar due to open in the former Jewels space next door. The new spot will be called Hi-Lo, and although I don’t yet know what kind of food it will have, it should continue serving drinks.

Junkyard Dawgs, a brand-new hot dog place at 1815 Commerce Rd., had its grand opening this past weekend. Open Tuesday through Saturday, it also does burgers and home fries.

July 29 is National Chicken Wing Day, a strange placement for a holiday not associated with the middle of summer. Regardless, the local Buffalo’s is holding an all-you-can-eat wings evening, with gratis fried chicken flappers for those whose last name contains the word “wing.”

Broad Street Coffee will, as is only logical, change its name with the move to larger quarters no longer on its eponymous drag. The new Echo will offer vegan food, a bar, Sunday brunch, music, tea and coffee, happy hour and art, and its owners hope to make the move in August.

Whitney Otawka, chef of the previous restaurant to occupy that space, Farm 255 (closed as of this past Friday), really does seem to be slated to head the kitchen at Hugh Acheson’s new Mexican restaurant in the ex-5 & 10 location, as Hugh confirmed to me on Friday. There’s no timeline on that yet, as he’s just a little busy at the moment, what with the move of his flagship restaurant (still undergoing tweaks, as with the shifting of tartine service to 10:30 a.m. from 10, and dealing with folks complaining about a lack of parking, which isn’t exactly new), the opening of his Italian restaurant Vittoria in Savannah and general musical chairs with his chefs.

The space on Broad downtown that was most recently Grilled Teriyaki is undergoing renovations to become something other than a sad place to get sushi late at night and will be a Puerto Rican restaurant called Little Bull.

Thom Leonard’s bakery in Five Points is getting really close, judging from the photos D.O.C. Unlimited, which is doing the interior work, has been posting on its Facebook timeline.