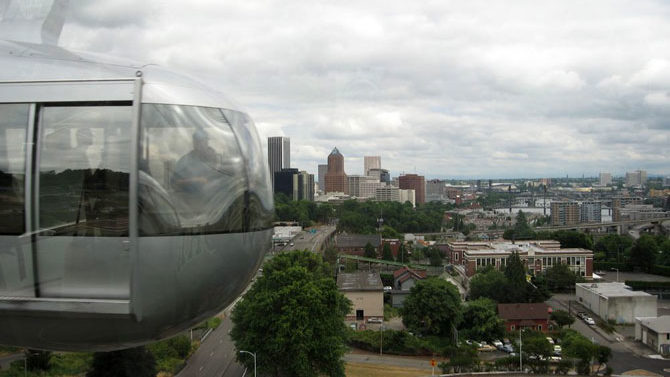 Ward Healing: Savannah has been highly regarded, more or less since its founding, for the elegance of its urban plan. However, itâ€™s a place that must truly be experienced to be understood and appreciated. Perhaps that lack of experience with truly successful models is one source of our local apathy regarding good planning. Visiting Savannah recently and experiencing it by foot, bike and car, it was incredible to see how this city has, over its nearly 300 years, evolved to handle all sorts of new challenges, and to integrate so many different kinds of uses and movement so seamlessly.

The key unit of Savannah is the ward, of which the square is the centerpoint. The relationship between space and architecture, nature and city, is rarely so well integrated in the American landscape, and while the squares were originally militia parade grounds, they have become green jewels. Indeed, the “garden city” identity of Savannah has always been there to some degree, with the original plan for the cityâ€™s larger area also setting aside neat agricultural plots for each ward.

The average ward measures out at a little over eight acres, with a square of around one acre in the middle. Itâ€™s certainly interesting to compare this flexible unit to similarly scaled projects here at home. The network of streets also performs quite well as an urban infrastructure, subtly providing on-street parking for around 200 cars per ward, not including those that park in the alleys. That the centuries-old Oglethorpe plan is capable of storing so many vehicles without creating any parking lots or overtly impacting the quality of the squares or buildings is a lesson modern planners and developers would do well to consider, as they attempt to solve current infrastructure issues with single-use solutions. Itâ€™s also remarkable that the contours of the grid mandate buildings that are well served by windows on all sides, keeping them well-lit and breezy, and putting more eyes on the street. Itâ€™s interesting to think that the average student apartment complex is similar to a Savannah ward in area, scale and square footage, and yet fails so horribly to produce an environment of any quality.

Ultimately, Savannahâ€™s plan is an egalitarian and nonhierarchical one, and that makes it eminently adaptable to other contexts, including ones like ours. Although we shouldnâ€™t necessarily stamp out wards in the same manner, the principles upon which those solutions are basedâ€”connectivity, self-contained neighborhoods and well-scaled streets and buildingsâ€”are ones that do apply. The scale of urban development relative to the street grid apparently hasnâ€™t changed in the last 300 years, and perhaps we could develop our own local module: a prescriptive approach that would steer development, whether medical offices or student apartment complexes or mixed-use supercenters, towards a more compatible and connected form.

A Transit Solution?: I recently caught Megabus to Atlanta, and itâ€™s interesting to consider, in light of so many debates about commuter rail and subsidized air travel to Atlanta, just what it means for regional transportation. This companyâ€™s growing network is based on a very minimalist approach, with direct routes, online booking and no-frills stops. It does fill a long-debated niche, namely affordable and quick transit service to Atlanta, at least for the occasional rider. I wonder how the service will evolve, though, and whether it will provide a viable alternative to the federally subsidized air service to Hartsfield from Athens, or to airport shuttles. Likewise, will the company be able to tap into a commuter market, serving daily travelers headed into Atlanta?

The practicality and ingenuity of transit solutions in other parts of the world with limited resources, especially South America, has always been fascinating to me. Countries on that continent have produced many innovative approaches, including the now commonplace bus rapid transit model, as well as more recent aerial tram and gondola lift systems, which are more familiar here as a ski resort feature than as a part of the urban transport system (Portland and Manhattan providing the only two American exceptions). I wonder: can we expect a more complex network of public and private transportation options in this post-recession era of high fuel costs and shrinking government budgets, especially given our stateâ€™s inability come up with any solution other than a sales tax to build more highways?

Megabusâ€™ American operations began in 2006, and given that the company has grown so much during the course of this recession, perhaps weâ€™ll be seeing other new business models for alternative transportation as the economy warms back up.