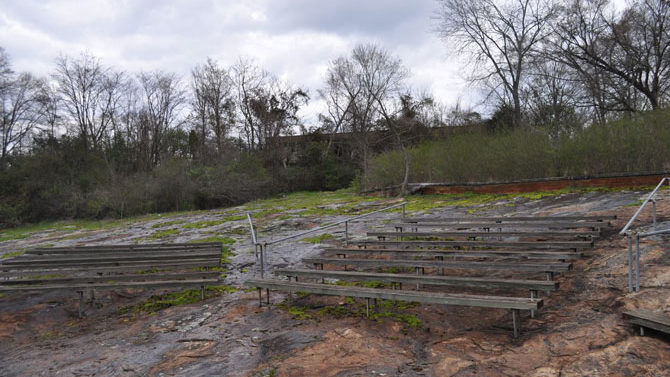 The Cedar Shoals, the large granite outcrop and shoals where Daniel Easley built his mill, and where legend has it he convinced the University founders to stop and build their school, will soon be dynamited away. This fascinating historical and ecological landscape will be destroyed to make way for stormwater ponds and parking lots, with five stories of student housing perched on top.

It doesnâ€™t have to be this way, though. Some other Piedmont towns have turned the very same kinds of outcrops into world-class amenities. Columbus is blowing out dams for a world-class kayak run through its downtown. Greenville has a bold, contemporary pedestrian bridge floating above its outcrop, creating an iconic focal point for that communityâ€™s redevelopment. 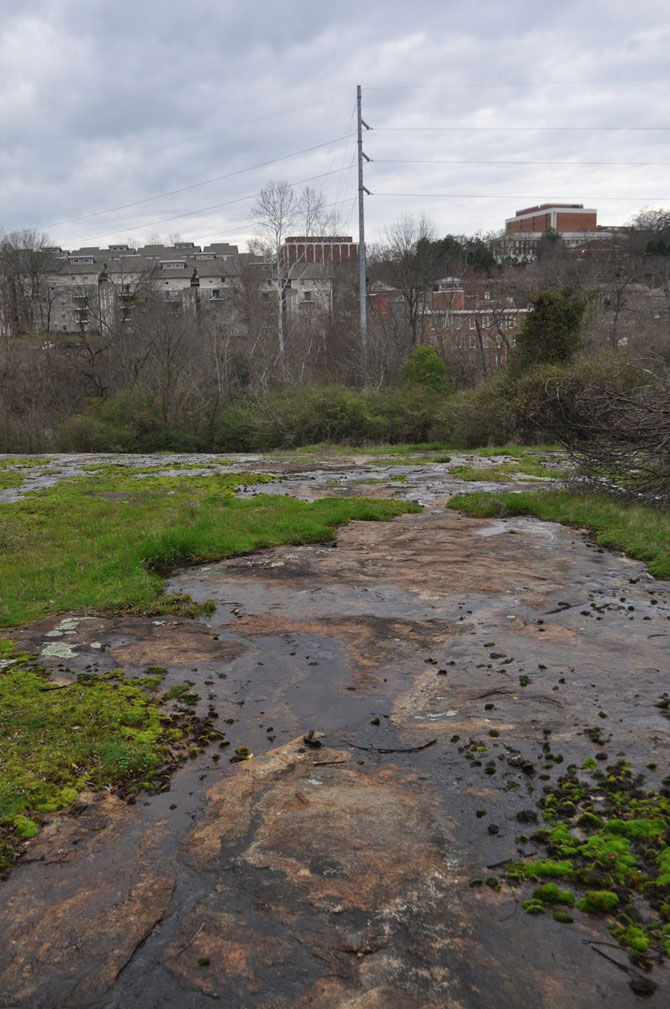 The Cedar Shoals outcrop looks out over the UGA and downtown Athens skylines.

Located on the former Boys and Girls Club property on Oconee Street, just across the North Oconee River from downtown, the Shoals outcrop could become a real gem for the community. Itâ€™s a stone’s throw from the Armstrong & Dobbs property, another key site, and another opportunity that will soon be missed.

In both these cases, the consensus seems to be that the development projects planned for them are generally the right kinds of uses for their locations, but the details and the design are off. Itâ€™s unlikely to happen, but I wonder about the possibilities if the developers of each of these projects, Selig in the case of Walmart and Vestcore in the case of the student housing, stopped for a moment and actually reached out to the community, attempting to incorporate Athenians into the design process in a sincere way. If someoneâ€™s goal is to make your project better, whatâ€™s the harm in actually considering the notion for a moment?

Seligâ€™s project has been in a holding pattern for months, with Walmartâ€™s hesitations as a rumored reason for the stalling; the Easley project has been held back for years due to the economy. Time to consider alternatives wouldnâ€™t cost much comparatively, but might net all sorts of creative alternatives to improve the projects in unforeseen ways. Maybe the Mayor and Commission could facilitate such a conversation, with the only prerequisite being that doing nothing is not an option, and we must find some way forward. Idealistic, perhaps, but what other choice do we have? Clearly, if Caterpillar is any indication, our government can mobilize quickly to put the incentives in place for the right project.
Itâ€™d be impressive to see that kind of urgency and enthusiasm for planning on the part of our government, with the need for a downtown master plan only formally recognized by the Mayor and Commission in the last month, despite years of platitudes about the need for such a document. The Greenway, it seems, is also in need of closer scrutiny, with a design overlay to regulate developments adjacent to it in ways that the zoning currently doesnâ€™t speak to. Besides Selig and the project on Oconee Street, there are also new apartments under construction off Martin Luther King, Jr. Parkway on the Greenway, and a large athletic complex adjacent to Cook’s Trail. Each of these is an opportunity to build a stronger community by creating a stronger relationship between public and private investment. How many of these opportunities will we miss due to a continued refusal to recognize that planning is a worthwhile investment?
What we saw with the Blue Heron river district project was that it is possible to link physical planning to economic development. Indeed, much of the broader attention to and enthusiasm for economic development here seems to have arisen out of that conversation. With the county’s newly appointed Economic Development Task Force working to develop a plan for growth and jobs, perhaps this place-driven strategy could be a part of the conversation.
To take but one promising example, if those members identify the medical field as what we need to focus on, â€œwhereâ€ and â€œhowâ€ also need to be addressed in their plan. These folks should get out in front, talk to people in the neighborhoods and figure out what kind of medical development is appropriate, and put that vision on paper for potential new businesses to see. The notion of creating an â€œombudsmanâ€ to shepherd projects through local permitting is a big buzzword among the economic development crowd, but perhaps the function of that role could be a bit broader. That kind of position should be about bridging between community and businessâ€”not just facilitating permitting, but facilitating meaningful relationships among businesses and the neighbors theyâ€™re moving in next to.