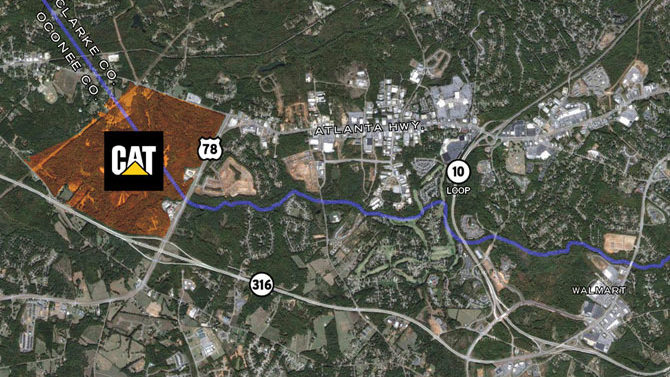 With the news that Caterpillar will build a factory here, bringing 1,400 direct jobs and an estimated 2,800 more throughout the region for a network of two dozen or so suppliers, the conversation about growth in Athens has changed significantly. The arguments so long made about why things like this canâ€™t happen here have been turned on their heads.

Some local leaders have continually made claims that Athens-Clarke County is â€œbusiness-unfriendlyâ€â€”that development regulation here is too tough. Mayor Nancy Denson even campaigned on the issue by talking about onerous zoning requirements, like those for bike racks, as a hindrance to economic development. Those regulations seem not to have deterred Caterpillar, though. Our undereducated workforce has also been frequently cited as preventing us from attracting high-quality jobs; the lack of an interstate highway has been noted equally often. A recent study of Athensâ€™ economic development efforts, conducted by the Janus consulting firm and funded by Georgia Power, summarized many of these claims.

And yet, here is Caterpillar. According to company VP Mary Bell, quoted in the Athens Banner-Herald, Athens was selected for, among other reasons, â€œa positive and pro-active business climate and a good pool of potential employees with manufacturing experience.â€ Hasnâ€™t she read the Janus report?

Likewise, â€œquality of lifeâ€ has taken on a pejorative connotation, with some questioning the role it has to play in serious economic development. Quality of life has been set up in a false dichotomy with economic growth, and there have been suggestions that there must be balance between the two. The battle over Seligâ€™s Walmart proposal bears this out, with the implication that those protesting the development for its potential negative impacts on Athensâ€™ livability are out of touch and anti-business.

Apparently, though, Athens’ unique character was a big factor in Caterpillar’s choice. In an email to constituents, ACC Commissioner Andy Herod noted this, writing â€œI can tell you that in our discussions with the company the thing that they kept coming back to was the great quality of life they can expect here in our community for their senior executives and managers who will be working at the plant.â€ Commissioner Mike Hamby seconded the notion, saying â€œThe quality of life we have here was a big part in making this happen.” A county press release announcing the project also echoed the sentiment.

The way Oconee County, ACC and the state came together to make the deal happen so quickly also seems to run counter to previous characterizations of this communityâ€™s relationships with its neighbors. Hamby noted that the collaboration with Oconee â€œwent off very smoothly.â€ How does this line up with previous attempts at regional collaboration on economic development?

Caterpillar is a game-changer for Athens and the region economically, no doubt. But what does it say about our efforts to date, given how far off the local discourse about economic development seems to have been from the actualities of bringing a major employer to the community?

Perhaps now is the time to start talking about economic development with a clean slate. Our preconceptions about our own strengths and weaknesses donâ€™t seem to hold, and members of a newly formed economic development task force might do well to steer clear of the conventional wisdom. If we abandon our previous baggage and start framing the issue with our newly acquired assets, not only locally but in surrounding counties, things start to look quite a bit different:

Athens, GA is Americaâ€™s quintessential college town, home to one of the Southâ€™s premier universities. That university includes a medical school which, along with two hospitals, forms the heart of a burgeoning health sciences industry. Throughout the region are a number of manufacturing operations, most notably including a major Caterpillar plant, which serve as proving grounds for graduates of the University of Georgiaâ€™s new undergraduate and graduate engineering programs, and students from a highly regarded local technical college. Athens has a terrific local airport, is well-served by rail, and is at the crossroads of a network of federal and state highways that provide quick access to the worldâ€™s largest passenger airport in Atlanta and the nationâ€™s fourth-largest port in Savannah. The local school system has undergone a rapid transformation, renovating all of its facilities and developing innovative new partnerships, such as those with the universityâ€™s education college and the local nonprofit Whatever It Takes, while significantly increasing graduation rates. Athens has accomplished all of this while diligently protecting its natural resources, cultivating an international reputation for music and the arts and retaining an excellent balance between classic and quirky, small-town and big-city, country and rock and roll.

This is our story, and we need to begin the next chapter of our communityâ€™s evolution on this sort of positive note. Of course, there is still work to be done. The economic downturn has turned many discourses in a pessimistic direction, and that has divided the town, particularly in regard to the Selig development in downtown Athens. Any job is a good job, some have claimed, and that justifies risking the things that others now claim were such a major asset in attracting Caterpillar to Athens.

Iâ€™d argue that, while compromising our standards and our identity may be unfriendly to one type of business, holding on to our priorities is apparently attractive to another kind of business. That kind of business is apparently a more desirable one anyway, though, paying salaries not just barely above minimum wage, but above the communityâ€™s median income, and providing an order of magnitude more of them. Weâ€™ve got to move away from an adversarial relationship between business and community interests and toward a mutually reinforcing one. Hopefully, the economic development task forceâ€™s members will move beyond the board room in which they meet, and make a serious attempt to understand what it is about Athens that is so infectious to so many, and how we can craft a strategy that not only acknowledges that, but grows organically from it.

Athens has been needing a win for a long time now, and it looks like we’ve hit the jackpot. However, we mustnâ€™t consider our work done. We still have alarming intergenerational poverty in this community, and we are in many ways deeply divided. Letâ€™s take this moment as a chance to really understand why those adversarial relationships exist, and attempt to overcome them. Athens is a place like nowhere else, and if we can start crafting a newer, more inclusive narrative for our community and sharing it with the world, perhaps Caterpillar will represent the first of many bright moments in our future.