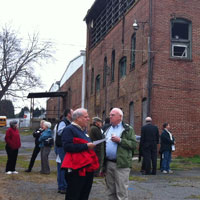 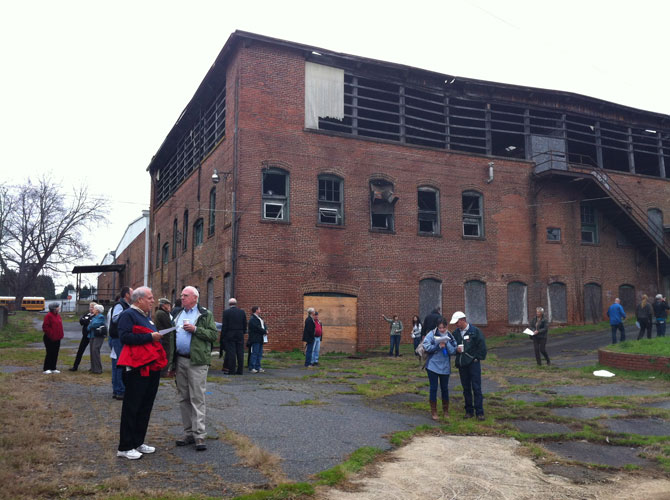 Interested community members and stakeholders came together to explore the Southern Mill, physically and intellectually. Could such a collaboration be applies to other development conversations?

The Athens-Clarke Heritage Foundation held a one-day symposium with around 150 attendees Feb. 4, using the historic Southern Mills as a focal point around which to frame a broader conversation about how historic preservation and notions of sustainability intersect. The four speakers who presented, although they were mainly discussing their work elsewhere, did talk about the potentials of Athens and the Southern Mill more specifically. However, I couldnâ€™t help but consider how their ideas apply to another ongoing historic preservation issue: the Selig plan for Armstrong & Dobbs, which involves demolition of three National Register historic structures. Selig’s proposal and the methods proffered at the symposium represent fundamentally different ways that business can be done, and the concepts that the speakers presented outline just how much we all stand to gain by building broader coalitions for revitalization.

This public educational event focused on Southern Mills was also intended to help market the property, and the current owners, Aderhold Properties of Atlanta, were in attendance, along with local elected officials, a rumored potential buyer or two, and various other community stakeholders. The event, conducted with no preconceptions about what the site should become, was a great way to get everyone thinking. It will be followed up on the weekend of Feb. 24â€“26 with a charrette, conducted by UGAâ€™s Center for Community Design and Preservation. That stands in marked contrast with Seligâ€™s aggressive rollout of its plan, and conflicting statements about whether or not it is interested in working with the community to execute its project.

The first speaker, Donovan Rypkema of Washington, D.C.-based Place Economics, started off the presentations with a powerful set of criteria for what should constitute sustainable economic development. These criteria, backed by his firmâ€™s work and research, laid out a model for economic development driven by local assets and identity, long-term thinking and a commitment to small local businesses. He could think of â€œnot one downtown revitalization project that didnâ€™t include historic preservation.â€ Is Seligâ€™s project exceptional enough to be the first? Unlikely.

Rypkema also noted that since the recession began, large corporations have continued to shed jobs, and the recovery in employment has been due almost exclusively to hiring by small businesses. Likewise, historic districts he studied had a rate of foreclosure less than half the average of the cities in which they were located.

Another important point raised was the environmental cost of demolition and new construction as opposed to reuse. While Selig has already made claims of building to â€œgreenâ€ standards, it often takes decades for green buildings to offset the energy used in their own construction, and even longer when you factor in demolition. If Selig were actually concerned about the environment, rather than using those claims as marketing, preservation would be the way to go.

Tom Liebel, an architect with Marks, Thomas Architects of Baltimore, discussed his understanding of sustainability and preservation, focusing on the Milllerâ€™s Court renovation he worked on. He explained how the preservation of that former industrial structure for a nonprofit hub and teachersâ€™ apartments spurred the revitalization of a rough neighborhood, and became a landmark for the area. â€œRather than create a simulacrum of Main Street,â€ he asked, â€œwhy not rehabilitate Main Street?â€ He also talked about the collaborative process he engaged in with future occupants of the building, noting that â€œThe community needs to help dictate the design solutions in the case of Southern Mills.â€ That strategy for success should be applied to all projects.

Andrew Ham of Urban Trust, LLC discussed financing strategies for mill renovations, noting the types of incentives and tax credits available for developers who choose to do preservation work. Many of the case studies he presented resulted in half the projectâ€™s costs being offset by the use of preservation tax credits. That ability to leverage capital from outside the community is an exciting one, and the potential to create new space at effectively half-price puts historic preservation in a particularly empowering light in terms of self-determined community revitalization. Could historic preservation be the bootstraps by which Athens can pull itself up?

Myrick Howard, president of Preservation North Carolina, presented a series of incredible mill revitalization case studies, demonstrating how communities large and small can turn blights into assets. His bold organization has a well-deserved reputation as one of the best preservation entities in the country. Particularly interesting was the group’s ability to renovate not just mills, but entire mill villages, catalyzing whole neighborhoods and towns. That outward awareness and attention only seems to have made those projects more successful, with many of the residential loft conversions he shared having sold out before construction began.

The ideas laid out at the ACHF event are powerful ones, and as the conversation about Southern Mills continues, perhaps it will become a model of how to conduct development and revitalization differently in Athens. Perhaps it will set the kind of precedent others will want to follow.