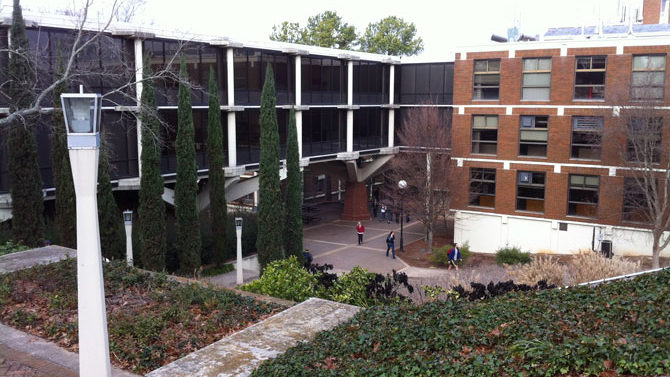 Southward, Ho!: I spent my undergrad years on North Campus and rarely travelled south of Tanyard Creek. Circling back for grad school, Iâ€™ll be spending the next chapter of my academic life on Ag Hill. Settling into a routine in this seemingly dated portion of the nationâ€™s oldest public university, Iâ€™ve started to appreciate the vision of the place. Subtle details, like the hyperbolic lamp posts lining those stretches of Sanford and Cedar Streets, contribute to the aspirational glow of the district, with pure geometries drawn from science as the drivers of form, rather than historical tradition. The character of this portion of campus, as well as other, more far-flung buildings of the era, is a forward-looking one, even if it hasnâ€™t aged as well as it could. While the often utilitarian buildings have plenty of flaws, it is worth pondering what they symbolize at their best.

Not a Total Disaster: The cluster of scientific buildings ringing Ag Hill, affectionately known as “the train wreck” by some, is a Modernist Acropolis, an echo of the same impulse which defines North Campus. They are a fascinating composition, from an era when public confidence in rational science and its role in society was high: the mid-20th century was a time of splitting the atom and putting men on the moon. Buildings like the Stegeman Coliseum channel a similar daring. While Greek Revival architecture calls up general feelings of historicity, the scientists of South Campus are a different sort of heir to Greek tradition.

The â€œtrain wreckâ€ forms quads, plazas and geometrical groves of trees, abstractions of the older campusâ€™ forms. The structures of the science complex are aligned perfectly north and south, and beyond any cosmological associations, these future-thinking structures anticipate many of the features that have become commonplace in contemporary sustainable architecture. For instance, many of the south faces of these buildings feature the sorts of solar shades that are found on newer sustainable structures like the Lamar Dodd School of Art and the new Pharmacy Building, both of which are candidates for LEED certification. A small green roof atop the Geography-Geology Building was decades ahead of the more recent ones installed on campus. Looking back, itâ€™s easy to find flaws, but some initial steps were made back then in which we are now walking.

Branching Out: Iâ€™ve travelled down to Sapelo Island a couple of times, the setting of an as-yet unwritten horror flick. Accessible only by ferry, the island is primarily home to the small township of Hog Hammock and the UGA Marine Institute, on the former plantation of tobacco magnate R.J. Reynolds. Scattered around the rest of the island are an old airstrip, Native-American shell rings, an old church standing among forest fire-singed palms and a Victorian greenhouse, in need of repair. The research station, once a thriving community of scientists and grad students, is a somewhat desolate shadow of its former self, a long-forgotten outpost of a state scientific order which has Ag Hill as its capital.

Futures Past: Urban legends surrounding the circa-1950s Georgia Center, just down Sanford from the science complex, flesh out the Modernist microcosm. With its United Nations-inspired bicameral auditoria, the convention center is rumored to have been designed to function as an emergency seat of government for the state of Georgia, should the communists have laid waste to Atlanta.

A master plan from the era calls for all sorts of futuristic features, like an elevated railway looping through campus in a figure-8, and residential towers studded in greenspace. The high-rise dorms, divisive as they are, were only a first phase. While their model has been disproven time and time again as a solution to urban planning issues, it does function well enough in a campus setting.

The Real Tomorrow: Ultimately, itâ€™s a good thing that the vision was never carried out fully. It was based on a theory for how the world could work, now disproven. The ideas embodied in those buildings are a half-century out of date, and â€œmodernâ€ has come to refer to the past. Questions are starting to come up: do we fix these places here and there, renovate them fully, or take it all down and start over?

The Coliseum has been wonderfully reworked, as has the Journalism Building, with its new wall of new north-facing windows. The old Lamar Dodd is getting fixed up now, too. Rather than being static monuments, perhaps the truest test of these buildings will be how well they will evolve and adapt. Based as they are on the simplest geometric forms, the success of these structuresâ€™ rigorous designs will be determined by whether the simple building blocks can host as-yet undreamed futures.