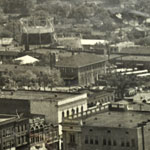 Classic Center staff and board members have been trotting out arguments about a decades-old plan for the convention center in support of fast-tracking the upcoming phase of the convention hallâ€™s growth, at the expense of public input and oversight. In the interest of gathering public input at a Jan. 6 public input session, they gave out handouts with a three-page history of the process (compare that to the half-page slip given to citizens for their commentsâ€¦ Equal time? I think not). As long as weâ€™re digging through the archives, letâ€™s take a look at a few other gems that didnâ€™t make it onto the Classic Centerâ€™s glossy timeline. 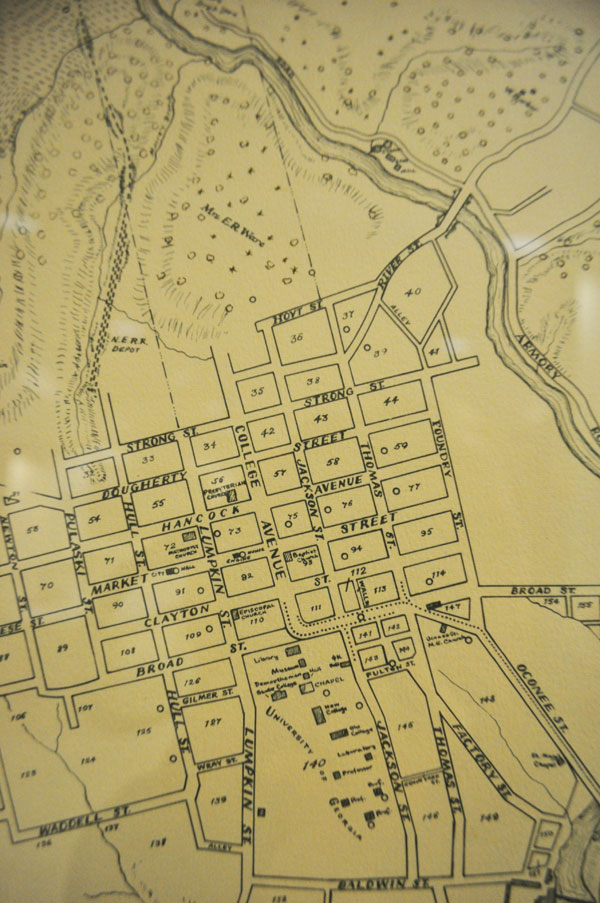 We’ve already cut out plenty of the historic downtown grid–every remaining connection increases the value of the whole.

The eighties! That wondrous era of long ago that is now relived in the form of themed parties and bad downtown planning. No, not that one that called for turning Clayton Street into an enclosed mall; the other oneâ€¦ the one for the Classic Center thatâ€™s recently been dredged up as an argument for curtailing public scrutiny of its proposed expansion. The eighties were good times, when Soviet teenagers beyond the Iron Curtain listened to the CIAâ€™s Radio Free Europe while American youths listened to REMâ€™s “Radio Free Europe,” rereleased on new technology called the compact disc. Notable events in the Classic Centerâ€™s history from that era? A lawsuit, for violation of open records, related to the hiring of the facilityâ€™s designers:

Suit by the Athens Banner Herald and Athens Daily News to enjoin closed sessions of the Classic Center Authority to discuss and deliberate upon the employment of architectural firms for the Athens Civic Center.

Held that the entire meeting should have been open both (1) because architectural firms are not “employees” within the meaning of the Open Meetings Act personnel exception and (2) because the action of the Authority in reducing the number of firms under consideration from six to three was tantamount to a vote regardless of what other label may be attempted to be attached and votes are not excluded by the personnel exception.â€

Then there were the nineties, when we burned up a million dollars because the uncompromising Polshek design team refused to consider a Classic Center that didnâ€™t involve demolishing the historic Fire Hall. Frustrations in the community rose to a level that only those hearing â€œSmells Like Teen Spiritâ€ for the first time could otherwise muster. 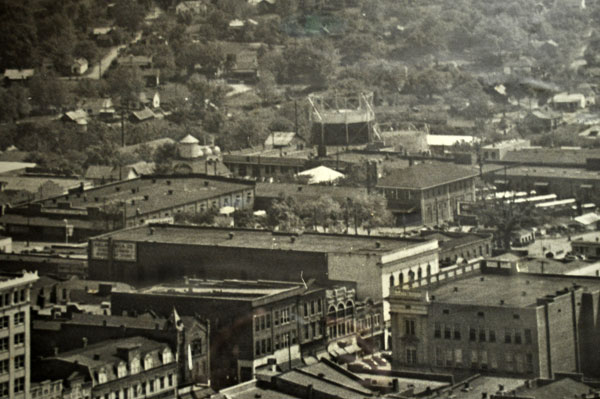 The structure just to the right of the center of this historic photo is the Fire Hall, now surrounded by the Classic Center.

Athensâ€™ then-CEO Gwen Oâ€™Looney(no relationship to current Classic Center Authority President Gwen Oâ€™Looney) put it best with this quote to the Athens Banner-Herald, circa 1994: “I’m really sick of the civic center,” she said. ”Blame can be put at every stage. Probably way down the road, somebody will appreciate it, but we will never see it.” Nowadays sheâ€™s touting the consistent transparency of the organization since its beginnings.

Finally we arrive at the most recent decade, the 2000s, when local hoteliers got bent out of shape because the Classic Center decided to spend a quarter million dollars strengthening its parking deck to accommodate a hotel on top. If only they had known that this hotel was part of the plan all along. This was their intention since the beginning, and it was made manifest in such actions as… strengthening an existing parking deck to accommodate putting an initially-unplanned-for hotel on top. A 2002 article in the ABH cites a letter from the Athens Area Hotel Association: ‘We were surprised and disappointed to learn that at least $239,000 of public funds has already been submitted by the Classic Center Authority and approved by the commission to build hotel infrastructure.” Didnâ€™t they get that the Classic Center had their best interests at heart?

The decade wrapped up with a bang last fall, when Paul Cramer (no relationship to the Classic Center Executive Director) answered a question from City Dope Dave Marr at an Athens Federation of Neighborhoods forum on the SPLOST 2011 referendum, specifically asking whether approving SPLOST 2011 meant the closure of Hancock. Cramer answered by assuring the group of citizens gathered at Fire Hall No. 2 that it did not. That certainly contradicts the request for proposals the Classic Center put out last Nov. 15, which states that no firmâ€™s proposal will be considered which doesnâ€™t meet the criteria of the RFP, among them that Hancockâ€™s closure is assumed.

Look: either the Classic Centerâ€™s design decisions are the result of a long-term Master Plan, or they arenâ€™t. They canâ€™t have it both ways, though. If they are operating off a plan which has called for the closure of Hancock all along, they certainly canâ€™t fill in the Washington Street courtyard, being that that space was clearly designed and intended to remain open, and that design intent was to be reinforced with another matching courtyard across the street at a later date (some early Greenway documents even point to that courtyard as a great pedestrian connection). If they are instead opportunistically seizing on opportunities as they come, it would certainly explain why the hotel/parking deck story unfolded the way it did.

The decision to let the majority of this process unfold over the holiday season, roughly from Thanksgiving break to New Years is pretty sketchy. With the holidays at the forefront of peopleâ€™s minds over the last few weeks, this project has slid through with a lot less scrutiny than it might have received had the process begun a couple months before or after. Treating the design of this expansion (especially the closure of Hancock) as a fixed element in the Classic Centerâ€™s RFP, which came due December 21, is pretty strange, too. Equally strange are the incredibly detailed floorplans included in the RFP. For an authority that hasnâ€™t hired an architect, they sure do seem to have quite a number of blueprints on hand.

A Classic Center staffer assured me at the Jan. 6 meeting that these were not architectural drawings, just an illustration of the shape, location, and placement of buildings. He couldnâ€™t recall the particular title of the firm that made the drawings, but they were certainly not architects! Quibbling over the definition of architecture may be an important philosophical exercise across Broad Street at UGA, but itâ€™s certainly not funny here. It calls to mind a certain aforementioned incident in the 1980s, when the Classic Center couldnâ€™t differentiate between a paid employee and a hired consultant, using the technicality to violate open meetings laws.

Maybe what Cramerâ€™s assurances meant when he said the design wasnâ€™t finalized was that heâ€™d like public input on whether to paint the walls of the hallway heâ€™s subbing in for an urban thoroughfare in taupe or beige. Had the Classic Centerâ€™s record been better over the years, I might be willing to let these pretty messy oversights slide, but as it stands, I canâ€™t help but wonder if thereâ€™s a systematic callousness with regard to the publicâ€™s concerns. The reality is that this public input forum gave no real chance for such a thing, with the caveat at the bottom of those half-page slips that they would be â€œsummarizedâ€ before being passed on to the mayor and commission. Indeed, the whole session was simply PR for the Classic Center, another chance to â€œsellâ€ their plans, rather than a meaningful chance to have a dialogue and find the best solutions. Nothing about the meeting suggested the publicâ€™s ideas were on equal footing with those of the Classic Center, its staffers, or the studies of consultants it hired.

What we really ought to be talking about, though, is how to move forward. No one wants to see the Classic Center fail; indeed, the so called â€œopponentsâ€ of this expansion generally support it in principle but question the short-sighted and outdated approach. The important issues at stake are how this project fits into broader goals for the community. The Economic Development Foundation folks behind Project Blue Heron (that Riverfront Economic Development Zone that would create all those jobs) have said the Classic Centerâ€™s cutting of several potential access points wonâ€™t preclude their proposal, which is a smart thing for them to say, but it sure as hell wonâ€™t help, either. Or letâ€™s take the Multi-modal Transportation Center, for instance, something weâ€™ve already sunk a few million dollars into. That transportation hub, placed where it was, will be pretty well cut off from downtown by this, with a narrow chink in this Great Wall as a token gesture towards access. Donâ€™t the folks using public transit deserve to be well integrated into the city, rather than hidden away behind the parking decks and loading zones of a monolithic convention center?

If commuter rail will one day come to Athens, along with high-tech firms relocating here to the River District, then Foundry Street is not the Classic Centerâ€™s back alley; itâ€™s Athensâ€™ front door. We need a plan for downtown and the Classic Center that recognizes these 21st-century opportunities, rather than dredging up antiquated arguments about why the process can only unfold one way.

All hope is not lost, though. Our elected leaders (as opposed to the ones who seem to really be running the show) seem to get it. This from Commissioner Mike Hamby: â€œI get the sense of the majority of the commission wants to slow down. We want the right design.â€ So breathe a little easier, catch your breath, and next week, weâ€™ll explore what that means, and what truly proactive planning could look like in this town, and how the Classic Center’s planning process could be the first chance to get it right.