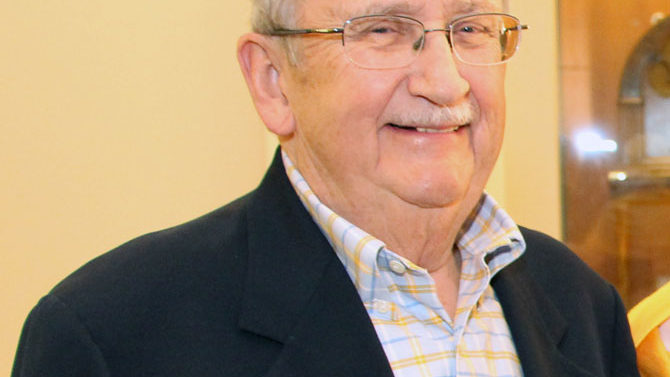 Wallace B. “Wally” Eberhard was an exemplar of old-school journalism. As a former journalist himself, he taught a generation of Georgia journalism students the fundamentals of reporting and editing, professional ethics, press law and media history.

Originally from Michigan, Prof. Eberhard spent his academic career at Grady College of Journalism and Mass Communication, teaching full time from 1970–2000 and then teaching First-Year Odyssey seminars through last year. After a recent short illness, he died on Oct. 7, his 87th birthday.

My friendship with Eberhard began in 1968, when we were doctoral students at the University of Wisconsin in Madison. Later, as colleagues at UGA, we collaborated easily—serving on faculty screening committees of the Peabody Awards and organizing a Reader’s Digest writing workshop for the region’s freelance journalists.

Despite having opposite political affiliations, our friendship “across the aisle” endured a half century because, while we differed and disagreed, we never argued or got angry. That’s pretty old-school, too.

Eberhard was an old-fashioned wag, ornery, yet not vulgar or mean-spirited. He used language playfully. He congratulated folks with “attaboy” or “attagirl.”  He dubbed press releases, the bane of journalists, as “sludge.” He chided an obnoxious dean as “Mr. Potato Head.” He used expressions like “harrumph” and sweetly called his beloved wife “my bride.” His wry sense of humor was often self-deprecating. Once he told me cryptically: “I’m getting an iron infusion for my anemia tomorrow. Keep magnets away from me for one week!”

It was our brotherly tradition to have lunch on the day between our early October birthdays. His favorite spot was Weaver D’s Soul Food, which he said served “good back-to-our-roots fare.” We also had a tradition of goofy pranks—each often sending the other unused tickets to events long past. Last fall, when I told him I was going to Venice to the Biennale, he mailed me 13,000 Italian lira for lunch on him, knowing full well that the lira was no longer a negotiable currency.

Eberhard was patriotic, but not demonstrative about it. As an officer in the Army reserves, he routinely went on active duty for a couple of weeks during summers. After one stint at what he tagged Camp Swampy, he said he decided to turn in his issued weapon because it was dangerous and he simply didn’t want it around the house any more.

He personified decency, was steady, reliable and resilient. He had common sense affiliated with Midwesterners. After taking a major professional hit from an irate dean years ago, he quietly soldiered on. That’s when I realized that his two great sources of strength were his family and his faith.

Eberhard’s journalistic ethos continued to inform his retirement years. He was an advocate for sunshine laws for open meetings and public disclosure of information that citizens needed to know to make informed decisions when voting. He sought transparency in government’s handling of public funds, and he was a model citizen in action, serving on the local library board for 20 years. He extolled libraries because they were public facilities welcoming everyone, free of charge and wholly democratic.

Like most reporters, he was an eternal skeptic and continually questioning. He admitted that Bob Dylan wrote fine songs, but did he really deserve the Nobel Prize for Literature? He also wondered if rebranding an already well-known journalism school wasn’t the end of the world as we knew it.

During a recent lunch, Eberhard and I discussed the current attacks on the press. Later that day he wrote this indelible statement: “The press may be threatened, but it always has been—quite rightfully—criticized. Imperfect though it may be, without a free press there is no working democracy. Getting the public to understand and agree with that is an ongoing challenge.”

After news of Eberhard’s death spread, a UGA alumnus who had a distinguished career as a reporter for the Atlanta Constitution offered this simple honorific for him: “He taught me a lot.” I feel exactly the same way.

John English, Professor Emeritus in UGA’s Grady College of Journalism and Mass Communication, delivered a longer version of these remarks at a memorial service for Wally Eberhard at Emmanuel Episcopal Church Friday, Oct. 19.