Thoughts From a Recent Trip to Tulsa’s Woody Guthrie Center 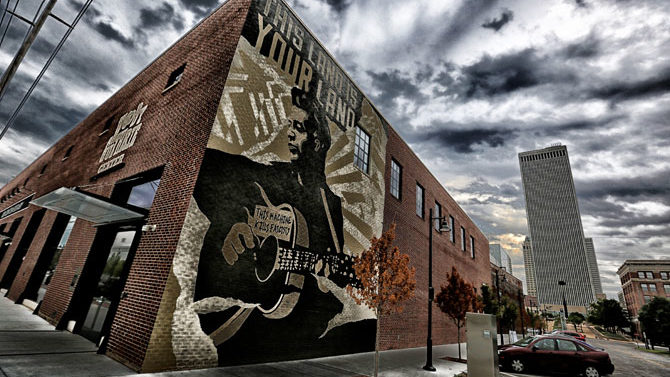 No Okie would deny that Woodrow Wilson “Woody” Guthrie (1912-1967) was the most popular folksinger and most influential songwriter of the mid-20th Century. Yet Guthrie was equally well known as a radical patriot and American socialist. Even though he was born in rural Oklahoma and grew up during the Dust Bowl era, Guthrie spent much of his adult life in New York City, while also being a true “rambling man.” In the 1950s and early ‘60s, when I was growing up in Tulsa, Guthrie was then considered a pariah and “communist,” the worst Cold War epithet one could utter.

So I was completely flummoxed to discover that the Woody Guthrie Center had opened in 2013 in downtown Tulsa to honor the legacy of this native son. Since I know that Oklahoma is still an ultra-conservative state in today’s political landscape, I was more than a little curious about this unexpected turn of events. So, I decided to go there to see for myself.

The Woody Guthrie Center is located just north of central city in what’s now called the Brady Arts District, at 102 E. Brady St. The area hosts the venerable Brady Theatre, a grand vaudeville house where I first heard performers such as Chuck Berry and LaVern Baker in concert. Nearby is the old Frisco Railroad Union Depot, which now houses the Oklahoma Jazz Hall of Fame. Among its list of impressive inductees are Chet Baker, Earl Bostic, Don Cherry and Dizzy Gillespie, plus scores of others. Also nearby is Cain’s Ballroom, the historic music and dance hall that has been hosting for 90 years such diverse musical acts as Bob Lee Wills and the Texas Playboys, the Sex Pistols, Widespread Panic and locals known for creating the Tulsa sound—a motley brew of country, rock, rockabilly and blues.

The Brady district was originally a warehouse zone, given its proximity to the rail lines. Its gentrification began a decade ago, and its 20 blocks now accommodate an eclectic array of bars/clubs, restaurants, offbeat retail shops, a spiffy new hotel and even trendy food trucks. Given its emerging hipness, the district’s namesake became problematic when it was discovered that this rich, local businessman, William, was also a notorious member of the local Ku Klux Klan. So, the city recently changed the street signs to read M.B. Brady, an apparent link to the New York photographer of the Civil War era, Matthew, who had no known ties to Oklahoma. An odd, implausible and transparent “fix,” in my mind.

That name alteration obviously had something to do with the adjoining neighborhood called Greenwood, the city’s major African American community. Note: Oklahoma’s minority population is more often Native American (9 percent) than African American (7 percent) or Mexican (7 percent). Yet, race relations in Tulsa have been uneasy since a 1921 race riot, when whites burned Greenwood to the ground and left 26 blacks and 13 whites dead. A nearby house museum recently named for native son John Hope Franklin, a prominent African American attorney, documents that blight on the city’s history and is worth a visit.

The Guthrie Center is located in an old warehouse that was renovated with funds from the George Kaiser Family Foundation, to a generous tune of $36 million. George Kaiser is a local billionaire, who went to Central High School downtown and then on to Harvard, eventually taking over the family oil company and later making a fortune in banking. Kaiser is not only a progressive committed to social change, he has also devoted half his wealth to philanthropy, in the Giving Pledge tradition of Bill Gates and Warren Buffett (who, coincidentally, now owns the Tulsa daily newspaper).

The creation of the center became reality after the Kaiser Foundation purchased the Guthrie archives—some 10,000 pages of Woody’s personal papers,  songwriting notebooks, novels, articles, artwork and other artifacts—from the Woody Guthrie Foundation, run by his daughter, Nora. That mother lode of  history was transported from Mt. Kisco, NY to Tulsa and has been available for researchers to mine since the center opened in April 2013.

Deana McCloud, a former Tulsa school teacher who is now executive director of the center, outlines its mission: “It preserves his life story and legacy. It’s a repository for his writings and songs and an education center. It also communicates the social, political and cultural values found in his vast body of work.”

Even though the center has state-of-the-art exhibits on his songs, artwork and books, McCloud says it’s more than a museum:  “We want researchers to explore the arts and to promote social justice. We have also developed extensive outreach and education programs. And, we run a concert series to bring Woody’s legacy to fans worldwide; we want people to know how he changed the world and inspire others to do the same.”

If Woody Guthrie were alive today, he would have been part of the Occupy Movement.

Inspiration is an important goal, McCloud continues. “We tell young people that they have potential, to take pride in themselves and their work and to take positive steps to make change, to reverse the cycle of poverty and hopelessness.”

“Woody’s best known song, ‘This Land is Your Land,’ is more than a song; it’s a theme, a way of life. It’s for everyone,” she says. “We want to help people who feel helpless and give voice to those who don’t have one.”

McCloud has developed K-12 lesson plans for schoolteachers, which align with current teaching standards. “We tie in with early Oklahoma history. We’re not out to promote an agenda, but Woody made something of himself, and we want to help others do the same. We don’t avoid Woody’s politics—as you know, he wasn’t a conservative Republican. We don’t want to alienate anyone, yet we are also an oasis of acceptance and liberalism.”

“We try to convince students that writing need not be hard,” she says. “Woody’s favorite instrument was his typewriter; he used it a lot, because he always had something to say. Woody was a class warrior—the voice of the common man. He identified with hard-working men and women—such as migrant farm workers in the Great Depression—and he opposed corporate fascism; that spirit is still relevant. If Woody Guthrie were alive today, he would have been part of the Occupy Movement.”

McCloud says the center also tries to inform visitors about Huntington’s Disease, the degenerative neurological illness that ravaged Guthrie for his last 14 years and cut his career and life short.

To keep Woody’s proletarian, activist spirit alive, the Center initiated a Woody Guthrie Prize in 2014, “to honor the work of those who speak for the less fortunate through music, film, literature, dance or other art forms and who also serve as a positive force for social change in America.” The first award was presented posthumously to Pete Seeger, who died just before the February ceremony in New York. Pete’s grandson accepted on behalf of the family.

Reflecting on my visit to the center, I was fascinated by the number of contemporary musicians who identify with Guthrie’s populism and ethos—including Bob Dylan, Ani DiFranco, Steve Earle, Corey Harris, Billy Bragg and, of course, his son Arlo. In the Center’s gallery space for temporary exhibitions, while I was there, five photographers look at the 40-year career of Bruce Springsteen, and it’s easy to see more than a little Woody in The Boss.

In front of the center is a block-long public green space with an inviting shelter for free concerts and picnics. The streets around Guthrie Square have been dubbed Reconciliation Way, and that gesture seems a warm and fitting welcome, erasing whatever skepticism I may have started with. Yet it’s a Woody slogan, memorialized on a sticker in the gift shop, that’s stuck with me longest: “Take it easy, but take it!” Pure Woody!