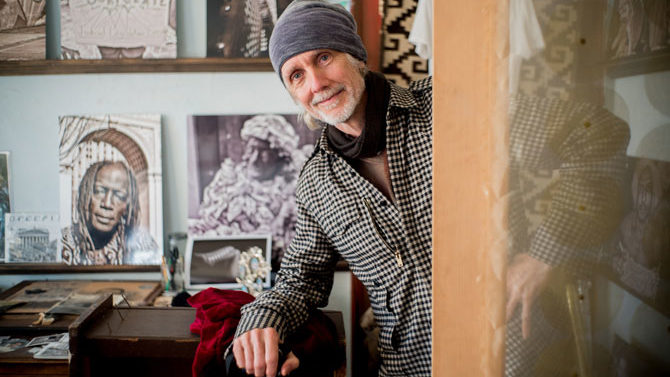 I discovered Jeremy Ayers’ talents in 1983, when UGA art professor and filmmaker Jim Herbert made a video featuring the band Limbo District, capturing its appealing, raucous antics. Last year, I learned a lot more about Jeremy’s iconoclastic career when I was invited to introduce him at WUGA’s Artists in Residence series, a fundraiser for the campus NPR affiliate in which local artists open their homes and studios to the public. Jeremy’s creativity was impressively displayed that day by his early paintings, his portraiture, three books of photographs and a spoken word performance he delivered to the crowd.

I also learned there was a lot more that this modest, reserved artist rarely disclosed. For example, he had earned songwriting credits for the B-52s’ hit anthem “52 Girls.” Living in New York City in his 20s, he fell in with the downtown art scene, including Andy Warhol’s Factory; adopted a drag nom de plume, Sylva Thinn; was friends with Holly Woodlawn, Candy Darling, et al; and wrote a gossip column for the then-hip Warhol magazine, Interview.

Jeremy told me he took up photography in his 30s as a way to open up to people and get past a developing shyness. He photographed people many would ignore—a bag lady, down-on-their-luck street people, clowns, angry protesters. His work is full of compassion, since he tended to shoot from his heart. (Check out jeremyayres.tumblr.com).

Of his three photo books, one focuses on Athens culture, another street life in New York and the third captures the spirit of Occupy Wall Street a few years back. His work was shown at the International Center for Photography in New York and locally at Ciné and ATHICA.

I became fascinated by Jeremy’s dualities. He earned degrees in both painting and English literature to enhance his visual and verbal sides. He was an intellectual who tended his garden meticulously. He was equally serious and playful, often leading spontaneous singing conga lines around his sedate, intown neighborhood. He was a mix of traditional and quirky, commonly riding his bicycle around town long before the spandex generation. He had stacks of books around his home, but no television in sight.

While a forward-thinking free spirit, as a native Athenian, he also appreciated local history and his neighborhood. He was especially attentive to neighbor Kate Holliday, who lived to be 105, and to his 98-year-old father, Robert Ayers, who taught religion at UGA.

I needed no further proof of Jeremy’s place in the Athens arts firmament than seeing his large oil portrait by the renowned painter Sunny Taylor that’s on display at the Classic Center.

Keith Strickland (The B-52s): It’s a heartbreaking loss. We met at 16 and had a long friendship. He was part of that Athens scene in the mid ’70s—poets and artists—that the B-52s came out of. He was a big inspiration and became a mentor to Ricky [Wilson] and me. He was gentle, generous, kind-hearted and truly engaged—always with a sparkle in his eyes. He touched so many people over the years, yet remained who he was the whole time.

Kai Riedl (Slingshot Festival): Jeremy and I considered ourselves best friends for the last 20 years. He was an artist of friendships and was always present with who he was with. He greatly respected his family, his father’s work and his mother’s spirit. His father was very proud of him and gave him the groundwork to be an outspoken free thinker. Jeremy embraced death as a friend, as part of the cycle of life. He had acknowledged the fragility of life for a long time. Without his singular spirit, Athens wouldn’t be what it is.

Daniel Nelson (Ayers’ partner and performer, writer, director, designer, producer): Jeremy was beloved in New York, but Athens was a perfect world for him to work in all his different areas. We met in 2005 through Cal Clements, who was studying Richard Foreman’s theater. Jeremy was an amazing collaborator who gave me the best feedback imaginable; he taught me to see the work non-judgmentally. Jeremy embodied compassion and embraced self-exploration—creating for its own sake. He was one of the few people who found a way to express unconditional love, and he practiced it. That’s very rare. He really touched people and was memorable.

Jill Carnes (artist and Elephant 6 musician): Jeremy was a kind and thoughtful person, extremely imaginative with a wry sense of humor. To me, he was a combination of father figure, brother and wacky uncle. He was mentor to a lot of local artists, including me, and never really understood how people could say they were bored, because there was so much out there. We were pals for 33 years, and I love him dearly.

Blair Dorminey (Cobbham neighbor, lawyer, arts advocate): Jeremy was the quintessential Athens bohemian. He excelled in everything he did and was artistic in every way—his house, his garden, even the way he dressed. I called his everyday style “gothic romanticism.” I was especially impressed with how many others he influenced. He was unrelentingly positive in the face of the world’s adversity. He showed us another way of being and was foundational for the Athens arts scene. He was always in the mix.

Cal Clements (Rubber Soul Yoga owner, clown school teacher, avant-garde theater director): Jeremy loved complexity but also appreciated ambiguity. He was a disciplined artist, yet playful. Jeremy loved to photograph outsider characters and tell their stories. He was also a collector, and his house is full of the work of local artists, books, symbols and artifacts with a personal backstory. He was an original who defied classification.

Roy Bell (Cobbham neighbor, Athens home-builder): I met Jeremy in high school and recognized that he was a worldly, thinking individual. He taught us about theater, music, art and fashion, but mostly he taught us about being who we were and who we wanted to be. I remember when Jeremy went to New York and became Sylva Thinn, and I saw a picture of him with Andy Warhol and was blown away. I thought he was destined for stardom, but he always came back to Athens. He is part of the reason Athens is such a cool little place to live with a thriving artist community.

Friends and fans will celebrate Ayers’ life and work at the next installment of the New Town Revue on Nov. 18. Stay tuned for more coverage of that event.