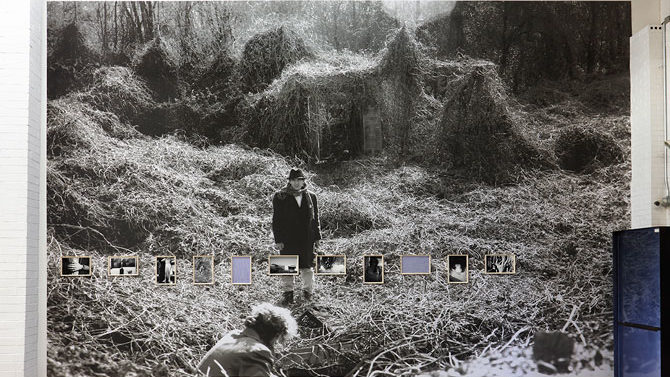 Beyond his renowned musical career, Michael Stipe has long been a fine-art photographer with an offbeat sensibility. To showcase that side of his artistic talent, Stipe mounted a solo exhibition of photographs, which opened at the Journal Gallery in Brooklyn, NY in early July. The gallery show coincides with the publication of his latest photo book, titled Volume 1.

Entering the small, chic gallery, the first image viewers confront is a floor-to-ceiling photo of Ayers standing in a field of kudzu in winter. The stark undulations of the vines and the lone figure in an overcoat and signature hat is simply otherworldly, yet also a bit creepy and menacing. The scale, similar to Jeff Wall’s narrative pictures, enhances the impact of its visual and dramatic appeal.

Stipe’s second homage to Ayers, whom he acknowledges as both mentor and first love, is openly tender and revelatory. Behind a partition on the back wall of the gallery is a video Stipe made in 2014 of Ayers dancing alone. Ayers moves with balletic elegance; he’s fluid and floppy, an obvious free spirit. (Stipe said he shot the video when Ayers was “in his prime—at age 65.”) If you watch the video for a while, you can easily see the influence Ayers had on Stipe’s wispy onstage presence during his 30-year career with R.E.M.

The centerpiece of the gallery show is a large installation that displays memorabilia and odd artifacts on a series of stacked 1970s-style end tables. Among the items on the shelves are a B-52s album cover, a 1985 picture of Stipe with Andy Warhol, a book titled Giants of the Twentieth Century and a press photo of Janet Armstrong, wife of astronaut Neil. The disjointed work takes on an aura of a personal scrapbook.

The other parts of Stipe’s gallery show are a linear layout of his new book and a wall of mixed images of male nudes, all in black and white. These photos, the gallery’s press release states, capture Stipe’s “idiosyncratic notion of queerness and masculinity.” While some of Stipe’s pictures are big and bold, none are as dramatic and polemical as Robert Mapplethorpe’s photos in that genre.

Overall, the exhibit is spare and polished, almost minimalist. Some pieces of it read like celebrity identification. The best part for this viewer was Stipe’s endearing tribute to Ayers, whom he recognizes as having given him so much in his art and life. The show, both genuine and generous, remains on view through Aug. 12.