Digby Further Explains What the President-Elect Is Doing 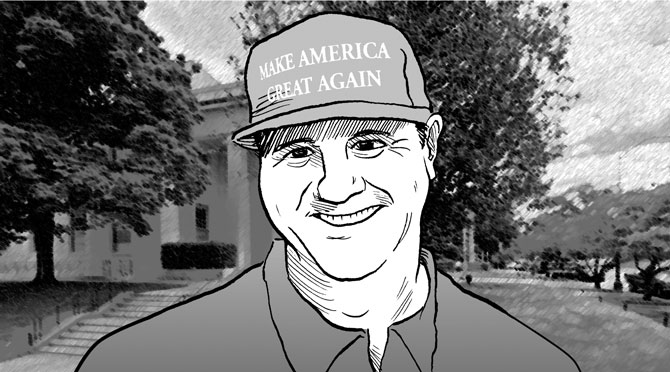 “Did you watch Mr. Trump’s Ohio speech?” he asked.

“That’s what winners do,” Digby said.

“Some winners are gracious,” I said.

“I mean not arrogant,” I said.

“They’ve got such respect for us,” Digby said. “Anything we want for our country is now possible.”

“China might have something to say about that after your guy chatted up the leader of Taiwan.”

“Who cares?” Digby said. “Mr. Trump talked with the Pakistan guy, too.”

“I thought you liked gracious,” he said.

“Extremely dishonest people,” Digby said. “Y’all said there was no way Donald Trump could break the blue wall. We shattered that sucker. We won. We won big! He’s tougher than the NFL.”

“But you didn’t win a majority of the voters.”

“It’s still part of the country, last I heard,” I said.

“Well,” I said, “after Trump gets through with these victory laps, he’ll have to start governing.”

“Like Dr. Ben Carson for Housing and Urban Development?”

“A man who wants to strip health insurance from 20 million people” I said, “and hand Medicare over to the insurance companies.”

“You’ve got to get used to the idea that big government is over,” Digby said. “The corporations are in charge, and they own Congress.”

”We’re going to bring them back. The wall that keeps the Mexicans out will keep American industries in. Look at Carrier.”

“Crony capitalism,” I said. “Trump bribed Carrier to keep some of their jobs here. Is he going to use our money to bribe every plant that threatens to go offshore?”

“He knows the art of the deal,” Digby said.

“That why he did so well with casinos?”

“There you go again,” Digby warned. “You don’t seem to realize that the press isn’t as free as it used to be.”

“The Constitution says whatever the Court says it says,” Digby pronounced, “and we’re going to take care of that.”

“Somebody’s got to hold Trump accountable,” I said. “If not the press, who’s going to do it?”

“How about the voters?” Digby said.

“But he tells them one thing today and something else tomorrow.”

“But he changed what he said 141 times during the campaign,” I said.

“Who cares?” Digby said. “He won, and his voters know where he stands.”

“He’s an entrepreneur,” Digby said. “He makes things up as he goes along.”

“He said y’all were going to drain the swamp, but he’s inviting the swamp monsters into his administration—like that Goldman Sachs guy who made his cash running a foreclosure mill that grabbed the homes of the very people who voted for Trump.”

“The President-elect believes it is better to choose people who know how to make money,” Digby pronounced.

“No matter how they made it?”

“Money is money,” Digby pointed out, “just like votes are votes.”

“Trump says he would have won the popular vote, too, except for the millions of illegal votes,” I said. “That’s a false statement.”

“The President-elect can say whatever he believes to be true,” Digby said.

“Like Clinton should be locked up for using an insecure mail server, but General Petraeus should be considered for Secretary of State, even though he gave classified secrets to his mistress?”

“General Petreus is an American hero,” Digby avowed. “We’ll be ready on Day One to start putting America first again.”

“Do you think Obama hasn’t been doing that?” I asked.

“Well, I guess the best we can hope for on our local stage is to keep on winning here at home,” I said.

“I wasn’t aware that you were,” Digby said.

“And what did that get you?” Digby asked.

“Well, at least it shows our strength locally,” I said.

“They don’t have a majority,” I said.

“I guess you’re right about that,” Digby said. “But they have the government.”