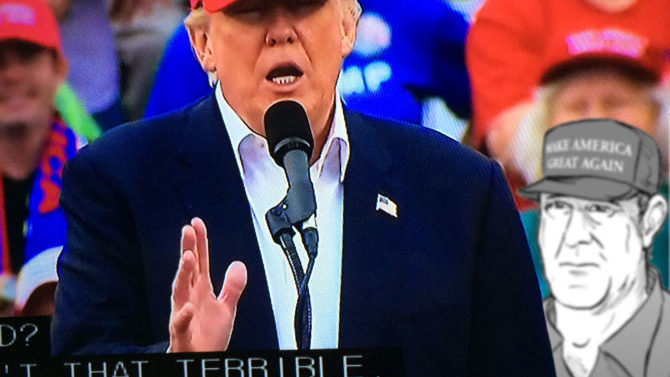 To my surprise, I saw my friend P.T. Digby on TV at Trump’s rally in Mobile.

“So, what was it like?” I asked him after he got back.

“It felt like America is great again,” Digby said.

“Because Rick Perry will be in charge of our nuclear arsenal?” I asked.

“Because Ben Carson will be in charge of rebuilding our cities?” I asked.

“Because the oil and gas industry will be in charge of the State Department and the Environmental Protection Agency and Interior?” I asked.

“Of course,” Digby said. “Listen, you’ve got to understand that the world economy is based on gasoline. If we don’t control it, we’re doomed.”

“But if we continue to be dependent on gasoline, our whole planet is doomed,” I said.

“There’s no real evidence of that,” Digby said. “Unless you believe in science.”

“Of course I believe in science,” I said.

“Science is just a theory,” Digby said. “Mr. Trump’s theory is just as good as yours.”

“But Digby,” I said. “Aren’t you concerned that the Russians elected Trump?”

“Look,” Digby said, “Mr. Putin knows Mr. Trump and his people well, and he wants to continue doing business with them. He couldn’t vote for Mr. Trump, and he doesn’t believe in democracy anyway, so he helped out the only way he knows how.”

“But not the Republicans?”

“Why would you hack your friends?” Digby asked.

“Speaking of friends,” I said, “Being a friend of Trump seems to be the only criterion for being appointed to high office. I mean, his bankruptcy lawyer as ambassador to Israel?”

“Who can you trust more than your bankruptcy lawyer?” Digby asked.

“Mr. Trump is comfortable with other billionaires,” Digby explained. “Money is the standard that counts. They’ve made themselves great. Now they’ll help him make America great again.”

“And Congress will make them even greater by cutting their taxes,” I said. “And cutting Social Security and Medicare and Obamacare and Medicaid in order to pay for the billionaires’ tax cuts.”

“Self reliance will make America great again,” Digby said, “and it will give everybody the opportunity to become a billionaire. The government is not going to support losers anymore.”

“People are losers because they get old and get sick and need affordable health insurance?” I asked.

“Back when America was great,” Digby said, “people didn’t expect the government to take care of them. “Families did that, and churches. The government left business free to make money, without all these regulations we have today.”

“Like protections for our air and water, for instance?”

“Does it not bother you,” I asked, “that Wall Street speculators will have a free hand, that our natural resources will be controlled by those who exploit them, that our schools will be defunded, that our civil liberties will be protected by an authoritarian Congress and a Ku Klux attorney general?”

“And our complicated world, armed to the teeth with nuclear weapons, will be controlled by a man whose only knowledge of international relations is the profit motive?”

“Your Mr. Trump’s billionaire, anti-government cabinet is a finger in the face of democracy,” I declared.