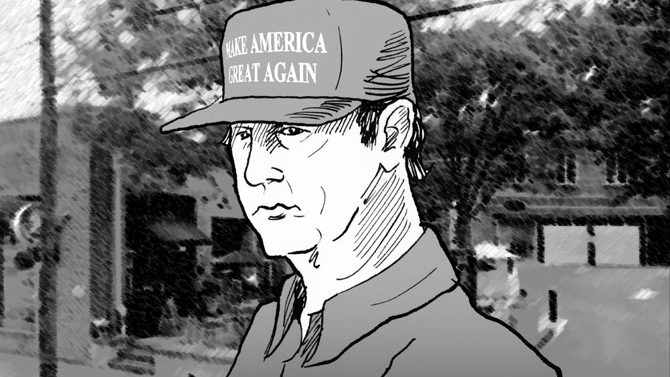 My friend Digby got into the Trump thing pretty heavily, and I hadn’t seen him much until the other day.

“America’s great again,” Digby said, when I ran into him outside Hendershot’s.

“Because we fired Obama,” Digby said.

“That’s because he is from Kenya,” Digby said.

“So, you like the way things are going after Trump’s election?” I asked Digby.

“It’s even better than I expected,” Digby said. “He’s hiring the best people.”

“His son-in-law, that right-wing agitator, the loose cannon military guy and the racist Alabama senator?”

“These are tough times,” Digby said. “No more coddling people.”

“But their money doesn’t go to the insurance companies,” Digby pointed out.

“But, Digby,” I said. “Aren’t your mother and father on Medicare?”

“Yeah,” Digby said, “but they don’t like it. All it does is pay their medical bills.”

“The Republicans are going to give them a lot more choices,” Digby said. “They’ll be able to pick a plan that has good TV ads.”

“I guess you think Trump will bring back all those jobs replaced by robots,” I ventured.

“He certainly will,” Digby asserted, “just as soon as he rounds up all those robots and sends them back to wherever they came from.”

“But look,” I said. “Trump was going to drain the Washington swamp, and instead, he has jumped right into it. All the Republican insiders and lobbyists have embraced him, even Mitt Romney.”

“At the end of the day,” Digby said, “it’s power that counts. Those rubes in the Rust Belt don’t have any.”

“What about the Constitution?” I asked. “Trump doesn’t even respect the First Amendment right to free speech. He attacked the cast of Hamilton over their plea for his administration to protect all American citizens.”

“Listen,” Digby said. “I wouldn’t worry about that too much. Remember that Mr. Trump has a short attention span. I don’t think he has read the amendments yet.”

“What about all this hatred of people who are different?” I asked.

“It’s the whole point of making America great again,” Digby said. “If you can’t hate your neighbor who’s different from you, how are you going to hate the Chinese or the Iranians?”

“Why should I hate them?”

“If you don’t hate them, how are you going to bomb them?” Digby explained.

“Of course I’m talking about war,” Digby said. “International relations is just like a real estate deal: Somebody wins, and somebody loses. You don’t want America to lose, do you?”

“Everybody loses if we have another war,” I said.

“That’s the kind of thinking that has made America weak,” Digby asserted, “I guess you want to tax our billionaires, too.”

“Speaker Ryan and Leader McConnell know that’s wrong,” Digby said. “If we slash government support for Social Security, health care, infrastructure and education, we can afford to fight other countries and cut taxes on our billionaires at the same time. It’s the Republican way.”

“Where in the world did you get ideas like that?” I asked.

“Pence, Newt, Rudy, even our guy Hice,” Digby said. “Clear thinkers who’re not fooled by all this malarkey about climate change, equality and kowtowing to women and minorities.”

Tifton B. Merritt is an old journalist formerly associated with The Athens Observer.