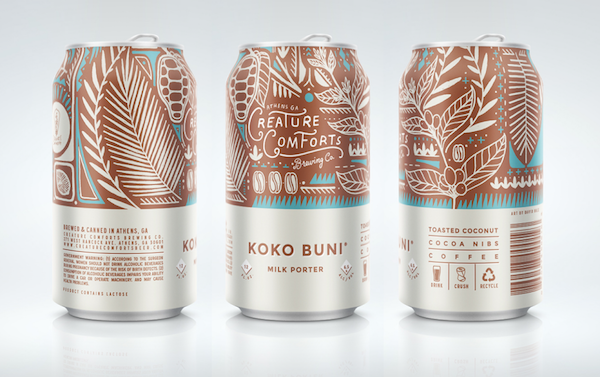 Athens brewery Creature Comforts is rereleasing its popular milk porter, Koko Buni, later this month in cans and on draft—just in time for the cold weather that a week ago seemed like it’d never come.

Koko Buni (6.8% ABV) is brewed with Ecuadorean chocolate from Condor Chocolates and 1000 Faces coffee, as well as vanilla and toasted coconut. Local artist David Hale won a CNBC competition in April for his can design.

As I recall, Koko Buni sold out at package stores within days last year, so if you see a six-pack, snatch it up.

In other local beer news, Terrapin’s purchase by MillerCoors is paying off in terms of expansion. Terrapin beer will be distributed in Kentucky and Ohio starting next year, and the brewery is opening a tap room and restaurant serving Fox Bros. barbecue next door to SunTrust Park, the Smyrna Braves’ new home, in 2017.

“We’ve been talking about opening Kentucky and Ohio for almost three years, but have held off because we wanted to focus our resources on Georgia and our current markets,” VP of Sales and Marketing Dustin Watts is quoted as saying in the press release.

The company is hiring a regional sales manager for the two new states, to be based out of Cincinnati.