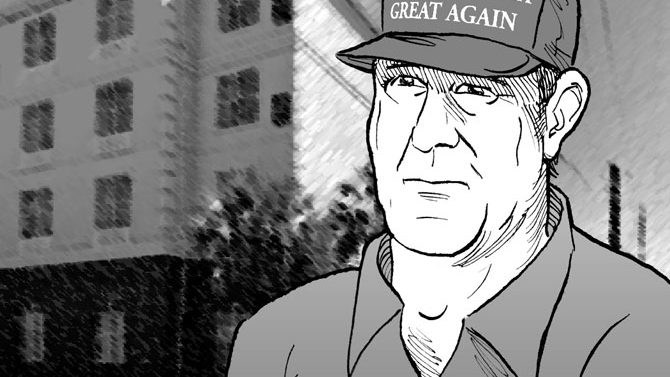 My friend P.T. Digby keeps me up to date on Republican happenings. I ran into him recently outside their Christmas party.

“So, Digby,” I said, “when do you think Trump will move to Washington?”

“Why should he do that?” Digby asked.

“Well, that’s where the machinery of government is,” I said.

“The machinery of government is obsolete,” Digby rejoined. “In the digital age, Mr. Trump can handle things just fine from Trump Tower.”

“Mr. Trump is too busy with his own brand to be bothered with running the government,” Digby said. “That’s why he has chosen such outstanding leaders to head up the departments.”

“Trump’s cabinet will be made up of men and women who hate the principles of the departments they direct,” I said.

“Pump the oil out of the swamp and then frack it, using uninsured, poorly educated, minimum-wage, non-union workers,” I suggested.

“How can America be great if nobody makes a living wage?” I asked.

“It’s very simple,” Digby explained. “All those Mexicans thought America was great enough to pour across our border-without-a-wall, and they were glad enough to take those low-paying jobs. We kick them out, build the wall, and then American workers get those jobs, and we’re great again. Too bad the Democrats couldn’t grasp that.”

“The Mexicans took the menial jobs,” I said. “Robots are taking the skilled jobs.”

“The new secretary of labor is all about robots,” Digby said. “No sick days, no vacations, no wages, no blood coming out of their whatever.”

“But what happens to American workers?”

“The generals are going to need a lot of workers, Digby said. “We’re going to have to take care of China and Iran and the international Muslim terrorist consortium and all that.”

“It always has,” Digby affirmed.

“Several of them didn’t turn out too well,” I said.

“Only because we were afraid to use weapons of mass destruction,” Digby said. “Mr. Trump’s generals know how to fight a war, and he’ll have the codes in his phone.”

“He may nuke ‘Saturday Night Live,’” I said.

“He doesn’t waste time beating around the bush—no pun intended,” Digby said. “‘You’re fired.’ That certainly fits into a tweet, and Hillary got the message.”

“But, Digby,” I said. “How can America be great if our public school system and our inner cities are allowed to deteriorate, if there is no protection for our air and our water and we remain dependent on oil and coal and ignore global warming and our citizens can’t get health care?” I asked.

“That’s just the sort of drivel I’d expect from the dishonest, liberal press,” Digby retorted. “What you don’t understand is that we’re also going to cut taxes on corporations and the wealthiest families, and then they’ll have an incentive to invest again. Our industries will flourish, and everybody will have a job and can pay for their own health insurance and send their kids to a good school instead of a government school.”

“Don’t forget we have a majority in both houses of Congress and very soon on the Supreme Court,” Digby said. “There will be penalties for the smart-ass press. Our ally Mr. Putin has taught us about that.”

“Meanwhile, what about that Congress?” I said. “You’ve got the country so gerrymandered that Congress represents the minority in our country who oppose both abortion and birth control, want to turn health insurance, Medicare and Social Security over to the highest bidder, believe global warming is a hoax just like evolution and are convinced that we can have a strong economy by cutting taxes on the wealthy and their corporations while building up the military budget. How in the hell is that going to make America great?

“Because we’ll be self-reliant again,” Digby said. “We won’t be coddled by the government anymore.”

“Unless we’re billionaires who pay no taxes or corporations that get tax breaks by threatening to go offshore?”

“The government will help those who help themselves,” Digby concluded.