An Athens Church Steps In to Save Soup Kitchen 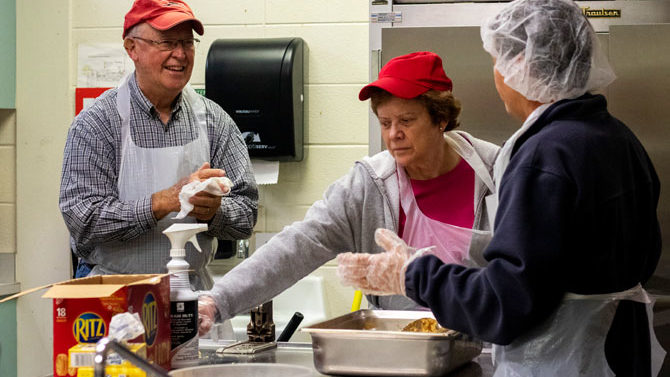 For three decades, Our Daily Bread has provided free meals to Athens’ working poor and homeless, creating a basic place to eat, but also a gathering place for a community of people. That community has continued to meet day after day, even as Our Daily Bread grew, shrank, was displaced by fire and, for the past few years, settled into a new home at First Baptist Church on the western edge of downtown.

Over the years, the breakfast and lunch meals became a time to share news, ask for help and receive services like bus passes, GED classes, winter coats and free health screenings. Late this fall, the program was on the brink of closing, but through the quick actions of First Baptist and others, it was saved and, as of the new year, absorbed by a local institution again.

“For many of Our Daily Bread’s clients, these are their primary meals every day, and they really count on that,” says Frank Granger, the longtime minister of Christian community for First Baptist Church.

Started by Oconee Street United Methodist Church in 1989, Our Daily Bread became part of Athens Urban Ministries (later Action Ministries-Athens) and for years was led by an employee that ran the soup kitchen part-time and pastored the church part-time. About a decade ago, Action got a full-time administrator in Athens, and programs grew. Clients got a hot meal, but also tax prep help, GED tutoring, health advice and other assistance. Over the past several months, though, programs surrounding the meals were eliminated, and by Nov. 1, Action no longer planned to serve breakfast, either.

Our Daily Bread has provided breakfast in good times and bad—even the day its home was destroyed by fire. The morning after Oconee Street UMC burned in April 2013, Our Daily Bread opened at First Baptist Church.

“Our church has always had a role with Our Daily Bread,” Granger says. “We served meals as one of the supporting churches. But the morning Oconee Street Church burned, Action’s local director at the time, Erin Barger, called our pastor and said, ‘Our folks have nowhere to eat.’ We opened the church that very day.

“The call to host Our Daily Bread in 2013 fit in with things that we were feeling led and called to do. So, we became the permanent home,” Granger says. First Baptist has provided the facilities, including a kitchen, dining room and volunteers. Area churches and civic groups prepared and served meals, while Action managed schedules, volunteers and supplies.

For years, Our Daily Bread served every day, including weekends and holidays, closing only on Thanksgiving, when special community meals would fill the need. A little more than a year ago, though, the program stopped serving sack lunches on Saturday and Sunday. That decrease in services concerned volunteers and supporting congregations. Volunteers became even more alarmed by an announcement in October that breakfast would end, leaving the 60-plus people who ate that meal each day in the cold.

“That was a difficult point for us,” Granger says. “We recognized that someone needed to step in and make sure that there was continuity of service, that people continued to get fed. We knew it was more than we could do by ourselves.”

Faith and civic leaders worked fast. An ad hoc group including pastors, social service workers and local government officials met to discuss what to do. First Baptist hired an employee, Betty Booker, to organize breakfast. Golden Pantry agreed to donate prepared food through November to give the church time to build a roster of donors. By the end of the year, Action and First Baptist agreed that the church would take over lunch, as well. The church hired another part-time employee, John Kirkpatrick, to handle that meal.

First Baptist took over the contacts and schedule of sponsoring churches and other groups. At the beginning of this year, the church handed the baton to Downtown Ministries—an Athens-based faith group that runs a private school, sports programs and other functions—which took responsibility for the employees and soup kitchen.

“The support from the community was a reminder of what is at the foundation of Our Daily Bread. It’s local neighbors helping to meet needs that are local,” Granger says. “We saw how people desire to see Our Daily Bread provide services beyond just a meal. We saw that there was a way for that to continue.”

“The community’s commitment to Our Daily Bread hasn’t changed, and we are really excited about that,” Byrd says. “We are trying, as we start, to make sure we have a solid structure, but the goal is to return to the level of programming we’ve had in this community in the past, and in some ways to expand that programming.”

The transition has gone more smoothly because of Booker and Kirkpatrick, the employees hired to coordinate meals. “They are familiar with the logistics of the program, but they also love the people who rely on Our Daily Bread,” Byrd says. “That’s important.”

Lora Smothers is managing Our Daily Bread for Downtown Ministries. The general email for ODB is dailybreadathens@gmail.com. Smothers can be contacted at lsmothers@downtownministries.org.

The program needs groups to prepare and serve breakfast and lunch. Groups that wish to donate financially but don’t have volunteers to serve food can sponsor a breakfast prepared by Golden Pantry and served by soup kitchen volunteers and staff.

According to an Action Ministries email to supporters, the organization plans to focus on regional hunger relief and literacy programs, including the Smart Lunch, Smart Kid program, which works to feed children during the summer and school breaks, and extending the Smart Kid Afterschool program, which is designed to bring at-risk children not learning at grade level to reading and math proficiency.