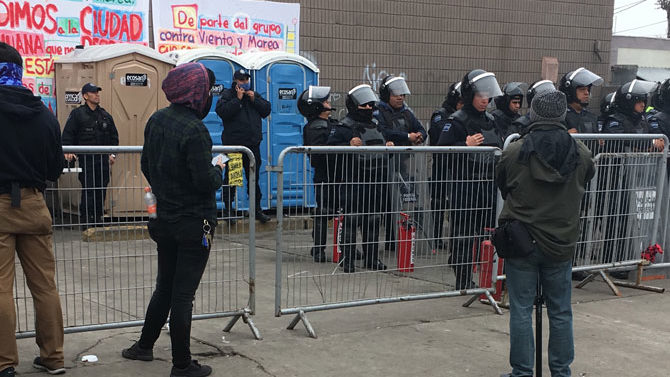 When Imani Scott-Blackwell and Stephanie Flores got to Tijuana just before Christmas, they thought they’d stay a week. Three weeks later, they still were there, having seen firsthand the chaos south of the border, where migrants are waiting to seek asylum in the United States.

“We still haven’t processed everything we saw there,” Scott-Blackwell told a group gathered at the Athens-Clarke County Library earlier this month to hear about what’s happening in the Mexican border town.

Now, Scott-Blackwell plans to return to Tijuana for three to six months to work to provide emergency housing there.

“There is no stable housing. Quite frankly, people are waiting on the streets, people are waiting through the generosity of individuals who will pay for them to stay in a hotel for a few nights,” Scott-Blackwell said. “But there is no actual infrastructure where people are housed with dignity and respect with their basic needs met over the time of this process.”

Thousands of migrants from Central America and Mexico arrived at the border in November and December seeking asylum in the U.S., but now they face a confusing bureaucracy that is unlikely to grant them long-term legal status in the U.S. Most are waiting to be allowed a hearing to show they have a credible fear of violence if they return home, which would allow them to enter the U.S. and begin the process of gaining asylum to stay. Because the U.S. only allows a certain number to be heard each day, thousands of migrants are camped out just across the border, waiting on a chance to make their case.

Working with Athens for Everyone, Scott-Blackwell, Flores and Jimena Vargas-Pacora (the vice president of A4E) volunteered with the New Sanctuary Coalition, a 10-year-old organization based in New York City. Flores and Vargas-Pacora, who both speak Spanish, assisted with preparing migrants for credible-fear hearings, while Scott-Blackwell worked on other logistics, such as driving migrant families the final stretch to the border.

What they found on the ground in Tijuana was a chaotic situation in which well-meaning volunteers didn’t have the training, resources or ability to do what needed to be done to support migrants.

“It was immediately concerning that we were in another country, coming to work with an organization that didn’t really have the infrastructure to do what we thought we were going to be doing,” Scott-Blackwell said. “The biggest problem we saw was the lack of safe housing.”

Migrants at the El Chaparral San Ysidro border crossing in Tijuana have organized a numbering system in which migrants who have just arrived on the Mexican side of the border appear before an appointed volunteer from the migrant community, register to wait and are added to La Lista, a written queue of names kept in an old-fashioned ledger. Once or twice a day, numbers are called from the book, and a few dozen migrants at the top of the list may travel to a U.S. detention center to continue the asylum process.

La Lista isn’t a legal mechanism, but a process the migrants themselves adopted to try to impose order, authorities say. Activists say La Lista is illegal, a delay tactic tacitly supported by the Mexican and U.S. governments in violation of international law.

While preparing migrants for credible-fear hearings and empowering them to tell their stories is important work, Flores said, people seeking asylum also have immediate needs for food and safe housing.

In their time in Tijuana, the Americans witnessed hundreds of people evicted from a warehouse after a five-day stand-off with authorities. The Central American migrants had already been moved the month before from the Benito Juarez shelter, a sports complex that housed 6,000 people. Some simply refused to move again to another shelter farther from the border. While the government says the warehouse shelter was closed due to public health concerns, activists say the government stopped providing basic sanitation, setting up an emergency.

Authorities are careful to keep the housing crisis out of tourist areas, Vargas-Pacora said, but also can’t or won’t provide basic support for the migrants. “[The migrants] were promised a safe space with sanitation and electricity, but they got none of that.”

The shortage of housing could get worse in the near future. Another caravan of asylum-seekers departed Honduras in mid-January. Meanwhile, the Department of Homeland Security recently released details of its “Remain in Mexico” policy, which would force migrants—even those who are found to have a credible fear of persecution or violence if they remain in their home countries—to wait out the months-long asylum-seeking process in Mexico, rather than in the U.S.

The simplest solution to the crisis is allowing migrants to enter the U.S. easily to go to work and wait out the asylum process, said Leanne Purdum, a PhD student in geography and an immigration activist.

Actions that legitimize the bureaucratic processes at the border are part of the problem, Scott-Blackwell said. But with a backlog of 800,000 cases in U.S. immigration courts and more people seeking safety here, nonprofits and Mexican cities along the border will be even more hard-pressed to provide basic humanitarian aid.

Scott-Blackwell, with the help of A4E, intends to return to Mexico next month and work with a new group to try to set up emergency housing. The effort has set up a GoFundMe campaign that had raised about half of its $2,500 goal at press time.

The activists are also discussing ways to house migrants once they are able to cross the border into the U.S. One of Scott-Blackwell’s ideas is to ask local residents to sponsor migrants monetarily, provide free services like medical care or legal assistance, donate food or offer up spare rooms as housing. Donations of clothing, hygiene products, over-the-counter medication and games are also needed.