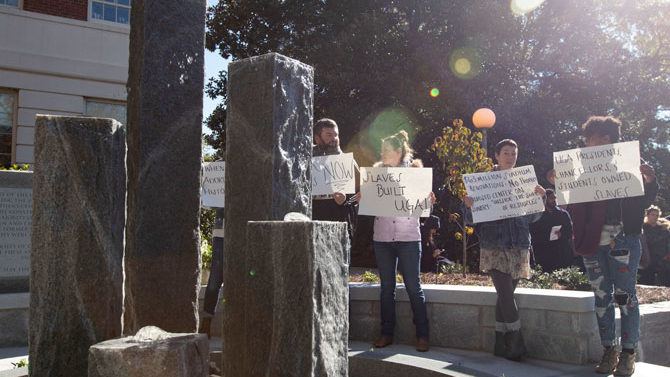 A committee of professors is demanding the University of Georgia administration apologize to an anthropology professor who was “publicly targeted,” as well as the presumed descendants of the individuals who were unearthed during the Baldwin Hall expansion project in 2015.

The ad hoc committee, appointed a year ago by the Franklin College Faculty Senate, released a 120-page report Apr. 17 condemning the intimidation of faculty and the lack of community consultation in the university’s decision to reinter what are believed to be the remains of enslaved individuals who were buried at the Baldwin construction site.

In response, President Jere Morehead stated he was disappointed in “the unfair narrative” in the report, according to a letter addressed to Franklin College of Arts and Sciences Dean Alan Dorsey on Apr. 22.

“It is one thing to debate the propriety of steps taken by the University in good faith, based on [the] guidance of the State Archaeologist Office, in response to this unique and complex situation. But it is another thing to impugn the integrity and motives of dedicated employees based on an investigation filled with rumor and anonymous sources,” Morehead wrote.

On Apr. 23, faculty senators voted to approve the report and keep the ad hoc committee as an investigative body. The Senate also voted to add a final appendix containing emails among the university, the Office of the State Archaeologist and the Georgia Department of Natural Resources from the day before the remains were buried at Oconee Hill Cemetery. Those emails suggest that UGA administrators were scrambling for cover after some in the local African-American community objected to the university’s plan for the remains.

Controversy persists over why the university shut out black community leaders about how the remains should have been handled and where they should have been reinterred. While some agreed with UGA’s decision, others, such as Fred Smith Sr. and Linda Davis, have advocated for the remains to be buried at an African-American cemetery, such as Gospel Pilgrim or Brooklyn Cemetery, which Davis, the descendent of slaves from Athens and Oconee County, has been working to restore.

On Mar. 6, 2017—the day before the unannounced reburial—the Office of the State Archeologist, in collaboration with DNR, wrote a letter addressed to Morehead within a span of two hours instructing him to reinter the remains at Oconee Hill, the closest cemetery to the Old Athens or Jackson Street Cemetery, which lies underneath Baldwin Hall and may extend well beyond its fenced-off borders throughout much of North Campus.

Emails between OSA and DNR officials indicate it was a matter of urgency. One official, whose emails are included in the appendix, canceled all his meetings the morning the letter was written.

The committee found the creation of the document and the letter itself to be odd for many reasons. “There was no reason for the letter to exist at all in terms of giving instructions, because OSA had given all their advice and education months [before],” said the head of the committee, English professor Christopher Pizzino.

“OSA is purely an advisory and educational office,” Pizzino said, and the university does not have to follow the instructions given by OSA; it only has to acknowledge the suggestions.

“As for the timing, it’s striking, because it’s the first and only business day that exists between the community outcry and the planned secret burial,” he told Flagpole.

The university initially said the remains belonged to people of European descent, but had known that was false for weeks when it announced that the remains were of African descent. At the same time, it announced that the remains would be reburied at Oconee Hill Cemetery. A community outcry followed. Meanwhile, graves were already being dug at Oconee Hill Cemetery before the public was notified about the burial, scheduled for Mar. 7. (A public ceremony was held two weeks later.)

“All of that together suggests the likely interpretation that the letter was solicited either by UGA or another official in order to provide legitimacy for a decision the university had already made, in the face of a community outcry that had already happened,” Pizzino said.

The university should not have been caught off-guard by the discovery of the remains in the first place, the report says, noting that human remains were found when Baldwin was built in the 1930s, and again in the 1970s. No one knows for sure what UGA did with those remains.

The committee found evidence of “an institutional culture that supports administrative priorities and prerogatives at the expense of academic freedom and integrity,” according to the report.

According to the committee, unnamed faculty members feared to speak on the record, but the report goes into detail about two instances of intimidation.

One already-publicized case of the administration allegedly intimidating faculty was in March 2018, after anthropology professor Laurie Reitsema gave a presentation to the Faculty Senate explaining the research at Baldwin Hall, in addition to community and faculty concerns. Greg Trevor, UGA’s executive director for media communications, wrote an op-ed in the Athens Banner-Herald calling Reitsema out specifically for criticizing the university’s decisions.

“Ironically, Dr. Reitsema is now one of the faculty members apparently criticizing the efforts of the institution—efforts to which she was a major contributor,” Trevor wrote, adding that the university’s actions were not “unilateral, irresponsible or unethical.”

Reitsema worked with a colleague at the University of Texas to analyze mitochondrial DNA from some of the more intact remains found at Baldwin Hall, discovering that the individuals were primarily of African descent and, based on the age of the remains, had most likely been enslaved. Board of Regents records from the era show several instances where UGA leased slaves from slave owners, and many administrators, faculty members and students owned slaves.

Reitsema was one of several people who advised administrators to consult with the community by holding a town hall meeting before making plans to reinter the remains, saying that it was standard ethical practice among anthropologists.

The report also alleges that Scott Nesbit, a dual professor in the College of Environment and Design and the Department of History, was intimidated by Pamela Whitten, the provost at the time.

In fall 2015, Nesbit taught a course on the history of slavery, with a focus on slavery at UGA. Nesbit was told by an unnamed administrator to communicate with the provost’s office about his teaching throughout the course. Later, Nesbit gave a talk about this course at the Athens Historical Society, where he said it would be advisable for the university to pay more attention to its history of slavery, in response to an audience member’s question. An administrator informed Nesbit that the provost was “not pleased” with his answer, according to the report.

“Dr. Nesbit was also told that his remark constituted ‘activism,’” the report states. “He was subsequently informed that the Provost was contemplating punitive measures against him, and that while unable to block his tenure, the Provost nevertheless was considering measures that would make it impossible for him ever to gain employment at other universities.”

Now, Nesbit avoids speaking about Baldwin Hall in his course on slavery, the report states.

Whitten, who is now president at Kennesaw State University, did not respond by press time.

The report includes other evidence that administrators have little interest in engaging with UGA’s legacy of slavery. In March 2017, Vice President for Research David Lee issued a call for research proposals with “ties to slavery.” But only two of 20 were funded, and former English professor Valerie Babb told the committee that she overhead Lee say he was interested in projects that were “not about slavery.” Babb said she left UGA for Emory University partly because of the way UGA handled the Baldwin Hall situation.

Trevor referred Flagpole to Morehead’s letter on the report when asked for comment. Morehead called Nesbit’s account and other allegations of intimidations and censure “unsubstantiated.”

Morehead issued a similar response when a coalition of activist groups and six local elected officials demanded in early April that UGA acknowledge its legacy of slavery and make reparations by raising wages for low-income workers and offering scholarships to black Athens high-school students, calling them “a small group… obviously driven by a personal agenda” that made “wildly inaccurate” claims.

The full committee report, and Morehead’s response, can be found on the Franklin College Faculty Senate website under the Agendas tab.