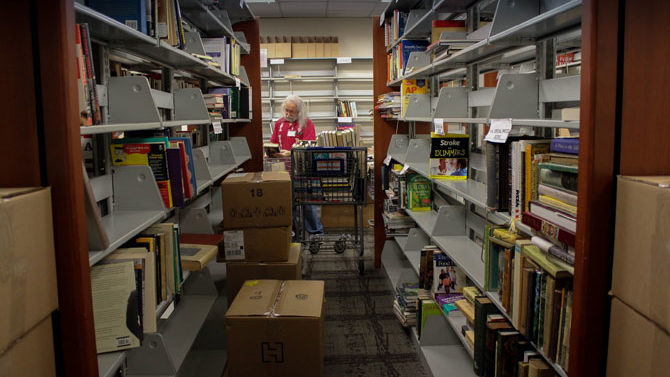 In the bowels of the Athens-Clarke County Library, behind doors that require secret codes, is the sorting room. This is where all donations made to the library go to learn their fate.

The man behind the process is Eddie Whitlock. Everyone at the Athens-Clarke County Library has a general title but seems to do multiple jobs, and Whitlock is no different. He’s officially the volunteer coordinator and library store manager, but he also handles all donations made to the library.

Whitlock has been at the library for about six years now, and finds himself in the sorting room four days a week for a few hours each day. “I’m not a professional librarian, but I do think of myself as a professional community helper, and a person who tries to connect people to existing resources, and I don’t think there’s any place better for that than the library, because you connect people with gathered knowledge, and you also open the door to better working with other individuals or groups for their own improvement and the improvements of the community,” says Whitlock

The donation-sifting process takes place in a room lined with shelves. The room may be jam-packed with books and other oddities, one long table piled high with things to be sorted or things waiting for space in a grocery cart. Or, the room will only have sporadic clusters of books, usually after the items are boxed for the twice-annual Friends of the Library book sale.

Standing between five grocery carts filled with varying levels of books, Whitlock explains the process of sorting books in particular. In the time it takes him to verbalize a sentence, he’s already determined the fate of two donated books. Every year, roughly 100,000 books are donated to ACC, Whitlock estimates. Among the five tiers to be considered when appraising a book and determining its future location, the library receives first dibs. Beyond that, books are given to the library store, the biannual book sale, or a company that gives the library compensation in return for its donations and recycling. All mass-produced paperbacks are available in the library on spinner racks for anyone to take. “We try to put books where they can best serve,” says Whitlock.

When a donated book is headed to recycling, he looks through the pages, seeking eye-catching images. If any are found, they’re torn out and made into postcards, which are sold in the library store.

“We try to make the most of every donation,” Whitlock says as he picks up the book he’s currently skimming for any postcard-worthy illustrations. After receiving a cartful of Reader’s Digest condensed books, Whitlock wants to cover the books, include the library’s information and distribute them to local laundromats. While joking about how boring sitting in a laundromat can be, he adds that the idea was approved (and a new grocery cart was labeled).

Books are not the only things being donated to the ACC Library. There is a puzzle of the United States that has only 48 states, putting it pre-1959. There are records. There are multiple puzzles from the 1940s, one of which is titled “Martha Washington Visits Valley Forge” and includes, according to the box, 350–400 pieces. The pieces themselves are thick, made out of a cardboard material, and look generally impossible to piece together properly. There’s also a “You Can Write a Novel” game kit that’s still covered in plastic, and a painting that was donated because, as the note attached to it said, it no longer matched the donor’s furniture. A plastic-wrapped Xfinity remote came in a box recently, as well as “Baby’s First Plaything,” a badly rumpled and barely-holding-together box from 1964 with a bird-themed mobile inside. “The things that are donated are wonderfully bizarre,” Whitlock says.

During his time in the sorting room, Whitlock begins posting funny book titles and other oddities to Facebook and Twitter. After taking a class at the library that taught him how to create a blog, he began his own, and he keeps it regularly updated with the more peculiar or humorous items. A recent blog post depicted two books: One details the history of curse words, and the other explains why cursing is good for you.

He always researches the history of the particularly eclectic pieces, simply because “it’s fascinating.” Over the past six years, Whitlock has seen donated books dating back to the 18th Century. “It’s amazing what people donate,” he says. Those kinds of books are sold for a special price at the book sales, but the puzzles and other oddities will also be for sale. Whitlock estimates that 95% of the book sales are books, and the rest are these randomly donated items, once they’re deemed unneeded by the library’s various departments.

Children’s toys often get donated. A box of crafts was recently donated, so Whitlock sent it to the children’s department to see if there was a need. Even the most random item will first go to “the department it’s most appropriate for.”

The library is always collecting donations, but it sees a spike in drop-offs leading up to the book sales, and then a sharp decline right after. “People think we don’t want donations, but we always want donations, because we’re sorting them, we’re boxing them, and we’re storing them for the next sale,” he explains.

From the donations that Whitlock reviews, about 20,000 books are sold per sale. Picture boxes upon boxes, stacked as mini towers, in about four supply closet rooms and office spaces—boxes jammed wherever there’s an empty spot. Each sale raises over $20,000.

On the Saturday Bag Day of the sale, where shoppers can purchase a grocery bag for $10 and fill it with as many books as possible, they sell over 300 bags.

The Friends of the Library have been hosting these book sales for about 20 years, explains Jane Russell, president of the volunteer group. A chunk of their budget each year goes to funding special projects for the library, staff travel and other supplies and resources that might be needed. Eighty-five volunteers and over 1,000 hours go into the set-up, running and take-down of just one of the year’s book sales.

“Everyone needs friends, and the library is no exception,” says Valerie Bell, the Athens Regional Library System executive director. “It is through the donations made to the Friends and their support for the library that we are able to do what we do for the community.”