Yoga Classes Are Offered at the Georgia Museum of Art 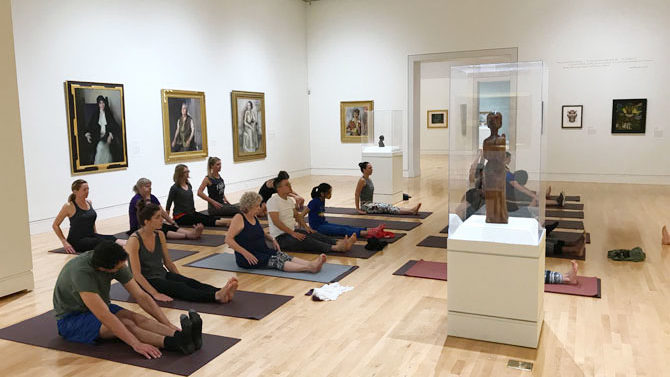 For many in the Athens community, the Georgia Museum of Art is a building they pass by on the way to something else. But beyond the paintings, sculptures and artifacts the museum houses, once a month, you’ll find yoga mats precisely lined up and ready for Yoga in the Galleries.

The idea of merging yoga, or mindful practice, and museums isn’t original to the University of Georgia or the Georgia Museum of Art. Sarah Kate Gillespie, a former curator of American art at the museum, helped facilitate the addition of yoga classes during her time as an instructor at a local yoga studio. “I knew that these things existed, but I think until I became more involved with [Five Points Yoga], it just hadn’t occurred to me to approach yoga in the museum as a partnership,” says Gillespie. Although the idea had been brought up a few times, no one at the museum knew where to begin to make the event happen.

In fact, the event seemed to really just appear. “One of the things [Five Points] really wanted to do was deeper engagement with the community, and I knew that we at the Georgia Museum of Art had been kicking around the idea of yoga in the galleries for a really long time,” says Gillespie. The inaugural event was in January 2018.

“I think everybody wants something different out of a museum visit or museum experience. I see yoga fitting into that,” says Curator of Education Callan Steinmann. Since the idea came to be, the event has been managed by Steinmann and the education department at the museum. She’s the logistics person behind the event, lining up the instructors and picking the gallery for that month.

Deciding which gallery to host the event in is a mixture of what’s feasible given the layout of the room and thinking about utilizing temporary exhibits, says Steinmann. “We do consider, ‘Is this art interesting to look at when you’re doing yoga?’” she says. Steinmann also enjoys disrupting the space in ways visitors wouldn’t expect: While some are roaming the galleries—as the museum is open later on Thursdays—others are practicing yoga among clothing, photography and objects owned by the last two rulers of Russia’s Romanov dynasty. At least, that was the experience for yogis of all levels during the January 2019 event.

“I love it because people go out of their comfort zone. I’m sure it’s not super-duper everyday for the museum to offer a yoga class right next to their paintings, and I don’t normally teach in a museum, and y’all don’t normally go to the museum or do yoga in the museum,” says SJ Ursrey, one of the instructors who frequently leads the practice. “I really love when they have these bizarre activities.”

This merger of museum, yoga and art may stem from the institution simply trying to utilize its space more efficiently and encouraging more people to wander the rooms before and after the events, but Gillespie says the museum’s other events mirror a growing interest in mind-body work. “It seemed like a natural extension to extend that into yoga—a more physically based practice,” she says.

“I’ve been so excited and pleased with the attendance over the past year,” says Steinmann. Despite a naturally slow start in the beginning with getting the word out, classes have been consistently full throughout the school year. The majority of attendees are UGA students, but the events are free and open to the public for any and all experience levels, although a ticket is required due to the constraints of having an event surrounded by valuable art. “We want people to enjoy being in the space and invite them to experience the museum in this different way, but we still have to consider the objects and safety of visitors, too,” says Steinmann.

Yoga classes are held on the third Thursday of each month from 6–7 p.m., with tickets available at the front desk starting at 5:15 p.m. Mats are provided.