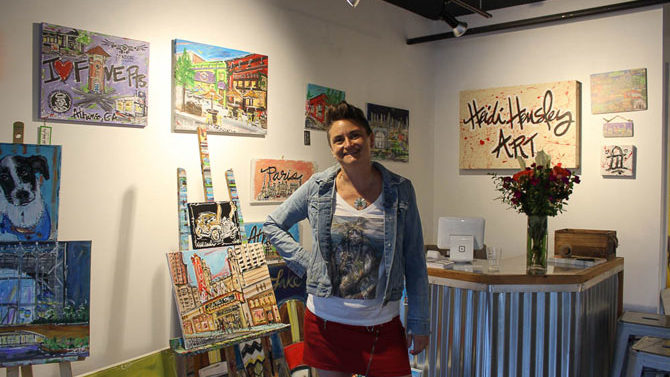 Heidi Hensley kicked off the month of May with a pop-up market in her studio behind the Classic Center (355 Foundry St.), the second she’s hosted since moving into the space last July. She converted the gallery section of her storefront into a collection of local art, ranging from eclectic ceramic mugs and bright, colorful paintings to candles. “We’re trying to get different sensory things,” says Hensley, in reference to the variety of artists featured in this month’s pop-up.

When Hensley “decided to jump off a cliff,” as she describes most of her more daring and life-changing decisions, and outfit this 3,000-square-foot space into her business and studio, she did so with the intention of providing an outlet for other artists in the future.

“I did it with the dream that I would not be an island, but give some sort of landing pad for the local artists around me,” says Hensley. “I wanted to create a space where the art community could come together and share our creations.”

Although she initially balked at the size of the studio, her business has been so successful, she uses the whole space. She never forgot her original idea, however—it’s just been tweaked slightly and transformed into periodic pop-ups.

“Because I feel so accepted, supported and loved in Athens, I feel like it’s only fitting to give back that same support and love,” she says. “As artists, we have an amazing ability to create—to be a vision or a voice for those who can’t find their own. This is where I’m raising my children, it’s where I vote, pay taxes. I want Athens to be the best community it can be, and if I have a gift to share in that goal, then I’m called to do that.”

Hensley is in the process of establishing a nonprofit called Community Canvas, designed to “bridge art and human connection.” She’s working with the Clarke County school system to launch a program, hopefully this fall, that will be based on turning artwork into profit. At the end, she’ll choose a student’s piece to be sold through her impending student line, and all the profits made will be collected into a college fund for the student.

“When they graduate, I can say, ‘I just showed you that your art can make money. You can do whatever you want to do,’” Hensley explains. Hensley was discouraged from pursuing the major she wanted in college, first due to an athletic obligation, then her mother’s worries. “I feel so fortunate to be an artist that can make a living,” she says.

On any given day—except Saturdays—Hensley can be found painting. It seems that all she does is paint since she decided to pick up a brush and give it a shot. “It was literally the heavens opening,” she says.

At the time when she decided to give painting a try, the housing market had crashed, severely affecting her income as an architectural designer, and she was back to waiting tables. A friend asked Hensley to paint an illustration of her mother’s house, and she realized that, not only could she paint, but she loved doing it. It became an obsession. “I just couldn’t get enough, so I was painting all the time,” Hensley recalls.

“She’s the most productive person I’ve ever known,” says Marbrey Myers, the sales and marketing manager at the studio and a friend of Hensley’s.

Hensley’s work can be found around Athens, but it’s her illustrations of America’s cities and towns that consumes most of her creative time. Over the past two years, she has painted 517 cities in America.

It all began while selling work at AmericasMart Atlanta, displaying her pieces of Athens, as well as her collegiate-themed creations. Hensley was approached by store owners from Hopkinsville, KY. She ended up selling 2,500 ornaments decorated with the city of Hopkinsville to a town with a population of 3,100. “I was like, ‘Oh my gosh, I could do this anywhere. I would never run out of cities to paint,’” says Hensley.

Although Hensley’s time is split between her children, the Artful Reminders line—which she describes as “these connective pieces of art that remind you of something important”—paintings of pets, collegiate-themed products, the cities and towns she’s most known for, ornaments and painting homes for the bank she partners with, she’s also always willing to meet the needs of a customer. “I want to give to people,” she says. “It’s what art and music are about, right? I want to connect with people.”

“She 100% enjoys coming to her job,” says Hensley’s longtime friend and business manager, Liz Payne. “She wants to talk to them and know their story and find that connection.”

Watching Hensley work is truly mesmerizing. Two easels are set up in front of the giant floor-to-ceiling windows at the front of the shop. Without breaking conversation, she holds her paint-smeared phone in one hand and a paintbrush in the other. There’s a small table behind her, covered in various shades of the rainbow, all mixing and mingling with one another. She stares at her phone, an image of a home, then begins rough strokes on the blank canvas in front of her. One of the cats that roams the studio comes up behind the canvas and begins to swat at the paintbrushes’ movements. Hensley’s not fazed. She moves to another canvas, letting the first image’s outline dry.

Finally, a third project gets her attention. It’s a city. The town’s characteristics and buildings are already painted, but she goes in and adds a bit more color here, some more detail there. Then, since she’s “got it down to a science,” she mixes more colors in the rainbow of options behind her, and returns to the now-dried homes. With a big laugh, she says, “Yeah, I just never stop.”