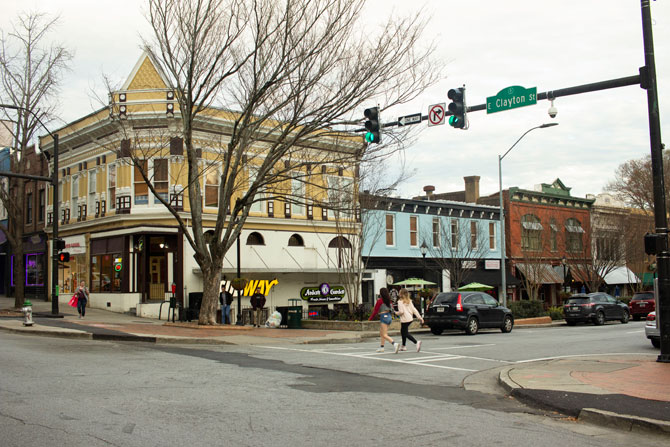 Clayton Street will soon be rid of its stale-beer stench and uneven sidewalks—but how soon?

Athens-Clarke County crews identified at least 60 different conflicts in January, when they conducted a pre-dig, according to Derek Doster, the project administrator. The next phase, which includes the stormwater system installation, was originally slated to start last month. The streetscape installation (above-ground) portion of the project was scheduled to begin in April 2019 on the block of East Clayton Street between College Avenue and Lumpkin Street.

The schedule was designed so the project would not affect the the 2019 football or Christmas seasons for Clayton Street businesses.

County officials are still assuring business owners that the project will not spill over into the fall and winter. But the stormwater work and likely the streetscape work will be delayed “by several months,” according to the ACC Clayton Street Improvements website. The new schedule will ultimately depend on utility companies’ cooperation.

County officials have said all along that they didn’t know what to expect when they started digging into Clayton Street. Obstacles identified include previously unknown power, water, gas and sewer lines, vaults, conduits and other items underground. Doster said crews identified utilities that were unmarked on old county records. Some of those utilities were installed as early as the 1930s and are still in service, he said.

“We tried to find things that would have prevented us from being efficient when we installed the storm drain and tried to get it all worked out on paper beforehand, instead of just sending equipment down there trying to install [the stormwater system],” Doster said.

Now, the next step is to redesign around, below and above certain utilities and coordinate with the utility companies, which the county has already begun to do. The companies are ensuring all their lines are properly mapped, he said. The county has also begun to redesign some of the storm drain to go around certain utilities, especially those that are going to be more difficult for utility companies to relocate. “But everytime we move it, something else gets in the way,” Doster said.

The ultimate goal of this phase of the project is to bring the county’s and private companies’ utilities up to today’s standards and complete the installation of the stormwater system to improve the water collection underneath Clayton, which will prevent water (and beer) from pooling on and beneath the sidewalk.

Aside from the stormwater system, crews will soon start working on the streetscape portion of the plan, since the commission voted to approve the preliminary plans for that stage earlier this month. Improvements will include new, wider sidewalks, new paving, storm drainage, pedestrian safety improvements, better traffic flow and bicycle improvements. The number of traffic-signal poles will be cut in half, from 10 to five, to clear the way for pedestrians. According to plans approved by the commission on Feb. 5, Clayton’s much-needed facelift will also include street lighting, trees, more plants and amenities like benches and bike racks.

“I’m excited about this… how we’re going to widen the sidewalks to make more room for pedestrians and sidewalk activities,” said Commissioner Mike Hamby. “At the end of the day, it’s going to make downtown look better, and hopefully will be a big benefit for the businesses and the residents of Athens.”

Commissioner Melissa Link called the project “terrifyingly overdue.” It’s been on the books since 2004, when voters approved it as part of a sales-tax package. But when it was finally put out for bid in 2015, inflation and a construction boom meant that bids came in far too high. The original $7 million budget was supplemented with another $7 million from a 2017 transportation sales tax.

Link also emphasized the need for a lively and inviting streetscape downtown. “This is the heart of our downtown,” she said. “Our downtown is our economic and cultural core. Our downtown is the living room of our city.”

In September, the Athens Downtown Development Authority surveyed business and property owners along the Clayton Street corridor and adjacent streets about what they want the new streetscape to look like. The survey asked about alleyways, benches, crosswalks, sidewalks, lighting, banners, cafe space, planters, a pedestrian mall and wayfinding signs. Each category included five options, varying from traditional to modern.

The result: “Folks don’t want a cookie-cutter street,” said David Lynn, the ADDA director of planning and outreach. Lynn said that a majority in some categories, such as lighting, wanted a modern and unique streetscape, rather than traditional. “They’re interested in some different ideas,” he said.

Officials have not finalized the type of trees that will replace the aging and unsalvageable ginkgos and Darlington oaks on Clayton, said ACC Landscape Administrator Jeanne Connell, but options include Avalyn oaks, Biloxi crepe myrtles, Winter King hawthorns, October Glory red maples and Chinese ironwoods. Connell said those trees are all shade trees, varying in size and canopy, that were selected for their longevity and health. Ultimately, she said, the selection will depend on the availability of a certain tree at tree farms.