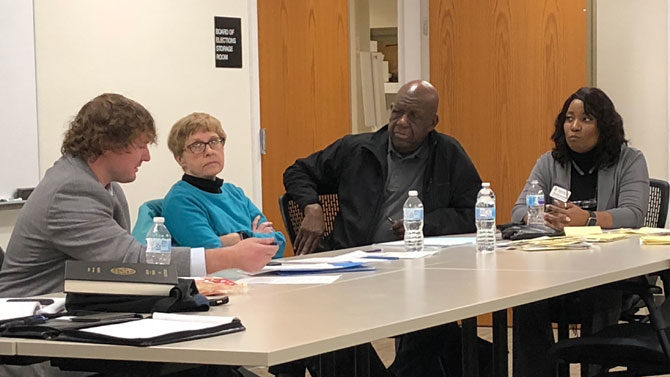 Jesse Evans (left) and Charles Knapper (right) at a November 2018 Board of Elections meeting. Credit: Blake Aued/file
by blakeauedandashlynwebb November 21, 2018

In any other year, it would have been a mere formality. But an Athens-Clarke County Board of Elections meeting on Nov. 12 to certify the county’s vote led to a harried recount that found further problems with absentee ballots and forced the county to miss its deadline, potentially inviting sanctions from the state.

Less than 24 hours before the deadline at 5 p.m. Nov. 13 to deliver the final vote tally to Atlanta, newly appointed board member Jesse Evans submitted petitions to conduct a “recanvassing” in eight out of 24 precincts: Howard B. Stroud, Clarke Central, Lay Park, the multimodal center, Whitehead Road (which includes both 5A and 5B), Chase Street and Cedar Shoals. Under state law, three voters in a precinct can submit a notarized request to trigger a “recanvassing”—essentially a recount, followed by testing of voting machines—if they believe there is a discrepancy. Commissioners Melissa Link and Mariah Parker and Commissioner-elect Tim Denson worked with voters in their districts to submit the petitions, according to Link.

“This is all news to me,” ACC Attorney Bill Berryman said when he learned about the petitions. He asked for and received an hourlong recess to research this issue. When he returned, he advised the board that it faced a choice between violating two state laws that conflicted in this case.

“Basically, what I am describing here is a very, very tight timeframe,” Berryman said. “This came at a very, very late date, and there’s been very little time to assess it… I think it is up to the board to decide if it’s reasonably possible to conduct the recanvassing.”

After a contentious two-hour discussion that included the threat of a lawsuit by local lawyer Ryan Heron, who told the board to “do your damn jobs” before walking out, the board voted to conduct the recanvassing, provided it was finished by 2 p.m., when the board would lose its quorum because two of the five members would be out of town and a third was only available mid-day.

The recanvassing came against the backdrop of widespread suspicion among Democrats about the outcome of the gubernatorial race, given that Republican Brian Kemp oversaw the election as secretary of state while running for governor, as well reports of long lines and mishandled ballots that prompted Democrat Stacey Abrams to file multiple lawsuits.

Evans’ motion to conduct the recanvassing at first died for a lack of a second, but after expressing concern about the tight timeline, going against the board’s attorney’s advice and further doubt that a thrown-together plan for recanvassing could cast on the results, Democratic appointee Michele Simpson eventually agreed to it, provided that the results were certified before the deadline.

“You’re trying to do something on the fly,” Berryman said. “Are you making that process more vulnerable than it was before?”

Evans dismissed those concerns. “This is about us not trampling on the civil rights of the voters in this community,” he said.

Two board members, Republican appointee Walter Wilson and Alison McCullick—who was appointed, along with Evans and chairman Charles Knapper, by the ACC Mayor and Commission—were absent from the Nov. 12 meeting. Wilson was out of the state, and McCullick recently had a death in the family. In addition, Simpson had to be out of town the following day. McCullick told Simpson that she could attend the recanvassing from 10:45 a.m.–2 p.m. on Nov. 13.

To conduct the recanvassing, Director of Elections and Voter Registration Charlotte Sosebee had to bring in poll workers from each of the eight precincts, as well as contact the parties and all the candidates on the ballot so they could attend or send representatives.

The recanvassing started at 11 a.m., and the board wound up blowing past its deadline by several hours. The Georgia State Patrol delivered certified results to the secretary of state’s office in Atlanta the morning of Nov. 14, making Clarke one of the last counties to certify.

Not only were all the votes counted on Election Day, the recanvassing revealed that too many were counted. While no machine-cast votes changed, 25 absentee ballots disappeared in the eight contested precincts. That number grew to 54 when the Secretary of State’s office informed ACC it couldn’t do a partial recount and had to count the votes from Athens’ other 16 precincts again, too.

It appeared that some ballots were run through a scanner more than once on election night, McCullick said. Sosebee told Flagpole earlier that there was a problem with some of the 3,047 paper ballots not scanning properly that forced election workers to duplicate and rescan 333 ballots.

Evans refused to sign off on the recounted results, which he said he was not shown before being asked to certify that the results were true and complete, and there were differing accounts of how the initial count and the recount differed. “This is about accuracy to me,” he said. “If someone casts a vote, it should count.”

Throughout the process, Evans butted heads with Berryman, Sosebee and Knapper. “I’m just trying to make sure this is done right. Now, they’re making me the bad guy. I was alone in there,” Evans said.

Berryman warned him that he might face a state inquiry into why he didn’t sign off on certifying the vote. And he and Sosebee argued about the importance of meeting the deadline to certify. ACC could face a hearing before the State Elections Board, a fine and even a lawsuit from the state attorney general’s office, she said.

“I’m trying to get you to understand that [certifying on time] will keep us out of court. What you’ve been talking about we can deal with, but we’ve got to keep our butts out of court,” Sosebee told Evans.

The situation inflamed passions to the point that the ACC government posted a lengthy recap and explanation on its website late Friday. Evans also wrote a long email to the State Elections Board on Friday asking it to investigate, and copied ACC commissioners.

Moving forward, the board agreed it needs a plan to address and count absentee ballots. “It points directly to how absentee votes are counted on election night. Our strongest poll workers need to be working there,” McCullick said.

As for provisional ballots, the board approved 41 and rejected 163—140 because those voters were registered in a different county, 13 who were not registered, five who’d been purged because they hadn’t voted in the previous two general elections, two didn’t return with ID, two were felons and one who couldn’t be identified. Fifteen are pending the outcome of a Democratic Party of Georgia lawsuit.

The final results on the secretary of state’s website show 43,450 ballots cast in Clarke County, with Abrams winning 70.27 percent of the vote, Kemp 28.56 percent and Libertarian Ted Metz 1.18 percent. Statewide, Abrams fell about 20,000 votes short of forcing a recount or runoff.

Abrams announced Friday that she would end her efforts to contest the governor’s race in court and form a new voting-rights group that would sue the state over its election practices.