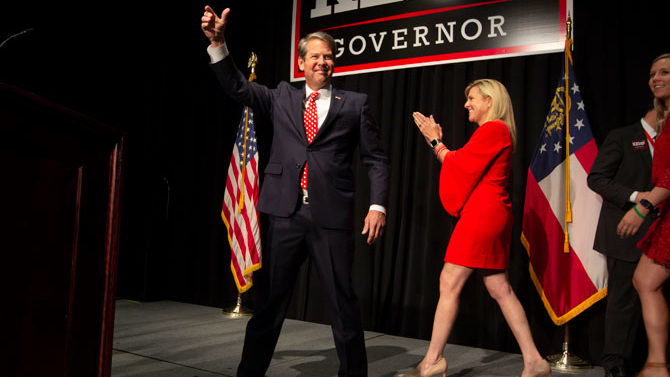 Half of liberal Athens will once again be represented by Republicans in the state House of Representatives come January, as Republicans ousted the two Democrats who claimed the GOP-leaning seats in a special election last year.

In House District 117, Houston Gaines defeated Rep. Deborah Gonzalez (D-Athens) in a rematch of the 2017 race by a 54 percent to 46 percent margin. In House District 119, Rep. Jonathan Wallace (D-Watkinsville) lost to Marcus Wiedower—one of three Republicans who ran against him last November—by six points.

“We’re expecting a victory. We’re expecting a blue wave. People have been so motivated, so excited. We just want it to continue,” Gonzalez said a couple hours after polls closed as supporters danced at Little Kings Shuffle Club.

Flagpole contributor and retired journalism professor Lee Becker crunched the numbers on his blog, Oconee County Observations, and found that Republicans won this time around because turnout in Oconee dwarfed turnout in Clarke. Both counties turned out about equally in 2017, but this year, turnout was 75 percent of registered voters in Oconee and just 62 percent in Clarke. (Long lines may have had something to do with the relatively low turnout in Clarke. See here for more on local election problems, which included 3,000 absentee ballots remaining uncounted until noon the next day, leaving the outcome of both House races in question all night.)

Gaines, who ran Mayor Nancy Denson’s re-election campaign in 2014 as a college freshman, also apparently benefited from Denson’s support, as there was a significant Democratic undervote for Gonzalez. She won just 62 percent of the vote in Clarke County, compared to 70 percent for Wallace. That figure was the lowest of any Democrat on the ticket. Wiedower and Gaines also spent twice as much money on their campaigns as Wallace and Gonzalez.

At press time, the governor’s race remained undecided. At the Classic Center, where Athens native Kemp held his election-night party, some supporters stuck it out until 3 a.m. to hear Kemp kinda-sorta declare victory with what was then a 90,000-vote lead over Abrams. “There are votes left to count, but we have a very strong lead,” Kemp said. “We are waiting on the final results, but I am confident that victory is near.”

The gap narrowed overnight and Wednesday as the last votes were counted, but not enough to push Abrams into a runoff. Still, the race may not be over. Legal action seemed imminent, and anything more Flagpole writes on this subject is likely to be outdated by the time the issue hits racks.

Regardless, there will be a runoff in December—and it will feature another Athens native, John Barrow. A Libertarian spoiler forced a Dec. 4 runoff between Barrow and Republican Brad Raffensperger in the secretary of state race. In addition, Republican Public Service Commissioner Tricia Pridemore will once again face Democrat Dawn Randolph in Round 2.