Bus Routes, Construction, New Shops and More—All the Changes at UGA This Fall 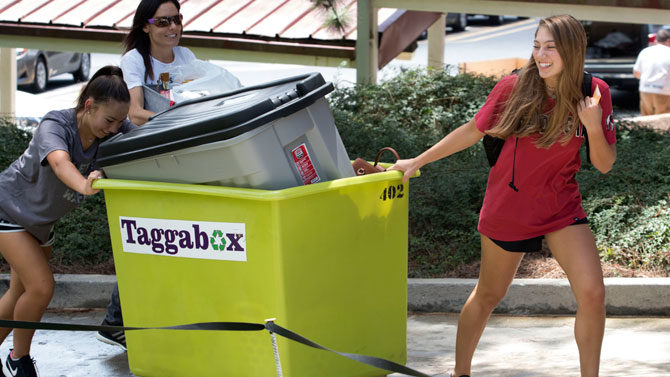 School is back in session at the University of Georgia next week, and students have already started moving in. Here are some additions, upgrades and other changes those who’ve been gone for the summer may notice on campus.

One Stop Shop: Back to school is stressful as-is for college students. In addition to figuring out class schedules and paying tuition, students have to map out the notoriously complicated bus routes, select a meal plan and purchase a parking permit. But now, UGA has a new spot in the center of campus where students can take care of all of those back-to-school musts and save some of the stressing for finals.

In June, UGA’s Auxiliary Services opened its “One Stop Shop,” located in Tate Plaza next to the UGA Bookstore and behind the ATMs. A few of the new shop’s services include visitor information, meal plan sign-ups, Bulldog Bucks depositing, license plate recognition permit registration, bus route information and citation payments. The location also has experts from UGA’s Dining Services and Transportation and Parking Services on site.

College Station Park and Ride: Beginning this fall, UGA Transportation and Parking Services is offering a lower-cost option for parking with its new park-and-ride lot just off the Loop on College Station Road.

The lot will allow students, faculty and staff to park and be bused to campus by UGA transportation, said Greg Trevor, the executive director of media communications at UGA. This semester, 150 parking spaces are available. However, Trevor said the lot can be expanded in the future if there’s a high demand.

The lot will be $10 per month—half the price of the current lowest parking fee. Other permits range from $20–$40 per month, depending on the convenience of the lot’s location. The new lot was also designed to reduce traffic congestion as part of the university’s focus on “traffic demand management, parking and access to and around campus,” Trevor said in a statement.

In addition to the new lot, UGA Transportation and Parking Services and Student Government Association is testing technology to “communicate real-time parking availability,” Trevor said. When completed, patrons will be able to check the number of available parking spaces through the UGA app or the Transportation and Parking Services website. The technology is currently being tested at the Tate Student Center Deck.

Russell Hall and More Construction: After a $44.5 million facelift to the Baxter Street dorm, opened in 1967, Russell Hall welcomed nearly 1,000 students Sunday, Aug. 5. The revamped Russell Hall provides more private dorm rooms and community bathrooms while also featuring larger, inviting community spaces for gatherings and study. “The common spaces in the building are intentionally designed for students to gather in groups or to find spaces for individual study,” Trevor said.

The new residence hall also features the Russell Academic Center, which includes the Russell Market (a convenience store open until 2 a.m.) and an outside patio.

In the dorm rooms, UGA Housing ditched the built-in metal furniture that was previously in the residence hall for new moveable loft beds, desks, dressers, drawers and other furniture. In addition, the floors were replaced with vinyl that has the appearance of hardwood.

The third and last phase of the Business Learning Center near Lumpkin and Baxter streets will add two buildings to the Terry College of Business. The buildings will house roughly 10 additional classrooms, staff offices and conference rooms, according to Terry’s website.

“The Business Learning Community is transforming the Terry College of Business by creating a new learning environment that was not available to business students before the BLC and its abundant common space opened,” Trevor said. “It’s now a place where business students can gather, study, work on projects, interact with faculty inside and outside the classroom and network with alumni and employers.”

This portion of the project and Phase II were funded by a public-private partnership between the state of Georgia and private donors. Correll Hall, the first phase of the project that opened in 2015, was funded solely by private contributions. Once finished, the six-year project will be one of the largest capital projects in the University System’s history at $140 million.

In addition, the first floor of the Main Library has been renovated to accommodate a Caribou Coffee and Einstein Bros. Bagels. “Students have adopted other parts of the Main Library for very quiet study, but were crowding into our rather small cafe for group work,” Toby Graham, university librarian and associate provost, told The Red & Black. “This project helps us to achieve a better mix of study environments, giving additional room and an intentionally designed space for student collaboration.”

The UGA Athletic Association will soon wrap up a $63 million expansion of Sanford Stadium. The project includes a new home locker room, recruitment facilities, restrooms, concession stands, video board and a plaza connecting the west-end seats directly to the Sanford Drive bridge.

In December, construction will begin on the new Interdisciplinary STEM Research Building. The building will be used solely as a research facility and will give undergraduate and graduate students the opportunity to work closely with researchers in the labs. “The building will expand laboratories for chemistry, engineering and other material scientists, enable innovative interdisciplinary research, and house existing faculty across disciplines,” Trevor said.

Campus Transit has changed the Health Sciences bus route effective Monday, Aug. 13. Rather than run all the way down Prince Avenue to downtown on its way to the main campus, buses will turn down Milledge Avenue, stopping at the Lucy Cobb Institute, Clarke Central High School, Springdale Street and Oakland Avenue. They will then turn onto Rutherford, then Lumpkin Street and resume the former route at Snelling Dining Commons. Rather than stopping on demand, the number of stops on Prince Avenue has been limited to three: Piedmont Athens Regional, the President’s House at the corner of Prince and Grady Avenue, and the Delta Tau Delta fraternity at the corner of Prince and Nacoochee Avenue.