Can a Democrat Flip District 119, or Will It Stay in GOP Hands? 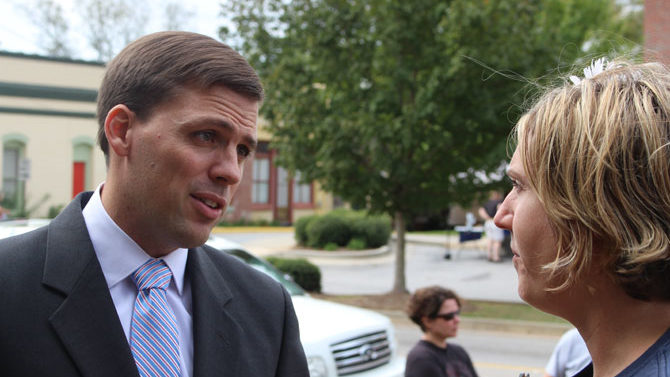 It almost sounds like a joke: A mortician, a telecommunications business director, a homebuilder and a software engineer walk into District 119, and one of them hopes to leave as the new state House representative.

Republicans Tom Lord, Steven Strickland, Marcus Wiedower and Democrat Jonathan Wallace are all running to fill Chuck Williams’ vacant seat under the Gold Dome in Atlanta in the upcoming Nov. 7 special election. Williams held the seat since 2011 and was unopposed in 2012, 2014 and 2016, but stepped down in August after being appointed as director of the Georgia Forestry Commission by Gov. Nathan Deal. It’s the lower profile of two House races in Athens—Deborah Gonzalez versus Houston Gaines in District 117 has drawn more attention—but equally vital.

The district is split about 50-50 between Clarke and Oconee but leans Republican—a fact some of the Republican candidates are hedging their bets on. With a transportation sales tax also on the ballot in Clarke County, Wallace—the Democrat—and his supporters are hoping for a strong showing from Clarke County residents.

“I think we have a real chance to see this district flip,” Wallace said in an interview with Flagpole. “Trump only won our district by six points, and he’s not very popular right now.”

Strickland agrees that Democrats have a shot. “I crunched the numbers. It’s much closer than you think,” he said. “It’s tilted in Republican favor, but it’s not like a 70-30 split like most people think.”

As for the issues in the race, all four candidates are building their campaigns around the same set of topics—mainly education, transportation and infrastructure.

Lord, owner of Lord and Stephens Funeral Homes in Clarke and Oconee counties and a self-identified conservative Republican, is the established resident, being born here and raising his 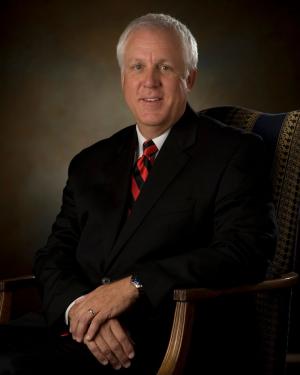 family here over the past four decades. Lord is the only candidate among the four who has previously held office, serving three terms as coroner in the 1980s and ’90s. That experience, however, Lord joked, does not transfer over to the current race. “That was a long time ago,” he said. “I was a young man.”

Lord said his experience at the funeral home has prepared him to be a state representative.

“In this business, I listen to and respond to the needs of families that I serve,” he said. “And I serve everybody. I serve people from every social status, nationality, and I can relate to everyone that I sit down with. As a representative, it’s no different.”

Lord was the first person to announce his candidacy in the special election after he said several businesspeople in the district approached him about running for the position. “This is a full-time commitment, and I’m at that stage in my life to where I could devote the amount of time to serve the people of this district effectively,” he said, noting that his children are grown and his business is set up with good staff.

Over his years in the area, Lord said he has noticed incredible growth. “When I came back to Athens after college 40 years ago, Oconee County was still a very rural area, and you see what it is now,” he said. The downside to that growth, he said, is traffic. In response, Lord is basing his campaign around transportation improvements, specifically Highway 316. “I think the state needs to invest dollars to make improvements so we can alleviate the traffic backups that get worse every year,” he said.

Wiedower has also called for improvements to 316, arguing that the road should have been a limited access road from the beginning. “We don’t need to be a donor community to Atlanta transportation projects,” he said. “We need a champion for that, to make sure we’re not funding projects that don’t come back here.”

Strickland did not mention 316 specifically in his interview with Flagpole, but did discuss the problem with a “lack of robust infrastructure,” including roads and rail systems, and proposed a “10-year strategic plan in place to address these transportation issues.”

Wallace, while not disagreeing with the other candidates, pointed out that such a plan was already in place. In 2015, the state approved a gas-tax bill that is raising $1 billion for road projects over a decade. The state route was later designated as a freight corridor in hopes of expediting improvements. The road is beginning to become a limited access road, starting with Gwinnett County, where 316 meets Interstate 85, and in coming years freeway-style interchanges are slated to be built in Barrow and Oconee counties, as well. “So what they’re complaining about is already in progress,” Wallace said. “I do understand where they’re coming from, but plans are in place to fix that.” 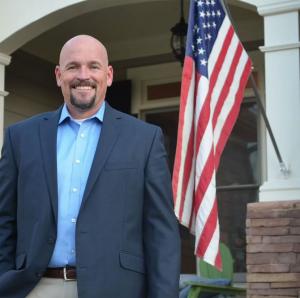 Like Lord, Wiedower also has long-term investment in Oconee County, coming to the area to attend the University of Georgia and never leaving. Wiedower graduated from UGA with a degree in landscape architecture, and now works building custom homes. “My joke is that I only spend 25 percent of the time actually building the house; the other 75 percent of the time I’m a marriage counselor for the couple I’m building for,” he said.

Wiedower—who lost a county commission race last year—also served on the PTO board at High Shoals Elementary, the River Club of Oconee and the Oconee GOP until he decided to run for state representative. “My grandparents would joke, ‘You’re going to be the mayor of Athens,’ because I just love people, I love talking to people,” he said.

In addition to promising not to raise taxes, education is at the forefront of Wiedower’s campaign, pushing for improvement in local schools. “I know Clarke County has done amazing things with their schools, and I want to make sure they’re funded just as much as Oconee County,” he said. “Oconee has great accolades, but there are kids who slip through the cracks there too, and I want to make sure that all those people are served.”

Wiedower also wants to ensure the University of Georgia, “the economic driver of our community,” is funded appropriately. He is also advocating for people with learning disabilities, looking to push legislation that recognizes dyslexia as a learning disability.

Strickland also mentioned addressing education needs, promoting Individualized Education Programs for students with special needs. He also called for more investment into rural schools and communities, as well as modernizing education curriculum “not just in how it’s delivered, but what it delivers.” Strickland suggests taking advantage of a “booming charter school program” and online classes, and restructuring curriculums to teach computational skills, as well as training programs for unemployed adults. “Just like you would study chemistry or physics in high school, they need to start studying data science,” he said.

Both Wallace and Lord (unlike most Republicans) said they disapproved of the state’s attempted takeover of “failing” schools at the ballot box last year, preferring to maintain local control of schools. Wallace also argues against high-stakes testing, which he said eats into already-shortened school semesters. 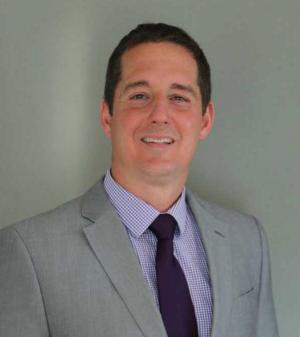 Compared to the other two Republicans, Strickland is the newcomer, coming to Oconee County five years ago because of the school system for his children. Strickland served in the military briefly out of high school, then went on to earn a business degree from Oglethorpe University, a master’s degree in management from Georgia Tech and, recently, a law degree from UGA in May. Professionally, Strickland has worked in telecommunications most of his career, at AT&T and NCR, a computer and electronics solutions company. He is currently the director of corporate business development at Gibson Technical Services.

Strickland said he had originally planned on challenging Williams in 2018, and decided to enter the race when the special election was called. When he first announced his candidacy, he toyed with the idea of running as an independent. “I wanted to so people on the other side of the equation, whether it’s on fiscal policy or social issues, could feel like they could initially come out and talk to me,” he said.

Given his background in telecommunications, Strickland’s campaign largely revolves around expanding technical infrastructure, from broadband internet for rural students to smart roads that ease congestion and manage traffic. “We are marching toward more and more devices and machines relying on connectivity, and you have to have a system in place that can support the demands,” he said.

Wallace is the sole Democrat in the race, having decided to run only a few weeks ago. Wallace originally grew up on the Gulf Coast, where his father ran shrimp boats and his mother cleaned bars. Much like Wiedower, he graduated from UGA 17 years ago with a degree in software development and decided to stay and raise a family in Oconee County. Wallace serves on the board of directors for Four Athens, a startup incubator in Clarke County, working to secure a strong tech industry in the area. The job, Wallace said, has taught him how to connect people and make them successful, a skill he hopes to take to the state capitol.

Similarly to Strickland, Wallace discussed the effects automation and computers will have on industry, and plans to address it and other technical shortcomings such as broadband access for rural students. “With a tech background, I was frustrated with the data breach at Kennesaw State University that exposed voter rolls,” he said. Wallace said he would work to get on the science and technology committee to push for new voting machines, noting how the current ones can easily be hacked.

Wallace also wants to reduce auto insurance rates by undoing a 2008 law that effectively tied the hands of the Georgia insurance commissioner, and to expand Medicaid. “The things we should be doing here in our state are not only good economically, they’re also good for people,” he said, adding that he thinks Gov. Deal’s rejection of Medicaid expansion left “eight or nine UGA football stadiums of people without health insurance” to score political points.

Wallace’s first legislation in office, however, would be for an independent redistricting committee for the 2020 election. Republicans have redrawn Athens districts three times since 2004 to give the GOP an advantage in the heavily blue county.

On one hot-button issue, campus carry, the three Republican candidates, predictably, were in favor of the idea, while Wallace was not. Lord has a daughter at UGA, and said he likes knowing she can defend herself if needed. Strickland said he wasn’t entirely onboard with how the law is written now, calling it a “science experiment for those who want to carry,” given all its exceptions, and he is willing to “push the envelope” on the issue if district residents want him to. Wallace pointed out how Republicans are often on the side of local control, yet university presidents and police chiefs who spoke out against the law are being made to enforce the law by the state government.

Since it is a special election, all four candidates will appear on the same ballot. Given the district’s demographics and the number of candidates running, it’s likely that Wallace will face one of the three Republicans in a runoff Dec. 5.