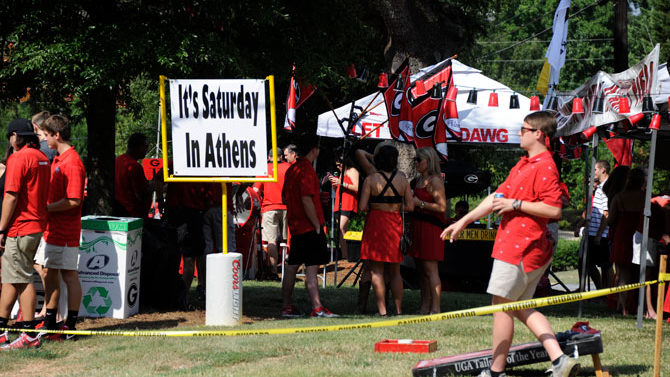 After Georgia’s campus carry law went into effect in July, students and campus visitors are now allowed to carry concealed firearms at most places on campus, with exclusions specifically for residence halls, Greek houses, staff and administrative offices and athletic venues such as Sanford Stadium. But while weapons cannot be taken inside the stadium on game days, those celebrating Saturdays in Athens at tailgates outside the stadium and all across campus are allowed to arm themselves.

Just because they can, though, doesn’t mean they are.

Flagpole spoke with tailgaters during the Appalachian State and Mississippi State football games, and while some supported the ability to carry handguns on college campuses, none of them were taking advantage of the new law.

“I don’t feel the need to have it on me,” said Charles Ashfield, a concealed-carry permit holder tailgating outside the Myers Quad before the App State game. Instead, Ashfield left his pistol in his vehicle. “With [the shootings in the news] going on, I might have to bring it eventually, but until something happens, I don’t see a real need to,” he said.

Despite lauding the right to bear arms, many campus carry supporters actually advocated against people carrying guns while tailgating. “People should exercise their Second Amendment right, but people should absolutely not be carrying out here,” said Chris Landers of Jefferson, noting the large crowd on the Myers Quad before the App State game.

Landers and other permit holders said drinking was a big reason why they were not carrying. Under Georgia law, it is illegal to discharge a firearm while under the influence of alcohol or drugs. “Most people that have a carry license are not going to carry if they are drinking,” said Audra Bleecker of Atlanta.

Still, Bleecker is concerned about being on a campus where concealed carry is allowed, “especially in a situation like this when people are drinking and there are rivalries and what all.”

“People get to eating and drinking, they could shoot up the whole campus,” Ashfield said.

“Not being able to carry while you drink is a good thing,” said Andrew Herrington, a Mississippi State fan from Austin, TX.

Landers emphasized that he carries only to protect his family, and wouldn’t get involved in a situation on campus unless he needed to. “I won’t ever use my gun to protect someone else,” he said. “There are too many crazy lawsuits.”

In a memo in May, the University System of Georgia noted that gun storage facilities will not be provided on campuses, meaning those carrying would have to find somewhere to store their gun before entering the stadium. Between that and the law regarding drinking and carrying, many felt it was easier to just leave their guns in their cars.

Some didn’t feel like tailgating was a situation where they would ever need to defend themselves. Bill Hallman of Conyers, a 24-year Navy veteran, supports students’ ability to defend themselves on campus during classes and at night, but left his gun in his car while tailgating before the Mississippi State game. “We carry guns, but we don’t feel like we need to come to a site like this and need a gun,” he said. “I don’t feel threatened here. There’s 93,000 people, why do you need a gun to protect yourself?”

Herrington flew in from Texas for the Mississippi State game and decided to leave his gun at home rather than worry about the hassle at the airport. Had he driven, he said he probably would have brought it and left it in his hotel room. “I don’t feel that endangered,” he said. “I feel perfectly fine here.”

Several Mississippi State fans said they’re not used to not bringing guns on college campuses, since their alma mater does not allow concealed carry on campus. “Really, guns shouldn’t be involved on campus,” said Carson, who declined to give his last name. “That law was a bit ridiculous.”

UGA spokesman Greg Trevor said police patrol campus during football games, and there have been no incidents related to the new law, though the university would not discuss the specifics of its security practices. “License holders who choose to carry handguns on campus are expected to know and comply with the law,” Trevor said in a statement.

So far, it seems as though they have.

“I don’t have a problem with campus carry,” Hallman said. “Follow the guidelines, only take them into the spaces where you’re allowed.”

Six Georgia professors—including three from UGA—filed a lawsuit in Fulton County last month alleging that campus carry is endangering students and faculty, and stifling classroom debate. The lawsuit argues that Gov. Nathan Deal and the state legislature usurped the Board of Regents’ authority to set policies for public colleges and universities, and seeks to have the law declared unconstitutional.

However, Shane McAdams of Athens said he hasn’t seen a difference since the law took effect. “I don’t think it actually changed anything,” he said. “Every person that was carrying a gun last year is carrying a gun this year. It didn’t change a damn thing.”