Athens Breweries Can Sell Beer Directly to You Starting in September 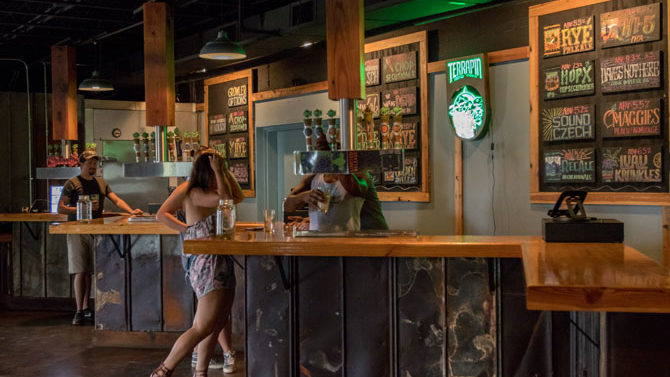 Visiting a brewery in Athens can be a fun but slightly miserable experience—fun because of beer and socializing, of course, but the misery comes with the long lines. Visitors must stand in line to show ID and pay for a tour, receive their drink tickets or bracelet, then stand in line again to receive a “free sample” of the brewery’s product. Once the visitor hits 36 ounces of samples, they’re cut off, and after that it’s up to them to find a retailer to buy beer to take home.

Unlike counterparts in other states, breweries in Georgia must sell their products through a three-tiered system set up after Prohibition—they sell to distributors, who sell to retailers, who sell to consumers. A six-pack of Tropicalia on a local shelf must first be shipped away, then driven right back to Athens.

“Breweries value their wholesalers and the service they provide,” says Owen Ogletree, an Athens beer writer and organizer of the Classic City Brew Fest, “but the main problem with Georgia’s law was that a brewery could not have a taproom or offer sales of packaged beer to go. This puts Georgia’s breweries at a severe disadvantage, compared to breweries in other states. Tasting beer at a Georgia brewery has to be free, limited and based around a paid tour.”

Breweries have been asking to change the law for years. Last spring, the state legislature passed and Gov. Nathan Deal signed Senate Bill 85, authored by Sen. Rick Jeffares (R-McDonough). On Sept. 1, malt beverage producers across the state will be able to sell directly to consumers right on the premises. This means the end of the convoluted tour system where breweries essentially give away free beer to people who bought an overpriced glass. Consumers will now be able to walk right up to the bar in the taproom, purchase a pint and drink it, or buy up to a case to take home. Taproom culture will feel less like a boozy cattle drive and more like visiting a bar.

Local patrons can expect some changes in their brewery experience—for the better, according to every local brewer. “The main [change] will simply be how they go about paying for that, in that it is a bit more of a ‘pick your path’ type of experience,” says Creature Comforts CEO Chris Herron. “People can choose how they want to engage with our brewery in a new way—[they can] sample a lot of different beers, or sit and have just one beer that is their favorite.”

Creature Comforts is converting the entrance to its Hancock Street location into a merchandise shop, since customers will no longer have to buy a tour to enter. Terrapin recently remodeled its taproom and gave the outdoor tasting area more of a “beer garden” feel. With a new roof over the outdoor taps and a new tent for the picnic tables, consumers will be able to circumvent the front door and go through the outside gate and straight to the taps.

“You’ll be able to hang out at the brewery longer, because you’re not capped at how much beer you can have,” Kuck says. “Or you can just stop in and have a pint, and then take home a whole case. It’ll feel more like a place to hang out. You’re not limited anymore.”

All of the local breweries will still offer tours, though they won’t be the primary onsite moneymaker anymore. “They can expect an incredible experience where they can sample world-class beer and learn about our brewery and our brewing process,” Herron says.

Both Creature Comforts and Southern Brewing Co. are refreshing their staff’s training on spotting fake identification and addressing patrons who have been overserved. At SBC—Athens’ youngest brewery—staff is provided suggestions on the best ways to cut someone off, and they’ve hired more servers as well. “We went ahead and hired staff leading up to [Sept. 1]” says SBC co-founder Rick Goddard. “We’re gonna be able to hire more staff and purchase more business. It’s gonna mean a lot for a small business like us.”

Kuck has similar hopes. “Hopefully [SB 85] will mean a lot of growth in our tasting room, and we’ll have to hire more people,” she says. “We would love that.”

Look forward to actual menus at breweries as well, with Terrapin adding tasting flights as an option on Sept. 1, and Creature Comforts offering three sizes of pours—five, 10 and 16 ounces.

The options are limitless when one thinks of taproom culture in California and Colorado, as Ogletree does. SB 85 gives Athens taprooms the potential to grow into the tourist hubs and moneymakers that they’ve become in other states.

“Consumers come [to taprooms] on a regular basis to taste the beer, socialize and see what’s new,” Ogletree says. “Because of tours, on-site restaurants, brewery exhibits, etc., taprooms and visitor centers are true tourist destinations that bring in loads of local revenue from visitors.”