After Charlottesville, Athens Grapples With Its Own History of Hate

After thousands of white nationalists, neo-Nazis, white supremacists and other racists sparked a deadly riot in Charlottesville, VA earlier this month, Athens residents are trying to come to grips with this city’s own Ku Klux Klan heritage and discussing a push to remove the Confederate memorial on Broad Street downtown.

People gathered the Sunday following the strife at the Arch to express solidarity with the citizens of Charlottesville, and a previously planned rally to support immigrants’ rights Aug. 15 morphed into a candlelight vigil, as well. Hundreds of Athenians also packed into the auditorium at the Athens-Clarke County Library for an Athens Anti-Discrimination Movement program about the city’s history of discrimination.

“To see that happen in 2017 after so many years of fighting, it’s just heartbreaking to see that that kind of anger and hate still exists,” AADM co-founder Mokah Johnson said.

When she asked audience members how Athens can prepare and prevent the events of Charlottesville from happening here, many were quick to throw out suggestions, including denying rally permits or restricting guns and hate symbols. Others questioned the constitutionality of limiting free speech and weapons laws, while some preached the importance of nonviolence and strength in numbers.

“I think Charlottesville was caught off-guard,” one audience member said. “We need organization and some kind of online effort to bring the community together and [be] prepared.”

While Athens is known as a progressive town, it has its own history with racism and the Ku Klux Klan in particular that has largely been forgotten.

During his research into the Southern Mill renovation project in the Happy Top neighborhood north of Boulevard, Michael Smith said he learned that in the 1920s, the Klan often dragged people out of their houses and beat them. Digging some more, he said he discovered that the Klan had effectively taken over the local government in the 1920s.

“It started a nationwide purity campaign, marketed out of Clarke and based in Atlanta,” he said. The Klan had reinvented itself, he said, targeting mainly Puerto Ricans and Jews in the big cities and African Americans in the country. “By 1922, they had private patrols all over Athens,” he said. “The police and the government [were] working with them and trying to stop them at the same time.”

Smith said community leaders like William Bryan, the founder of Southern Mill, and Andrew Cobb Erwin, the mayor of Athens from 1918–1921, promoted equality in the community. In response, the Klan organized the purity campaign at a church near where White Tiger is now. The beatings in Happy Top, Smith said, were in response to an anti-KKK pledge that many Athens residents had taken.

In 1924, Erwin spoke at the Democratic National Convention in New York as a delegate from Georgia. In his speech, Edwin denounced the Klan, with reportedly 5,000 Klansmen in the audience and another 20,000 across the river “locked and loaded,” Smith said. 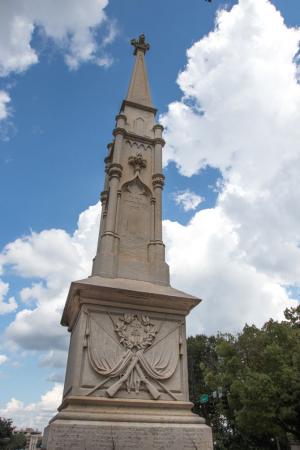 Milton Leathers, Erwin’s grandson and a local historian, took the stage to read his grandfather’s speech, drawing parallels to current events and highlighting the history of Athenians standing up to the Klan. “To see us veer off like this—that America isn’t for everybody—almost 100 years later, my grandfather just wouldn’t be able to believe what has happened in Charlottesville,” Leathers said.

The Klan was active in Athens at least through the ’60s. In 1964, Athens Klansmen followed Army officer Lemuel Penn to a Madison County bridge, where one shot him to death. Around the same time, KKK members threatened one of UGA’s first two black students, Hamilton Holmes, and marched in opposition to civil rights activists trying to integrate The Varsity.

Johnson and her husband, Knowa, started the AADM in response to a racist drink name at General Beauregard’s, the Old South-themed downtown bar, but its mission has expanded. “It’s not just the college students,” Mokah Johnson said. “The natives have been experiencing it for a long time.”

The crowd at the meeting was overwhelmingly white, which bothered some attendees. “This happens every time I go to one of these events,” said Jesse Evans, a teacher and Athens for Everyone board member. “This is not representative of the community.”

Johnson told Flagpole she felt the white crowd was a good thing. African Americans preaching to the choir about discrimination has no benefit, and “we feel like people don’t believe us,” she said. “It’s that many white people that want change, that want to see change in the community,” she said.

Another topic was removing the stone obelisk on Broad Street constructed in 1872 and dedicated to Confederate soldiers from Athens who died in the Civil War. It will be difficult to do anything about the memorial, legally. Russell Edwards, an Athens lawyer, researched the law regarding Confederate monuments in Georgia, and found the monument cannot be “relocated, removed, concealed, obscured or altered in any fashion… provided, however, that appropriate measures for the preservation, protection and interpretation of such monuments or memorials shall not be prohibited.” The state legislature passed the law in 2001 as part of a compromise to remove a Confederate symbol from the Georgia flag.

Moving the statue to Oconee Hill Cemetery or a similar location would likely comply with the law, Edwards said, although the audience seemed hesitant about the idea. Some proposed leaving the monument in its current location but erecting another monument beside it to remember the slaves. “This monument expresses grief and loss, and if it stands, it should express grief for the many losses in African-American lives during that time,” one audience member said.