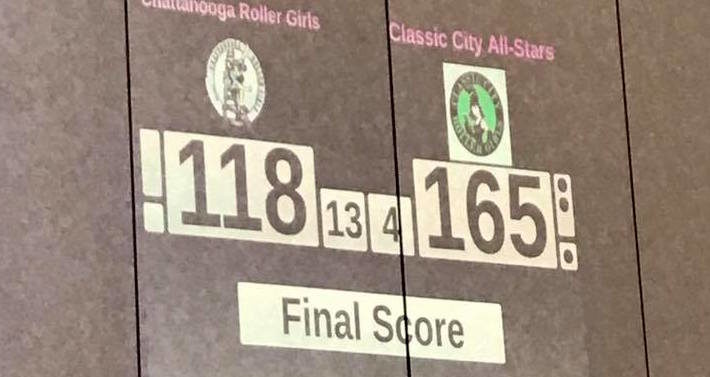 Those in charge couldn’t agree on a single tint, style or wattage of lightbulb, so the overhead illumination in Exhibit Hall C at the Chattanooga Convention Center is scattershot and mildly psychedelic. The beer selection at the concession stand is less interesting.

Flagpole sipped bottled water and wondered silently if the Chattanooga Roller Girls always took the home track during pregame introductions with choreographed moves set to the Quad City DJs’ smash hit “C’mon ‘N Ride It,” or if sometimes other train songs are used. Regardless, we love the Choo Choo connection. And overall, the entire Chattanooga experience was extremely positive. For a good time (food and beverage-wise), visit Clyde’s on Main, 2 Sons Kitchen and Market or Universal Joint. All are great.

But the Classic City Rollergirls, in their final bout of the season, were not tourists. The visiting squad with a strictly-business attitude has enjoyed a long history with the ladies from Tennessee, and the teams didn’t waste any opportunity to impress, thrill and awe last Saturday night’s standing-room-only crowd.

Neither team staked a claim to lead jammer status in the first jam of the bout, so with nothing to do but score (or be) points for two minutes, Louis Strongarm obliged, dropping 20. Jammers Crazy Cait Lady and Rumbalina followed suit, keeping the shutout alive—and after three jams with just over 25 minutes on the clock, CCRG was up big, 24-0.

Chattanooga, the city, has a rich mining history—and in that spirit Chattanooga, the women’s flat track roller derby team, began to chip away. Back-to-back nine-point jams by Goldie Knocks and Tamara Obscura brought Chattanooga within four points, 40-36, with 14 minutes remaining in the half. Moments later, they took their first lead of the bout, 45-40, thanks to five hard-earned points by Violet Heart-Breaker, the longtime derby veteran skating in the last bout of her career.

The next five minutes of action were absolutely grueling. Defenses were unflinching. Every point was paid for with pain. Every jam featured 10 tired faces. Two more lead changes later, Chattanooga took a 67-58 lead into halftime.

CCRG head coach Rocksteady, who announced earlier in the week that this would be his final bout at the helm, must have delivered one hell of a Knute Rockne-esque ‘win one for the Gipper’ speech at halftime. Or not. Whatever. Classic City made all of the necessary second-half adjustments. They changed the defensive assignment on Goldie Knocks, virtually neutralizing her—and they took advantage of their power jam opportunities.

Crazy Cait Lady’s 14-point effort in the seventh jam of the second half gave CCRG its first lead in ages, 94-83. A few moments later, Monster found herself in the same position, without an opposing jammer, and gladly extended the lead 113-83. Chattanooga scored three quick points, closing the gap 113-86. The crowd came to their feet for Violet Heart-Breaker when she hit the line to square off against Louis Strongarm in the most memorable jam of the evening. Strongarm earned lead jammer status, but quickly found herself in an impossible, stingy mess at Turn One. She wisely passed her star helmet cover to the pivot, veteran Elizabeth Impaler—back from a broken leg she suffered in late May—who proceeded to score 13 points, putting the visiting team up 126-92 and all but extinguishing any thought of a comeback by Chattanooga.

Beyond the Black Lodge: Pair Fire Walk With Me With a Political Comedy