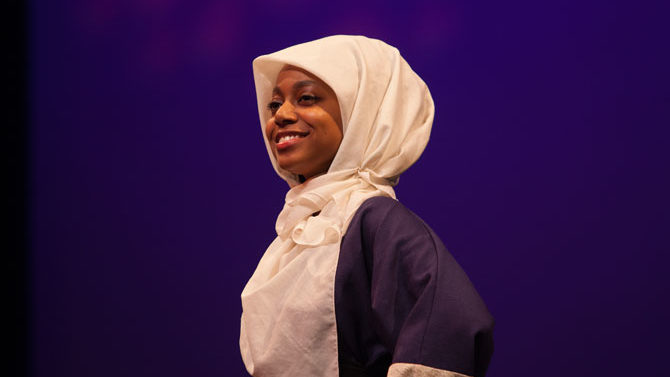 Though Hanna Holley stood center-stage to be crowned Miss UGA of 2017, Maryam Miller stood proud and accomplished stage-right, cheering for her peer. She had just completed an intense round of five competitions.

The first was that of the swimsuit, the cornerstone of pageantry. Before the other 20 women walked the stage in heels and two-pieces, slowly turning in front of the judges to exhibit the smoothness of their legs and the flatness of their stomachs, Miller made her way down the stage in a burkini, a full-body garment traditional Muslims wear for swimming.

Miller was born Maryann Shakir, but her intended name has been replaced with something more conforming to American standards. (Her parents were married under Islamic law, but not civilly.) Raised in Chandler, AZ, she is in her last semester of graduate school studying educational administration and policy. The scholarship awarded to Miss UGA was part of her motivation for entering the pageant, along with the micro-aggressions she’s fought against in order to reclaim her identity, and the memory of a close friend.

That friend, Brittany, was disabled and wheelchair-bound. But according to Miller, “she loved without a reason.” After the recent death of Miller’s grandmother and Brittany’s death the week before the pageant, Miller reminded herself of the words of Wayne Dyer, a philosopher and motivational speaker: “Don’t die with your music inside.”

Miller let her music out when she took the stage for the talent competition, the second of the night. Being competitor No. 1, Miller was again first to take the stage, setting the precedent for the other contestants. She brought a tone of fearlessness to the silent auditorium when she delivered an a capella version of “Lift Every Voice and Sing,” often dubbed the “Black American National Anthem.”

Singing is not Miller’s strongest suit, and her parents nudged her toward spoken word, but she had a dream that she would sing that song. “The crazy thing about fears is, as soon as we face them, they don’t matter anymore,” Miller says. “I feel good about having gone through with it.”

Miller’s true talent is writing. She has published one book, Proceed to the Root, and a second, tentatively titled Letters From the Legal Maryam, is in the works. The first book includes 21 concise reflections on life, coinciding with the African proverb, “If you want to go fast, go alone. If you want to go far, go together.”

Miller explains, “I basically take readers through mirages of the dimensional soul, or what is known in Arabic as al nafs, using the God Positioning System, or GPS. In the process, we unearth the knowing that we are never alone. More than anything, it’s a gift of love from me to the readers with my flaws exposed, with the hopes that, as they see my transformation, it might also spark theirs.”

Next came the onstage question. Miller was most nervous for this portion, but she made her way to the microphone, fished a slip of paper from a bowl and stood poised as Annie Jorgensen, 2016’s Miss UGA, read the question. When asked her opinion about speaking politically, Miller replied that she can’t claim expertise but would “readily share my opinion in the spirit of authenticity.”

“Politics is ubiquitous,” Miller explained post-pageant. “Every little thing we do is a choice that is reflective of our political views and where you stand. Even if you say you’re not political, that in itself is a political view.”

Miller’s politics are reflected in her research, which she describes as “a metaphysical pedagogy of the oppressed… It’s looking at both the immediate needs of the people and also the higher callings that individuals have, particularly those who are oppressed.” She believes there is a disconnect between information and transformation, and is concerned with looking at the “dotted line between the mind/body split.”

Miller hopes to use her degree to work with women and the next generation. After realizing a close friend was going through abuse, she developed her platform issue, No Excuse for Abuse, working with women who have experienced physical abuse, as well as aiding in a support group called Selah—which means to pause or reflect—through Project Safe.

The fourth and final competition was evening wear. Miller wore a dark blue dress with wide sleeves and white trim, her head covered. The UGA hockey team had been employed to escort the ladies, arms linked, to mid-stage, where they would begin their walk to the judges. Despite backstage imploring, Miller stood firm on her decision to not link arms, based on her religion’s teaching that physical contact between marriageable people should be minimized.

Though she was raised in a practicing Muslim household, Miller has her own ideas about the names given to things. For example, she believes the term “Loving Sustainer” is a more accurate description than “God” or “Allah.” “We have to get to the essence of what we mean when we say these terms,” she says.

“I don’t necessarily say I’m Muslim,” Miller says. “I say my inner peace is my path, purpose and way. Because that’s what the root of the term linguistically means—Islam is peace, variations thereof.”

While most of the competitions occurred on stage, personal interviews were conducted the evening before. The judges wanted her to be light and talk about her hobbies—zip-lining, yoga, hiking—but “as an individual and as a member of various social groups, it’s not really a time of lightness. It’s not a time of rejoicing,” she says. Instead, Miller chose to read a letter from her late friend.

“It was an exercise in assertiveness,” she says of the interview, and of the pageant as a whole. “People aren’t always going to be receptive, and that’s OK, because at the end of the day, it doesn’t matter what people think.

“I am willing to be vulnerable with what I show to the world,” she says. “It challenges you to define yourself.”