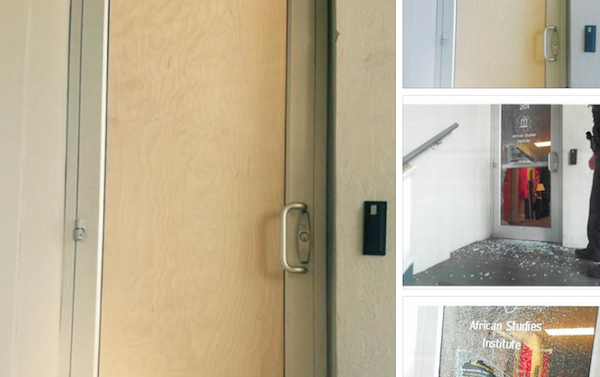 University of Georgia police were contacted Sunday afternoon after visitors on UGA’s North Campus noticed that an exterior glass door had been shattered at the African Studies Institute in the Holmes-Hunter Academic Building, named for the two black students who integrated the university in 1961.

According to a statement released by UGA police, “the door was found to have damage to the lower half, consistent with being kicked.” The reporting officer contacted UGA Facilities Management Department to secure the door and clean up the glass. There was no other damage to the building.

However, no employees of the ASI were contacted, and the office manager arrived at work Monday morning to find the door boarded up, said Akinloye Ojo, director of the ASI, in a mass email to the ASI community on Tuesday morning.

“Unfortunately, the police did not notify any one of us in the office, and given the current political climate in the country, a lot of nerves were rattled,” Ojo said.

Reports of the incident spread on Facebook after Tifara Brown, a student worker at the ASI, posted photos and information about the incident, calling it “a simple act of intimidation.”

Questions about whether the vandalism was a hate crime have arisen, but at this point, UGA police say there is “no evidence to indicate that this incident was a hate crime,” citing the lack of further damage and absence of “notes, graffiti, postings or utterances of any kind that would indicate the intent of the perpetrator.”

While the UGA police continue to investigate, Ojo said it is “difficult to dissuade those who rightfully worry that it might be a targeted attack. Quite a sad commentary on the state of things in the country.”

As an African-American student on the UGA campus, Brown said that she “understands the importance of responding to these incidents using wisdom and not act out of rage.” While she and other students have been upset by the incident, “I feel that I have even more of a duty now to ensure that my peers are uplifted and that we [African-American students] as a community within UGA, and as the entire UGA community, stand unified on behalf of our faculty, staff and students,” she said.

If you know anyone who may have witnessed this incident or have information that would aid in the investigation, contact the UGA Police Department at 706-542-2200.