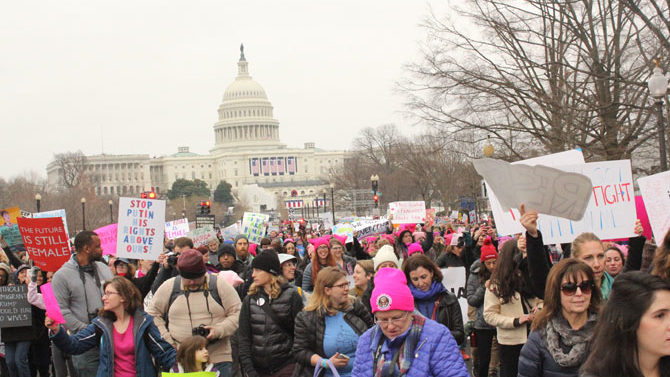 While crowd estimates range from 500,000 to a little more than 1 million, one thing is clear: There were more pink-hatted protesters there than anyone anticipated.

On Jan. 21, the day after President Trump was sworn into office, hundreds of thousands of women, men and children took to the streets of Washington, DC to show support for common causes. Within that crowd were hundreds of Athens residents who took buses, planes, trains and cars to be a part of the event.

“I really wanted to be physically present for the march because I just wanted there to be a solid turnout, and I wanted to do my part  to make sure there was a visible force of people showing up who care about this,” said Janet Frick, a University of Georgia professor who drove to the march with some friends. “And I really did feel it would be historic.”

All Roads Lead to D.C.

No matter how marchers traveled to Washington, DC, the primary mode of transportation the morning of the march was by Metro. Lines formed hours before the first speakers were scheduled to take the stage at 10 a.m., mainly so travelers could purchase fare cards. But at one point in the morning, those arriving at RFK Stadium, where the out-of-town buses were staging during the event, faced a two-hour wait to get on the subway. Many ended up making the 45-minute walk to the protest site instead.

Those initial Metro lines, formed so early in the day, served as a good omen for Athens resident Tiffanie Reid, a personal trainer and stay-at-home mom who flew to the march and stayed with friends in Maryland.

“We came into the train station, and people were getting anxious about getting to the actual event,” said Reid, who encountered full parking lots and lines at the Metro by 8:45 a.m. “But someone in my group just looked at us and said, ‘Hey, the rally starts now.’ So it kinda changed our mindset, and we realized it was awesome that we were with all these people.”

After initial permitting snafus—organizers of the Women’s March on Washington were among more than a dozen organizations that had requested permits to march on the National Mall, and so logistics needed to be sorted out—the march centered around a stage on Independence Avenue between the U.S. Botanical Garden and the National Museum of the American Indian. Large screens were also set up along Independence Avenue for the overflow crowd that filled up the street on Saturday morning, but many marchers ended up waiting to march without any view of the stage, or within earshot of what was going on there.

By mid-morning, the streets were already congested with march participants making their way to the National Mall and Independence Avenue. Friends hoping to connect were at the mercy of their phones’ networks to stay in touch, as many could do little more than text due to the number of people. Many used GPS tracking apps to try to connect, but found it impossible simply because the crowds were so thick. “When we had service, we could check in,” said Reid, who was hoping to connect with other friends who had come from out of town. “Sometimes I would find I was less than a block away from them, but there was no way to get to them.”

General protest guidelines passed around before the march urged participants to march with a buddy. But by the time the speakers had started and thousands had found their place in and around the area, many began to realize that the people standing next to them were also their marching buddies. Women with small children chatted and offered support within the throng. Sign holders who were blocking a view were happy to adjust. People shared water, snacks and seats.

“It was extremely powerful. I have never been in a crowd of that size,” said Tamara Haag, an Athens resident who flew to Baltimore and took a train to Washington. “And then typically, being in any kind of crowd, you get jostled and people tend to be rude. But everyone was so kind and accommodating and respectful. It was such a positive vibe.”

The march participants were overwhelmingly white women—many topped with a pink “pussy” hat as a way to reclaim Trump’s recorded comments to “Access Hollywood” host Billy Bush leaked last October. But there were men, women of color, children and others who joined the throngs. “There were people in wheelchairs, people who were blind, people who were gay,” Haag added. “It was just a very diverse crowd, with the acknowledgment that the majority were white women.”

Many march participants can now look back on a particular point in the march when the magnanimity of the event hit them. For some, it was realizing that the planned marching route—from the stage and down Independence Avenue to the Washington Monument—was already clogged with people, with not enough room left to march. For others, it was hearing about a friend’s teenage daughter who passed out and became separated from her family, only to be reunited hours later after she was taken care of by random strangers. “I got emotional when I saw kids my kids’ age there, just thinking about how we have the ability to shape our future in that way,” said Reid.

But it’s one thing to attend a large-scale march, digest the event and come home knowing what you were a part of. It’s another thing to take that event and turn it into action moving forward.

That’s the goal of the organizers of the March on Washington, who now have 10 calls to action for participants to do in the first 100 days of the Trump presidency. For many marchers, following up on this call to action was a key point now that the march is in the past.

Haag said she sees the march as galvanizing support for a movement similar in political nature to the tea party—just with progressive values. Lots of people felt complacent going into the election, she said, including herself. But now it’s time to change that.

“I felt I couldn’t do more volunteer work than I could do while raising two children and working full time. And then the election proved I had more room for more activism in my life,” she said. “In general, in the summer, after all the events that happened—[the shootings at a gay nightclub in] Orlando, police shootings—I had started going to some Black Lives Matter events. So I plan to continue to help wherever I can with those efforts, and also be a much more invested constituent.

“We all need to let our representatives know what we want,” Haag said. “We have to be more vocal about that.”

Frick said she saw the march—and the movement in general—as a chance to educate herself on different social movements in this country. Typically, women’s movements were initiated to benefit white, upper-class women, and that should be addressed. She said that it’s important to support grassroots candidates, too, to try and counter the gerrymandering and other tactics that have stacked the deck in Georgia in the Republicans’ favor.

For her part, Reid will be writing postcards this weekend to her elected representatives.

The true test of the power of the Women’s March on Washington could come with the next midterm elections, added Frick.

“What’s coming down the pike in the current Republican Party is kinda scary. We need to have an answer,” she said. “What are we standing for? What do we think will make America better? What are we working towards?”