Athens Schools and Youth Groups Are Building a Sustainability Army 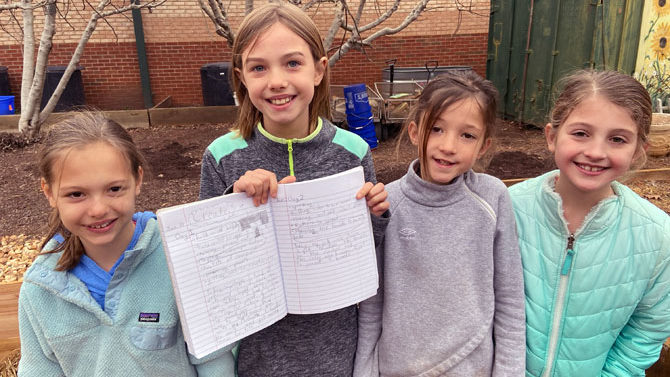 One of my most vivid memories from my childhood is my mother, returning from the town dump, upset that the man who ran it refused to start recycling. It was the 1990s, and we lived in a small town, so recycling was a thing but not too common in our parts. She pushed and fought and eventually, lo and behold, our tiny town started recycling.

I’m still drawn to that memory today because of the sea change that’s taken place. Today, my daughter is about the same age I was when my mother waged her recycling war, and recycling for my daughter is so well folded into everyday life that it’s considered odd not to recycle. In fact, in her school and most others in our area, both recycling and composting are as natural a part of lunch as picking up a tray.

As I and other Gen Xers grew up amid increasing awareness of our environmental issues, the task of righting the wrongs seemed—and still seems—overwhelming. It’s easy to feel discouraged. And yet, we’ve managed to infuse environmental awareness and sustainability into our children’s lives. Things might have been messed up when we came into this world, but gosh darn it, we can at least do our part to improve it through our children.

When I had the chance to walk around Rocky Branch Elementary School in Bogart, I found a renewed sense of hope. Here, third grade teacher Shawna McGrath began gardening with her students about a decade ago (third grade includes lessons about plant biology), and the project has since turned into a schoolwide effort that includes chickens, a fruit orchard and a rain garden filled with milkweed for pollinators. Kindergarteners recycle plastic bags—weighing and measuring them before they are shipped off—and in return, the school gets benches made out of them. First graders plant flowers with high schoolers, while kids in all grades compost for the gardens, recycle and learn about the issues facing monarch butterflies through their newest garden in a stormwater detention area of the property.

Oh, and the school’s garden club tends to the raised-bed gardens throughout the year, and the produce they harvest is used by the school’s cooking club to prepare weekly meals for five local families in need.

While Rocky Branch’s sustainability efforts go above and beyond, it’s also an example of how teachers and students can help move the needle in schools and have a large impact. Here in Clarke County, recycling and composting are the baseline. From there, you’ve got gardens, clubs and student-led projects. Often, students take on projects—like improving watersheds on school property at H.B. Stroud Elementary and St. Joseph Catholic School—that are folded into what they’re learning in the classroom. A garden project, for example, incorporates mathematics (counting seeds, calculating soil volume and percentages of its components, time for growing, etc.), science and even language arts (students at Rocky Branch keep journals about their plants, for example). The latest project at Rocky Branch takes it a step further to involve STEAM components, as the students use an online tool to create 3D models of a new rocket ship-shaped garden bed.

For example, members of Girl Scout Troop 12199 were concerned about the amount of plastic in the ocean. So, they did some research and discovered a way to help people remember to take reusable bags to the grocery store. Now, throughout the year, troop members get together to add beads to large wire rings (generously shaped by the husband of troop leader Natalie Peterson) and sell them as a fundraiser. The rings—dubbed “baglets” by the troop members—have helped fund a trip for the girls to visit the Galapagos Islands later this year, so they can see firsthand the benefits of clean oceans.

Peterson says it’s about more than making baglets, though. The project has spawned a variety of ways for the girls to learn—and teach—about environmental responsibility and sustainability. Troop members have taken part in cleanups hosted by Rivers Alive, hosted a booth at the Athens Water Festival to show how plastic bags can be woven into portable seats, visited the county’s water reclamation center and created movies for Athens-Clarke County’s Ripple Effect film competition. “They understand why, and they come up with ideas,” says Peterson. “They notice it everywhere.”

When they meet at Jittery Joes, they even make a point to skip the straws.

It’s been driven into my head over the years that the only way to make headway on environmental issues is to get large corporations to sign on to sustainability solutions—for Walmart to switch to solar power, for example, or for manufacturing plants to commit to zero waste. But upon learning Rocky Branch’s school-wide theme, “One Child, One Class, One School,” it’s helped me reframe the point. Sure, it would be great if all our industries switched to solar power. But that takes time. And while time clicks by, our kids are getting older and wiser to the ways of sustainability.

It might take longer, but I can see future generations sitting in board rooms not asking but full-on expecting their company to be more green. We’re creating an army of sustainability experts, which is probably the army we need for the challenges we’ll be facing in the future.