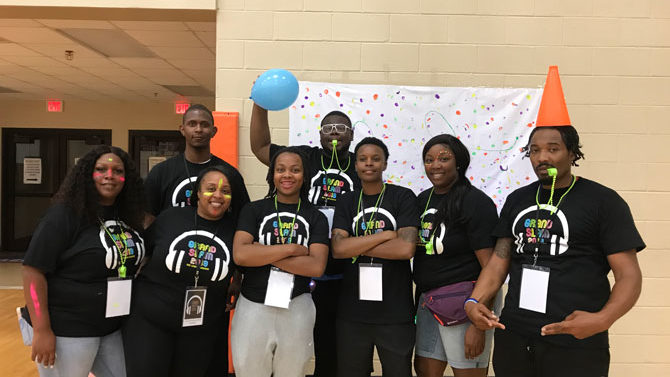 Let’s consider, for a few minutes, kids between the ages of 11–14. It’s an interesting age, right? You’re old enough to think you know enough to gain some freedoms and test the waters out in the big world, but you’re still too young to drive, hold down a job or, depending on who we’re talking about, even be responsible for much at all.

The needs of kids this age are complicated. They need new experiences and space to grow, but they also need some supervision and structure. And here’s another secret: They know when grown-ups are watching out for them, even if they act like they don’t.

This is why Friday nights this summer have been so groundbreaking: They held space for these kids at Cedar Shoals High School through the resurrection of a program called Grand Slam. Each week, 85–120 preteens and young teenagers could come, no money required, and take part in activities led by community volunteers. There was music, there were snacks, there was supervision—just enough to be cool, anyway—and there was, according to lead organizer Kirrena Gallagher, a transformation among the kids who attended.

“It’s building confidence in indirect ways,” she says, recalling one request she had of participants as they lined up for a snack: Say one positive thing about themselves.

Just having that consistency was huge, she says. She also heard from parents who noticed their kids were motivated at home because they wanted to come back for another week of Grand Slam. Parents tied their attendance to cleaning their room, and others simply noticed their kids taking care of themselves or acting with more confidence. “I hope all these kids who participated in Grand Slam this summer walk into school with more confidence,” says Gallagher, who worked with several community partners, such as Athens-Clarke County Leisure Services, ACC Transit, ACC Police and the Clarke County School District, to organize the weekly events.

Gallagher knows a thing or two about how well Grand Slam works. She was one of its participants 20 years ago, in the 1990s, when Grand Slam was a regular, county-funded event at Bishop Park. Officially started in 1989, it took place on Friday and Saturday nights for a similar age range of kids, and they had the run of the place: swimming, tennis, softball, baseball and basketball outside, and inside kids could take music lessons or do gymnastics.

The program ended around 2008—some reports state 2013, but she disputes that—partly because the location changed and attendance dropped, but also because the county cut its funding.

But with the success of this summer’s program, Gallagher says, it’s worth the county taking another look at the budget. Because, sure, this kind of regular program comes with a price tag, but it’s also an investment in our kids and our future.

“As a community, we need to better prioritize the people who matter the most: our children,” she says. The bottom line is, If we create a safe space for kids in one of the most impressionable age ranges, we cultivate their confidence, creativity and sense of place. That investment ends up getting repaid through our children giving back to their community, through their own volunteer service, work experience and college educations, rather than the opposite spiral that ends with the expense of the criminal justice system.

The kids who spend time in programs like Grand Slam also get to interact with adults whom they see in the community. Remember when you would go shopping with your parents and see one of your teachers at the grocery store? Now, expand that network of adults. Sure, it’s a little awkward, but it’s also another way you’re connected to a larger community.

And, Gallagher adds, kids know when their community cares about them—and when it doesn’t. Grand Slam is a way to let local kids know that they matter, and that their local government and community see them and recognize them.

“This was a place where my mom was OK with dropping me off, and she knew I was going to be there without her supervision. That made my world a bit more of a trusting place,” says Gallagher. “And I realized that my community said, we are teenagers, and here is a space for us, and there are no unrealistic expectations. The only expectation was for us to behave. So, I was allowed to be a child in the summer.”

Gallagher hopes this effort can spark a new generation of Grand Slam kids. We know kids need to be active, and we know kids need to be trusted. So, she says, if we can get those things together into one space, kids can grow up within the arms of their community knowing they got something out of it.

This summer’s effort was small—Gallagher had space for up to 250 kids, but often didn’t reach that capacity, and her staff were all volunteers—but the results were mighty. If you would like to see something like this continue during the school year and into the future, she urges parents and others to make their voices heard. Call your commissioner, and call the mayor. “We can’t talk about solutions for things that need to happen and not be willing to put more money forward,” she says. “They’re not just our children—they’re our community’s children.”