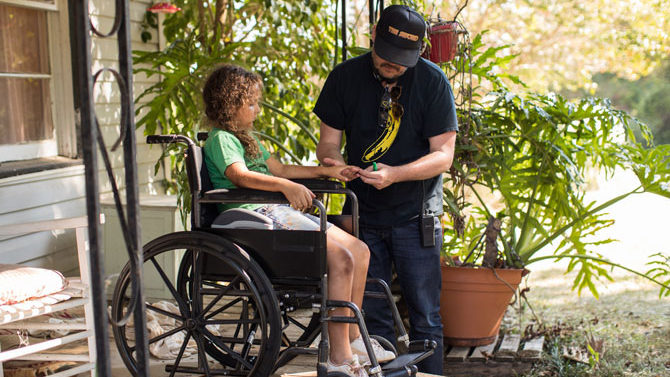 Protests from the film industry against Georgia’s “heartbeat” abortion bill haven’t dampened productions making their way to Athens, according to local officials.

While the past year hasn’t broken any new records, work in Athens-Clarke County has been steady and similar to last year, says Jeff Montgomery, the county’s public information officer, who also serves as the community’s “camera-ready” liaison for the Georgia Department of Economic Development. Requests for filming that come through Montgomery’s office range from B-roll for travel companies to projects by students from the University of Georgia or the University of North Georgia.

But a few projects gave Athens a little more airtime, even if the city isn’t immediately recognizable. For example, says Montgomery, the Zaxby’s commercial that aired during this year’s Super Bowl was filmed in downtown Athens. A feature-length film, Charming the Hearts of Men, starring Kelsey Grammar and Sean Astin, was filmed earlier this year in the Boulevard neighborhood. More recently, the pilot for a 12-episode series, “Mayflower,” was filmed in downtown, including drone shots above City Hall.

Also, film and Athens music heritage may intertwine in the near future as Tweed Recording opens downtown. The recording studio and school will be opening soon in the former home of Lamar Lewis Shoes. “Tweed Studios may have some impact with some of their future plans with film scoring and audio tracking for productions,” says Montgomery.

It helps that Athens has some built-in connections to the film industry. For example, Charming the Hearts of Men was written and directed by Athens native Susan DeRose (who now lives in Atlanta). It tells the story of a woman in the 1960s who returns to her Southern hometown and, pushing back against the discrimination she faces, inspires historic legislation to protect women.

Alex Kahn, a location manager who worked on the film, says DeRose was interested in coming back to her hometown to film. It was Kahn’s first time working in Athens, but he says the city made it easy to get permits, and he feels we will be seeing more, bigger projects in the near future.

“Mayflower,” which will be pitched to streaming services as an expanded series, is produced by Jeremiah Bennett, who grew up just outside Clarke County’s eastern border.

After attending Athens Technical College, Bennett went on to Georgia Perimeter College before making the jump into the film industry. His first big break came from the “Honey Boo Boo” series. What started as a temp job offered on Craigslist turned into a production assistant position and then, by the second season, associate producer.

“I ended up doing like 37 episodes—three or four seasons with them,” says Bennett of his “Honey Boo Boo” experience. While living in Middle Georgia, he decided to launch the Eatonton Film Festival, which is now the Milledgeville-Eatonton Film Festival and counts more than 700 entries from more than 50 countries.

“Mayflower,” written by Milledgeville native Chris Danuser, won a screenwriting award at the festival. Bennett didn’t get connected to the script until more recently, though, when Danuser approached him about producing the project. While some scenes for the pilot episode were filmed around Milledgeville, Bennett said he felt Athens was a better location for the storyline.

“It’s a proof-of-concept episode, and Athens is part of the bigger picture,” says Bennett. [Danuser] has family in Middle Georgia, but I was like, ‘OK, there’s a federal building [in Athens], this is the right sized town. A whole series can happen here.’”

“Mayflower” is about a man whose son dies while serving in Afghanistan, and the event exposes a dark side that turns to domestic terrorism. The script sets the storyline in a small Georgia town—with Athens’ size fitting the bill.

Athens also has the infrastructure to support a production crew. The Milledgeville-Eatonton Film Festival is hampered by lack of hotel rooms, he says—even his own crew of 25 people ran into issues when their filming timeline overlapped with parents weekend at Georgia College and State University. “There’s a Comfort Suites—there’s nothing for A-listers unless you put them in a property on the lake,” he adds. “Here in Athens, you have the Hilton Garden Inn, you have Hotel Indigo, you have the Hyatt.”

Bennett adds that he’s felt a willingness among local officials to welcome the film industry and address any roadblocks that may thwart future projects. He took part in one of two meetings hosted by Mayor Kelly Girtz and the Office of Economic Development to talk about the film industry and ways to encourage it, and Montgomery says he plans to have a guide to filming in Athens done by the end of the fiscal year.

“I shot my first short film in 2006 here, and this is a town that loves art,” says Bennett. “I called them up, had a couple of conversations, and we flew a drone over City Hall today. That’s what it takes to get films produced here.”