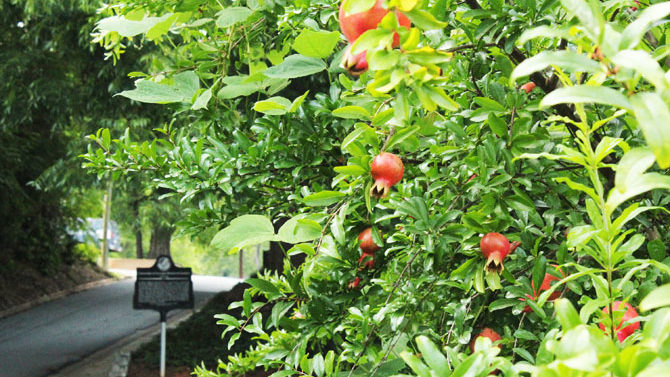 An idea for a kudzu-infested block along West Broad Street could unite the various neighborhoods surrounding it and create a space for residents and visitors alike—but it has some tall hurdles to overcome.

Andrew Lundstrom, a recent graduate of the University of Georgia’s College of Environment and Design who now works in Atlanta, has proposed a plan to revive the historic UGA botanical garden created in 1833. The garden sat on a 4-acre site roughly bounded by Reese, Pope and Finley streets on the north, extending across what is now Broad Street and to Dearing Street.

Today, the only remnants left of that first teaching garden are a few fruit trees behind the former home of its founder, UGA horticulture professor Malthus A. Ward, on Dearing Street. A sign erected three years ago near Reese and Pope Park also notes the garden’s history.

Lundstrom says a reinterpretation of the garden on this site could do more than recall the past—it can be a jewel in the crown of this historic section of Broad Street.

“It has been essentially park space and public space from the very beginning,” says Lundstrom, noting that even today, the area surrounding the stream behind Ben’s Bikes is home to a fruit-tree garden open to anyone to explore, along with the public park across from Hill Street Baptist Church.

Yet while Athens has added thousands of new bedrooms in recent years, it has little new public green space in the downtown area. This park, Lundstrom says, can not only be a community asset linking several historic neighborhoods along the commercial corridor, but it can also be a respite for visitors looking for a bit of shade downtown.

“Athens has a lot of really good outlooks for the future—adding new bedrooms, new hotels, business conferences, events. It’s a great location, and it’s bringing a lot of business to a lot of people,” he says. “But I just know there’s going to be a point where we ask, ‘Where are all these people going to go?’ [The garden] literally knits together these communities so that we can have functional, beautiful space for people to gather. Right now you can go to the Classic Center—which is all indoors—or you have to walk on concrete streets with few shade trees.”

The garden’s location, from a historical perspective, places it squarely at the intersection of vastly different neighborhoods. To the north is the Reese Street Historic District, a traditionally African American neighborhood of modest mill houses and bungalows that is fighting to retain its owner-occupied homes amid pressures from landlords and outside development. Across Broad Street to the south is the Dearing Street Historic District, which comprises larger homes, as well as the Tree That Owns Itself.

Whether the garden followed the segregated rules of its time is open to debate. Little documentation of its use beyond academics remains, although Lundstrom says its small pond and a former library on the site point to it being open to everyone, regardless of color, as does its location across from the site of the former Athens High and Industrial School, the state’s first four-year African American high school. One neighborhood activist unfamiliar with the garden’s history notes that at the time, though, people of color “were more likely to be working in the garden rather than enjoying it.”

The block’s topography and zoning do create some issues for a large-scale development, such as a student apartment complex. The less than 2 acres of commercial property along Broad is zoned commercial-general, which allows uses such as hotels and big-box stores, as well as residential units above commercial space. But there can only be a maximum of 24 bedrooms per acre. Also, a stream that cuts through the block would require a 75-foot buffer around it.

Lundstrom says a local developer has worked with him to create a plan that accommodates a reinterpretation of the garden while also allowing for commercial frontage on Broad Street, with the idea that rent from the businesses would go back into the garden for ongoing maintenance. There are concerns that at least a portion of the block is already under contract to be developed, but local real estate agent Jamie Boswell denies those claims, saying the properties are available (“for the right price,” he adds, acknowledging a recent uptick in land values now that owners are aware of the interest).

At this point, Lundstrom is gathering public support for the project, as well as working out partnerships with other organizations, including the Athens-Clarke County government. He’s also beginning the fundraising process with the hope of acquiring the land before it’s spoken for by other developers. More than 300 people have signed a petition supporting the garden plan, although Lundstrom notes, “Bottom line, we can’t do anything without the land.”

Resident Sara Baker has signed on to help Lundstrom promote the effort and agrees that downtown needs more green space. The park is also a chance to unify an area that seems to be swelling from new development.

“This is a place where we have people coming together from different walks of life, so this just really spoke to me,” she says. “As I watch all these developments downtown, they seem to be thrown up without much planning for the overall vision for our community. This [park] is in the direction of a bigger vision for our community, not just the expedient thing to make money at this time.”